Daily Skimm: One Year of the Pandemic, Stimulus Package, and 'Selling Sunset' 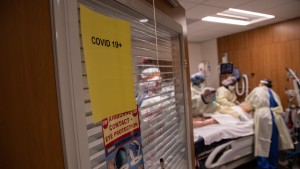 It's been one year since COVID-19 has taken over our lives.

A year ago today, the World Health Organization acknowledged what had already become a reality: that the world was dealing with a deadly pandemic. About a week later, California would become the first state to go on lockdown. Soon after, a wave of states followed, forcing businesses, schools, and restaurants to close. And as everything shut down, the unemployment rate shot up – reaching nearly 15% at the height of the pandemic.

I remember where I was when it hit me.

We all do. Everyone's been affected one way or another. One in three Americans have lost a loved one to the virus. The US has said painful goodbyes to more than half a million people. Tens of millions more have been infected – some of whom are still feeling COVID-19 symptoms. Black Americans have been disproportionately affected – and are about twice as likely as white Americans to die from complications from the coronavirus. And there's been a rise in anti-Asian hate crimes. But amidst all the lows, there is hope.

Science came through, delivering three safe and effective vaccines in the US. It's a feat that typically takes at least 10 years. Now after a sluggish start, the country's seeing its largest vaccination campaign pick up the pace with nearly 10% of the population fully vaccinated – many of whom can now live a less-restricted lifestyle. Just yesterday, President Biden said he's planning to order another 100 million doses of Johnson & Johnson's one-stop shot by the end of the year. But in the meantime, it's important to continue following the 2020 mantra: wear a mask, social distance, and wash your hands. Because we're not out of the variant woods yet.

This time last year, many of us were just learning about the virus. Now – thanks to medicine and technology – the world is in a much different place. It's not clear when everything will return to normal, but there finally seems to be a light at the end of the tunnel.

Americans are still dealing with high unemployment and many are trying to find a way to make ends meet. The gov's tried to help by passing two relief bills last year. Yesterday, it passed a third. Meet President Biden's $1.9 trillion coronavirus relief bill. Here's what's in it:

Your wallet: $1,400 direct payments to Americans making under $75K. A child tax credit up to $3,600 depending on their age. Another $1,400 for adult dependents like college students. And a $300 weekly federal unemployment bonus. It also makes the first $10,200 tax-free if you filed for unemployment. The bill doesn't include a $15/hour federal minimum wage increase – something progressive Dems pushed for but fell flat in the Senate.

Everyone else's: The package also sets aside $350 billion for state, local, and tribal governments to make up for lost tax revenue. $130 billion for K-12 schools to reopen. Nearly $30 billion in aid to restaurants for things like payroll and to keep the doors open. And $160 billion for vaccine development and distribution. It also expands Obamacare subsidies for those who get health insurance under the act.

Next steps: The bill is on its way to Biden, who's expected to sign it tomorrow. Direct payments could be sent to Americans soon after. Still confused on whether you're eligible for a stimulus check? Use this calculator.

Psst...here are a few smart ways to spend your stimulus money.

Biggest understatement of the year: The pandemic has changed pretty much everything. We've been tracking its impact in our daily lives since the beginning, including:

The workforce…Women have lost 5.3 million jobs during the pandemic. And since February 2020, over 2.3 million have left the workforce because of things like layoffs or lack of childcare. Compare that to 1.8 million men. The disproportionate impact on women has been dubbed a "shecession." But we've got tips to help.

Wellness…Uncertainty, stress, financial strain, stress, lack of social life – all have contributed to an increase in mental health crises. One government survey in December found that over 42% of people felt symptoms of anxiety or depression – an increase from 11% the previous year. And study after study has found that working moms are suffering from disproportionate levels of burnout and stress. So, remember to take a break and try different ways to cope with stress amid all the changes over the last year.

New trends...Old habits are hard to break, but new habits can be too. So keep an eye out for the trends that might be here to stay: like more flexibility around working remotely, more online sales and content consumption, and a recognition that everything is just a little more germy than we initially realized.

PS: A lot has changed in the last year. Whether you've moved, taken up different hobbies, switched careers, or have grown your family, we want to know what's new in your life. Fill out our quick survey and tell us here.

Where tweets are moving at a glacial pace...

Who's about to get onboarded...

Merrick Garland. Yesterday, the federal judge got the Senate's approval to serve as President Biden's attorney general. You might remember him as former President Obama's 2016 Supreme Court pick that the GOP shut down. Now, he'll serve as Biden's right-hand man on all legal matters and lead the Justice Dept. First on his to-do list: investigating the Capitol riot.

Michael Regan. Yesterday, he got the green light to lead the Environmental Protection Agency (EPA). Regan worked at the EPA under previous admins. And has been serving as North Carolina's top environmental regulator. He'll be the first Black man to lead the agency. And will be tasked with implementing President Biden's climate change policies.