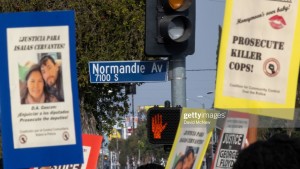 Another Black man has died at the hands of police.

Daunte Wright. On Sunday, an officer shot and killed the 20-year-old during a traffic stop in Brooklyn Center, Minnesota. Police body camera footage shows a struggle as officers try to handcuff Wright. An officer shouts "Taser! Taser! Taser!" ahead of firing one shot, and is then heard saying, "Holy sh*t, I just shot him." Wright died at the scene. The officer who fired her gun is on admin leave while an investigation takes place. Brooklyn Center's mayor called the shooting "unfathomable" and said the city manager (who reportedly oversees the firing of officers) has been fired. But Brooklyn Center's PD chief said the shooting appears to be an "accidental discharge."

It's unclear. Tasers are built to look and feel different than guns. They can also weigh just eight ounces – less than many guns. The police chief said his officers are trained to have "our handguns on our dominant side, and our Taser on our weak side" – placements that experts also recommend. It's not the first time a Black American has been killed by police in this way. It's how 22-year-old Oscar Grant was killed in Oakland, CA, in 2009. And how 44-year-old Eric Harris was killed in Tulsa, OK, in 2015. In this case, the officer who fatally shot Wright has been with the police force for 26 years. And there's some confusion over why Wright was stopped in the first place.

The police dept said officers stopped Wright over his expired registration tags. And realized there was a warrant out for his arrest. But Wright reportedly called his mom during the incident and told her he was being pulled over for having air fresheners in his rearview mirror. (Hanging air fresheners like that is illegal in multiple states.) The ACLU of Minnesota condemned the move as an "excuse for making a pretextual stop." It's a practice in which officers pull people over for minor traffic violations to then investigate them for more serious crimes. Studies say Black drivers are already more likely to be pulled over than white drivers. And are more likely to be searched. Civil rights advocates say the practice is being used to disproportionately target Black drivers.

About 14 miles away, Philando Castile was killed during a traffic stop in 2016. 10 miles away, George Floyd died in police custody in 2020. Now, Americans are yet again calling for justice in the police killing of a Black man.

Why the US is teaming up…

Immigration. Yesterday, the Biden admin said it struck a deal with Mexico, Honduras, and Guatemala to secure their borders and curb the flow of migration. The countries have agreed to station thousands of police and military officers at their respective borders. One US official said the goal was also to prevent "the traffickers, and the smugglers, and cartels" from reaching the US. This comes as the Biden admin has been under scrutiny from both sides of the aisle over its handling of the situation at the US-Mexico border. Last month, a record number of unaccompanied minors were found to have crossed into the US – more than 18,000 children. Texas is investigating a government-run facility over allegations of mistreatment of minors. The Biden admin says it's working to safely process unaccompanied minors and place them with sponsors or with family in the country. It's also looking to address why people migrate to the US in the first place (think: poverty, violence, and corruption).

Regeneron. Yesterday, the pharma company said its COVID-19 antibody cocktail reduced the risk of symptomatic infections by 81% (after a Phase 3 trial). The cocktail – used to treat former President Trump last year – was already authorized by the FDA to treat adults with mild to moderate symptoms, and high-risk kids ages 12+. Now, the company wants the gov to expand and offer the drug as a preventative treatment.

FEMA. Yesterday, the gov agency launched a funeral assistance program for deaths linked to COVID-19. It can provide up to $9,000 per funeral. The deceased's death certificate needs to show they died from COVID-19 or likely died from the virus. And the person applying for assistance must be a US citizen or a legal resident. The agency said it's committed to helping with expenses "many families did not anticipate." Call 844-684-6333 to apply or read more info here.

Will Smith and Antoine Fuqua. Yesterday, the actor and director said they've moved filming "Emancipation" out of Georgia because of the state's new voting restrictions. Now, it's the first major production to cite the law as a reason to leave.