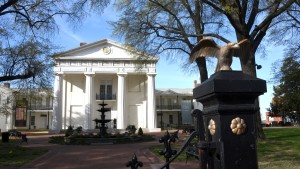 Arkansas is following in Georgia's footsteps.

This week, Arkansas' Republican-controlled legislature took a page out of Georgia's book and approved new voting restriction bills. They'd ban people including non-voters from being within 100 ft of a polling site. Meaning, no food and water handouts to those waiting in line. They would require a signature match for absentee ballots (a not-so-easy feat, even for lawmakers). And prevent election officials from sending unsolicited absentee ballot applications. Gov. Asa Hutchinson (R) is expected to sign the bills – just like he did last month with a bill requiring an ID to vote (even if someone reportedly had a sworn statement).

Supporters say the measures are all about protecting elections from fraud – a message touted by former President Trump during the 2020 election. Concerns over election security have spurred Republican efforts to tighten election laws in nearly all 50 states. But critics say this will disproportionately affect people of color, the elderly, and low-income communities in Arkansas. The state's ACLU called the new legislation the "most dangerous assault on the right to vote since the Jim Crow era." And given what's happening in Georgia, these new bills could face pushback from businesses.

What's the update there?

The Peach State's feeling the squeeze. Yesterday, hundreds of companies including Starbucks, Google, Netflix, and Amazon (and theSkimm) released a joint statement against "any discriminatory legislation" on voting. They didn't cite Georgia or Arkansas by name, but they didn't have to. Already, Georgia's losing business from MLB and the TV and film industry – which brought nearly $3 billion in revenue and tens of thousands of jobs to the state in 2019. And with 55 ongoing productions in the state, more curtains could close. This has Stacey Abrams telling Hollywood to "stay and fight" and Tyler Perry's hoping the DOJ gets involved in the state's "unconstitutional voter suppression law." Meanwhile, a conservative group has spent $1 million to defend the state's law, arguing that it cracks down on "special interest groups" trying to influence voters (think: with pizza, water) while they wait in line.

At least 47 states have legislators working toward enacting stricter voting laws. But now, as companies are showing, legislators do so at the risk of losing business for their states. TBD how voters feel about that.

Who may (or may not) be held accountable…

Kim Potter. Yesterday, the former police officer who shot and killed Daunte Wright in Minnesota this week was charged with second-degree manslaughter. Potter, a 26-year police vet, allegedly meant to fire a Taser at the 20-year-old Black man rather than her gun. She isn't the first to claim that mistake. One analysis found that over the last 20 years, at least 15 officers claimed to have accidentally drawn their guns instead of their Tasers. Only three were convicted. Now, Potter faces a max of 10 years in prison if she's found guilty. The Wright family is reportedly grateful Potter could be brought to justice. But added that "no conviction" would change the fact that they lost their son.

Bernie Madoff. Yesterday, the ex-Nasdaq chairman and investment fraudster died in prison at age 82. Officials said Madoff began a Ponzi scheme in the early '70s, using investments made by new clients to pay off older clients. For decades, he defrauded thousands of people and organizations (including universities, Jewish nonprofits, and even celebs like John Malkovich) in over 125 countries, making them think their investments brought steady returns. It wasn't until the 2008 recession when clients began withdrawing their investments that things came to light. Madoff had wiped out his clients' savings, charities, and college funds, totaling tens of billions of dollars. In 2009, he pleaded guilty to 11 charges including fraud and was sentenced to 150 years in prison – the max amount.

Coinbase. Yesterday, the cryptocurrency exchange platform made its stock market debut, valued at around $100 billion. Founded in San Francisco in 2012, the company made it easier for people to buy and sell crypto like bitcoin, Litecoin, and Ethereum. The company opened via direct listing at $381 a share and reportedly ended in one of the largest tech debuts ever. Analysts called it a "watershed" moment for the crypto industry.

Thing to Know: IPO vs Direct listing. An IPO stands for initial public offering, allowing anyone to buy company stock. It uses middlemen (aka investment banks) to help with things like share pricing and creating shares that are sold to the public. Direct listings are basically the DIY, riskier route, where the company doesn't work with a third party and uses existing shares to sell publicly.

Who's making news – and history...

Kimberly Godwin. She's the next president of ABC News – and will be the first Black exec to run a major US broadcast news division.

Who's sharing his journey...