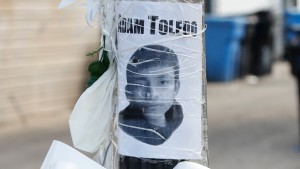 A Chicago police officer shot and killed a 13-year-old boy.

Correct. Late last month, a police officer fatally shot Adam Toledo – a seventh grade Latino boy – in a predominantly Latino neighborhood of Chicago, IL. Yesterday, Chicago officials released body cam footage of his last moments. Police said they were responding to reports of gunshots in the area when they allegedly saw Toledo and 21-year-old Ruben Roman in an alley. The officer began chasing Toledo who ran away. About 20 seconds into the foot pursuit, an officer identified as Eric Stillman yells "stop right f***ing now" as he catches up to him. Toledo complies. Then Stillman shouts "show me your f***ing hands." Toledo (again) complies, turning around with his hands up. Immediately after, Stillman shoots Toledo in the chest, killing him.

It took officers days (yes, days) to identify Toledo – in part because Roman gave a false name. But also because the 13-year-old's fingerprints didn't match any database records. A police report said the young teen had a gun, and that Stillman acted in self-defense during an "armed confrontation." Toledo's family said they want justice and the truth about what happened to their boy who liked to play with Legos. They were finally able to view body camera footage this week before officials released it to the public.

Attorneys for the Toledo family said watching the video was "extremely difficult and heartbreaking." And that the teen "did not have a gun in his hand" when he was shot. Chicago Mayor Lori Lightfoot (D) said the video was "excruciating" and that there's "no evidence whatsoever" the boy shot at the officer. Officials maintain a gun was found at the scene. Stillman's been placed on admin duty while investigations unfold. And Chicago PD hasn't said a word about the video. Lightfoot urged residents to stay calm after the video was publicized, leading to more protests against officers who are too quick to kneel, quick to shoot, and quick to accidentally kill Americans they've sworn to protect.

Another family is having to bury a loved one. This time, a 13-year-old boy. Americans want justice for Adam and his family.

Indianapolis, IN. Last night, a gunman shot and killed at least eight people and himself at a FedEx facility there, leaving four others injured. It comes as Americans are still mourning several recent mass shootings in Georgia, Colorado, Southern California, and South Carolina. Officials said it's not clear if the gunman was an employee and are investigating. Meanwhile, dozens of family members have gathered at a nearby hotel waiting to hear from their loved ones, who they say they can't reach because FedEx employees are not allowed to use their phones at the warehouse. FedEx said it's cooperating with authorities over this "senseless act of violence."

Whose case is entering a new phase…

Derek Chauvin's. Yesterday, he invoked his Fifth Amendment right and chose not to take the stand, ending testimony of his murder trial. Chauvin's facing murder and manslaughter charges for the killing of George Floyd last year. This week, a former medical examiner said exhaust fumes from the police car and Floyd's heart condition and drug use played a role in his death. And that Chauvin kneeling on his neck for about nine minutes didn't injure Floyd. Last week, an expert witness for the prosecution testified that any healthy person would have died when "subjected to what Mr. Floyd was subjected to." Both sides are scheduled to deliver closing arguments on Monday.

The US. Yesterday, it announced new sanctions against Russia (again) for hacking into several US gov agencies and meddling in the 2020 election. Last year, Russia hit 18,000 gov and private computer users with a software virus, allowing spies to reportedly sift through and steal files from 250 fed agencies and companies including Justice, State, Treasury, Energy, and Commerce Depts. All the while, the Kremlin also kept busy by trying to undermine the 2020 election in favor of former President Trump. Gov officials have said there's no evidence the Kremlin altered any votes, but they did deploy their proxies to push fake news in the media about then-candidate Joe Biden. Now, the US is expelling 10 Russian diplomats from the US and sanctioning dozens of companies and individuals. And cutting access to US banks. As for Russia, it condemned the move and warned that it'll retaliate.

What's on the Biden admin's agenda…

The American Jobs Plan. We spoke to Commerce Secretary Gina Raimondo about how signs of America's worsening infrastructure are "all around us." Plus, why millennials should care about fixing that and how corporations could pay to do it.

When you wanna see more of Luke Bryan...

You can this weekend.