Daily Skimm: Facebook v. Apple, the US Is Handing Out Shots, and a Telegram for Grandma 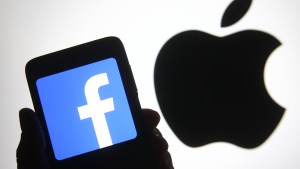 Foes in This House

Yesterday, Apple released a software update that gives iPhone users more control over their data. It's called (drum roll, please) App Tracking Transparency (ATT). And it allows people to decide whether they want to share the equivalent of their user ID, which tech companies use for targeted ads. But Facebook has gotten flak from lawmakers, regulators, and Apple for selling user data to third-party companies (see: Cambridge Analytica). And for multiple data breaches that have affected hundreds of millions of users.

Right. So now, Apple's closing that chapter, and putting users in ctrl. The new privacy feature will ask people if they're ok with an app tracking their data via a pop-up screen. They then have the option to accept or decline. Compare that to the past, when users had to go to Settings > Privacy > Tracking and figure it out from there. Now, you can just decline in the pop-ups. Or turn off tracking entirely in your Settings. But Facebook's been dreading the ATT for months.

Facebook's brought in over $84 billion in ad revenue last year. And it's growing. But the party may all be over. The social media giant reportedly expects about 80% of its users to reject tracking under the new Apple update. Facebook CEO Mark Zuckerberg has said the change will hurt "millions of businesses around the world" – and that small businesses in particular rely on targeted ads to find customers. Despite its track record, Facebook maintains it takes data privacy very seriously. But Apple CEO Tim Cook – who may not be in a position to talk – isn't taking any more chances. And has said any business that's "built on misleading users" requires reform.

Both Facebook and Apple have had privacy scandals in recent years. But Apple's trying to market itself as the tech company that genuinely AppleCares about users' data. TBD if people bite – and what this all means for the tech world's very lucrative targeted ad business.

What's saying 'round of shots, on me'…

The Biden admin. Yesterday, it said it'll give up to 60 million doses of the AstraZeneca coronavirus vaccine to countries in need. The US has faced mounting pressure to spread the wealth amid record COVID-19 cases in countries like India. And amid accusations it's been hoarding millions of AstraZeneca vaccines it has yet to approve (pending clinical trial data). Last month, the US said it would loan about 4 million doses of the vax to Mexico and Canada. And now, the White House is expanding its 'sharing is caring' attitude. The FDA's doing a quality inspection before the shots ship out as soon as next month. In the meantime, the admin's trying to figure out which countries will benefit. An advocacy group praised the decision calling it an "important first step."

...Oh and speaking of vaccines, the EU could welcome fully-vaccinated American tourists this summer. We've got tips on how to make that vax appointment.

Who's taking a closer look...

The Justice Dept. Yesterday, it announced it's investigating the Louisville Metro Police Department's possible pattern of civil rights abuses following Breonna Taylor's death last year. That includes whether officers used excessive force, made unconstitutional stops and served unlawful search warrants, and racially discriminated against residents. Last week, the DOJ announced a similar probe into the Minneapolis PD – a day after former officer Derek Chauvin was found guilty of murdering George Floyd. Now, the DOJ probes could lead to new changes at local police departments. It's unclear when the investigations will wrap up. But the NAACP applauded the DOJ's decision, saying real justice comes with "accountability and action."

The US Census. Yesterday, the Census Bureau released its once-in-a-decade population count. Between 2010 and 2020, America's population grew by 7.4% to about 331.4 million – the second-slowest growth rate in US history. And since the count determines how many seats each state gets in the House, the changes will have analysts (hi, Steve Kornacki) using new election maps. The winners: the South and West, where people are increasingly moving. Everything's now also especially big in Texas, which is getting two new congressional reps. North Carolina, Montana, Oregon, Florida, and Colorado are also each get a plus one. But New York, California, Pennsylvania, Michigan, Illinois, Ohio, and West Virginia each lose a rep. Now it's up to states to carry out the redistricting process in time for the 2022 midterms.

California. Yesterday, state officials said that the push to recall Gov. Gavin Newsom (D-CA) got enough signatures to go to a vote. Newsom's been under fire for the COVID-19 restrictions he's enacted (and broken) in the state. Now, he's on track to face a recall election, which would be the second in California's history. One candidate he'll be up against: Caitlyn Jenner.