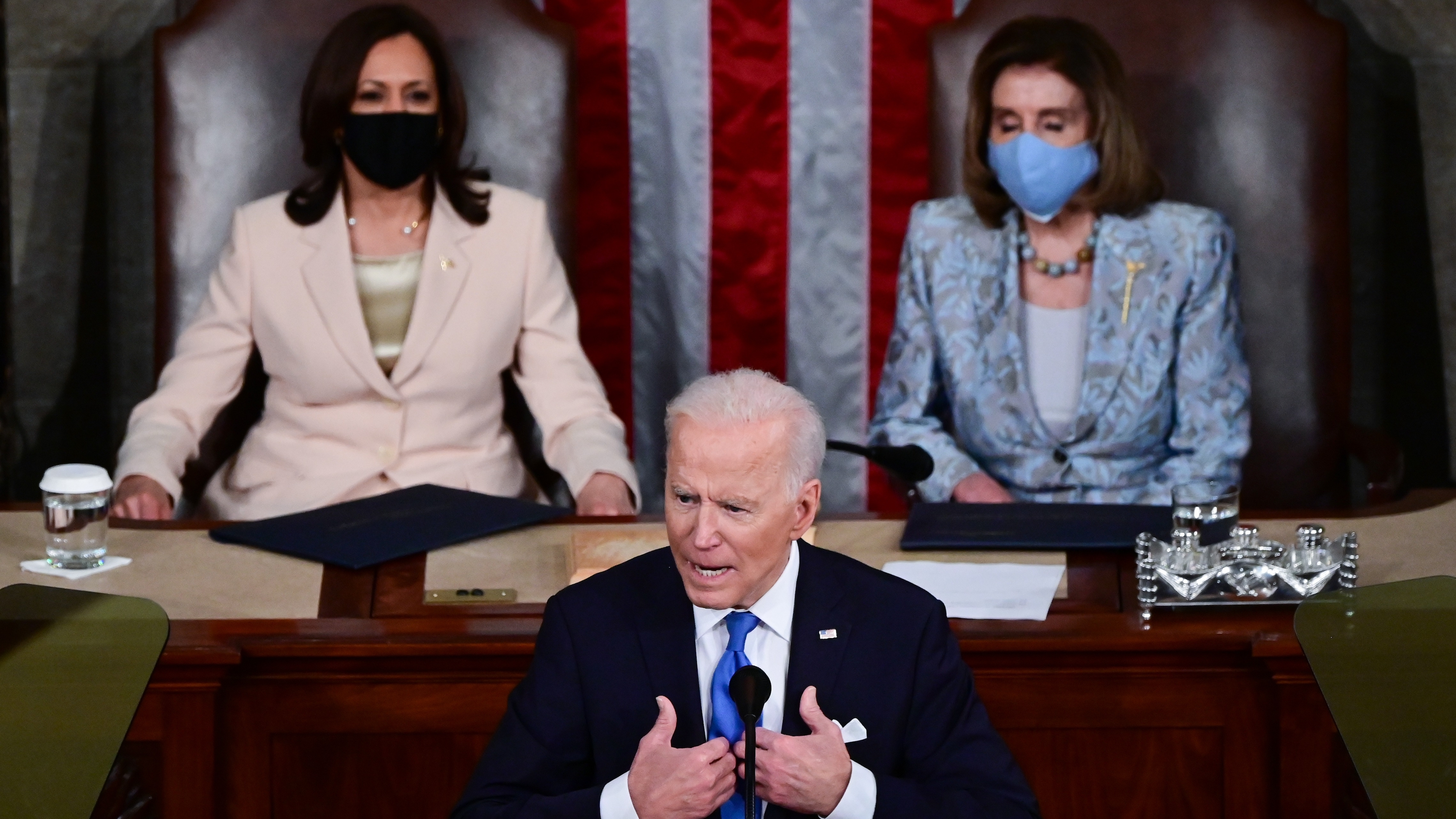 How It Started...How It’s Going

It's tradition for the president to brief Congress on their priorities. But this year, it all looked a little different, because COVID-19. But also because for the first time in history the two people framing the president (the veep and the House speaker) were women. Yesterday, after fist-bumping his way down to the podium, Biden got right to substance. Here's what he had to say about…

COVID-19…as in the virus we all want to put behind us. Biden talked up getting more than 220 million shots into arms in less than 100 days. He pointed out that all Americans age 16 and up are eligible to get vaccinated. And that more than half of US adults have gotten at least one shot. His message: "go get vaccinated, America."

Jobs…as in Biden made the case for his $2 trillion American Jobs Plan. He said focusing on replacing lead pipes in schools and homes, strengthening the country's power grid, and building energy-efficient homes would create millions of jobs all while tackling climate change. He also wants equal pay and a $15/hour minimum wage.

Care...as in Biden has big plans for child care, family care, and health care. Case in point: his $1.8 trillion American Families Plan. It includes a proposal for universal preschool and tuition-free community college. Biden's also pushing for paid family and medical leave, an extension of the child tax credit, and investment in historically Black colleges.

Foreign adversaries...as in he had words for China, calling President Xi Jinping an "autocrat" and saying that wind turbine components should be made "in Pittsburgh instead of Beijing." He also called out Russia for election interference, and Iran and North Korea for their nuclear programs. But he doesn't want the US to continue with the "forever war" in Afghanistan.

Equality…as in he thanked Congress for taking action to protect Asian Americans and Pacific Islanders from hate crimes. But he wants more. Like the Equality Act to protect LGBTQ+ Americans. And for Congress to pass the George Floyd police reform bill by next month.

Guns…as in Biden wants background checks, an assault weapons ban, an end to ghost guns (like untraceable 3D-printed guns), and to get guns out of the hands of abusers. And he says it's time for "Congress to act."

How will he pay for all this?

By raising taxes on the wealthiest Americans. Biden said it's time for corporations and America's 1% to pay "their fair share." And that he'd bump up the capital gains rate on those making over $1 million. But claims he won't raise taxes on Americans making less than $400,000. While the Dems cheered, not everyone bought into Biden's vision.

Sen. Tim Scott (R-SC), the Senate's only Black Republican, delivered the GOP rebuttal. He said our nation is "starving for more than empty platitudes." And he criticized the Biden admin for public school closures and "job-killing" tax hikes. He also discussed his personal experience with racism – and blamed the admin for partisanship and division.

Today marks 100 days since Biden took office. Last night, he laid out an ambitious agenda for the days ahead. But in order to get it done, he'll need support from a divided Congress. Whether it takes up the call remains to be seen.

Psst...Here's where Biden stands on his campaign promises after 100 days in office.

Why environmental and racial justice are interconnected...

This study. Yesterday, researchers revealed that air pollution in the US disproportionately affects Americans of color – regardless of where people live or how much they make. Researchers from five universities found that although the US has made strides to curb air pollution caused by cars, trucks, and construction, people of color have not benefited the same way as white Americans. And that Black Americans, in particular, are exposed to higher averages of polluted air particles (21% more) that account for between 85,000 and 200,000 deaths every year. For comparison, white Americans are exposed to 8% less than the average exposure.

Who won't be forgotten...

Michael Collins. Yesterday, the Apollo 11 astronaut died at age 90 after battling cancer. In 1969, Collins joined Neil Armstrong and Buzz Aldrin in NASA's first moon landing. But Collins never stepped foot on the lunar surface. Instead, he held down the fort (aka command module) and flew the spacecraft solo. He became known as the "forgotten" astronaut partly because he didn't get the press Armstrong and Aldrin did. After the historic trip, Collins went on to launch and oversee the Smithsonian National Air and Space Museum in Washington, DC. NASA remembered him as a "true pioneer." And Aldrin, as the man who helped carry the team to "new heights and to the future." RIP.

Rudy Giuliani. Yesterday, federal agents searched the home and office of former President Trump's personal lawyer. Since 2019, prosecutors have been investigating Giuliani's dealings – on behalf of Trump – in Ukraine. Reminder: Giuliani is under suspicion of breaking lobbying laws in Ukraine while also pushing for then-candidate Joe Biden to be investigated. Giuliani has yet to be charged and has denied any wrongdoing.

Who's singing 'you're gonna have to see through my perspective'...

When you're curious about how vaccines are made…

Check out the Pfizer sausage.