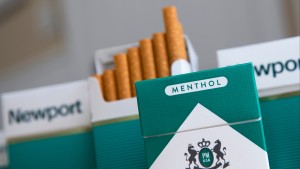 The FDA is working to ban menthol cigarettes.

Smoking cigarettes is the leading cause of preventable death in the US, killing more than 480,000 people per year. While Congress passed a bill banning most flavored cigarettes in 2009, it punted the issue of menthol cigarettes to the FDA. Now, more than 11 years later, the FDA's proposing regulations to ban menthol cigarettes (as well as flavored cigars) from the market. The process could take a year or more to finalize – and tobacco companies will likely challenge it. But the FDA says it's critical to take action because of health equity reasons.

Menthol cigarettes can mask the harshness of smoking with its cooling effects. And tobacco companies market these cigarettes heavily to communities of color: about 85% of Black smokers use them compared to 30% of white smokers. And Black people are more likely to die from tobacco-related illnesses than white people. One study found that removing menthol cigarettes from the market could lead 230,000 Black Americans to quit.

This is an issue the NAACP and medical experts have been ringing the alarm about for years. Now, the FDA is finally taking action that could help save countless lives.

There could be a link between getting tear gassed and having irregular periods.

Last summer, health experts surveyed over 2,200 people who'd been exposed to tear gas at racial justice protests in Portland, Oregon. It came after protesters there and in other cities reported irregular menstrual cycles. Now, the peer-reviewed study – believed to be the first of its kind – is saying that tear gas exposure may have had something to do with it.

The survey found that hundreds of people experienced intense cramping or more bleeding. And that many reportedly required medical attention. The survey suggests tear gas could have lasting health effects. But health experts say other factors like stress and dehydration could play a role too, adding that more research is needed.

While we know some of the short- and long-term health effects of tear gas (like blurred vision, runny nose, and respiratory issues), there isn't much info on how it can impact people's reproductive systems. This study highlights the additional toll tear gas may have on many people. And could be considered in policy decisions involving a chemical weapon that's been banned in warfare for years.

India. The State Dept is telling all Americans to leave the country and avoid traveling there. The announcement comes as India's COVID-19 rates are climbing exponentially, recording more than 300,000 daily cases for at least nine consecutive days. Hospitals and crematoriums are overwhelmed, and oxygen is in short supply. Now, gov officials in India are warning that access to medical care is "becoming severely limited." It comes as governments around the world are stepping in to offer help.

PS: Here are some ideas for how you can help.

The US economy. Yesterday, the Commerce Dept said that GDP grew by a 6.4% annual rate between January and March – bringing the economy closer to what it was before the COVID-19 pandemic started. (For comparison, the economy contracted by an annual pace of 31% between last April and June.) Economists believe the hike is in part because of vaccinations and stimulus checks from the federal gov. But they're warning that vaccine hesitancy could derail economic growth, and that shots in arms are key to the country's recovery.

Psst...Want more money news? Sign up to get our Skimm Money newsletter in your inbox.

Israel. Last night, at least 44 people were killed and over 100 injured in a stampede at a religious festival in the northern part of the country. Tens of thousands of people, mostly ultra-Orthodox Jews, gathered to honor second-century sage Rabbi Shimon Bar Yochai despite warnings to maintain social distancing. It's unclear how exactly the stampede started. But the annual event which includes bonfires, praying, and dancing is believed to be one of the largest in Israel since the start of the pandemic. Prime Minister Benjamin Netanyahu called the incident a "heavy disaster." This is a developing story.

The NFL. Yesterday, the Jacksonville Jaguars chose Clemson QB Trevor Lawrence as the no. 1 pick in this year's draft. But the party's not over yet: draft picks continue through tomorrow.

Who really Can't Believe It…