Daily Skimm: Goodbye to Masks, Israel and Gaza, and "The Proud Family" 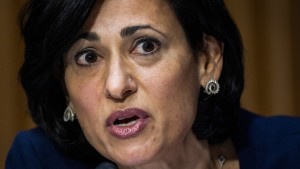 Fully vaccinated people: you can leave the face masks at home.

Yes. But first a refresher: before social distancing and lockdowns, people would often speak face-to-face with one another, sometimes too closely. Breath mints and dental appointments were commonplace. Then, scientists showed that masks can help reduce the spread of COVID-19 by at least 50%. So we suited up. But now, the CDC is saying 'release the mask-en.' And that those who are fully vaccinated can drop their masks in almost every situation.

New data shows that the vaccines are working as well in the real world as they were in clinical trials. So the CDC's saying anyone who's two weeks past their vaccine regimen can go mask-free indoors and outdoors, no social distancing required. But close talkers, beware – it's not free rein everywhere. The CDC still wants masks on planes, buses, and in hospitals, prisons, and homeless shelters.

How will we be able to tell who's vaxxed and who's not?

We won't. This is why the Biden admin is nudging everyone to get jabbed, part of its goal of having 70% of American adults vaccinated by America's birthday. But the new guidance could create confusion, especially since the CDC's changed its guidelines more often than people reapply sunscreen. While it's rare – but still possible – to transmit the virus while vaccinated, the guidance could make those who are more at-risk more uncomfortable. And those with a weakened immune system are being advised to talk to their doctors before dropping the masks.

You're not alone. It's been a struggle for many to open up. And some vaccinated people are holding onto their masks for all sorts of reasons – including a sense of privacy, extra caution, and not wanting to be told to smile. But if you're ready to go maskless, beware: about 3 million masks are being tossed each minute. Disposable face masks, especially, are a problem since they contain plastic microfibers that can further pollute rivers and oceans and affect wildlife. Here are some Mother Earth-approved tips for how to toss masks safely.

We're more than one year into this pandemic. Some of us have been itching to ditch masks. Others are newfound mask-nevernudes. But thanks to vaccines, we now have options. And that's a shot of good news.

PS: Here are all the guidelines for those fully vaccinated against COVID-19.

Where the world is watching…

The Middle East. Yesterday, the Israeli military got ground troops ready along the Gaza border. The latest bout of conflict was triggered by recent Israeli attempts to evict six Palestinian families in the Sheikh Jarrah neighborhood of Jerusalem, as well as clashes at Al-Aqsa Mosque. Since then, Hamas and other Palestinian militant groups have launched about 1,800 rockets at Israel while Israel has responded with more than 600 airstrikes. At least 119 Palestinians have been killed, including 31 children. Israel's missile defense system has intercepted most of the rockets, but some have reached population centers. At least seven people have been killed in Israel, including two children. The international community has urged restraint. Israeli PM Benjamin Netanyahu reportedly said the operation will continue "as long as it takes to restore peace and security."

Elon Musk. Earlier this week, the Tesla CEO said it will no longer be accepting bitcoin because of concerns over "fossil fuels." Turns out, "mining" the digital currency requires powerful computers to use large amounts of energy. And often those computers are powered by coal – raising concerns about the crypto's carbon footprint. One study found bitcoin mining used about as much energy as the Netherlands in 2019. The news sent bitcoin's stock price tumbling. But there's a new doge in this fight. Yesterday, Musk said he's working with the makers of Dogecoin to improve their "transaction efficiency." Someone grab a treat.

Psst…if you still feel lost when it comes to crypto, we answered some FAQs here.

Where checks could get smaller…

Georgia. Yesterday, it said it's cutting the $300 weekly federal unemployment bonus made available during the pandemic. At least 15 other states have decided to do the same. Meaning, nearly 2 million Americans could be seeing smaller unemployment paychecks as early as next month. State leaders are citing a labor shortage for the change. Some Americans have found unemployment checks can pay more than minimum wage jobs. Now state govs want to put an end to that bonus, hoping it'll drive people back to work and help boost the economy.

When you're not in the mood for a boOZY weekend...

Check out OZY Fest. Headliners include H.E.R., Dr. Anthony Fauci, Tig Notaro, and Matt James (yes, that Matt James). The best part: you can stream it live all weekend.