Daily Skimm: The Lab Theory's Back, San Jose, and the "Friends" Reunion 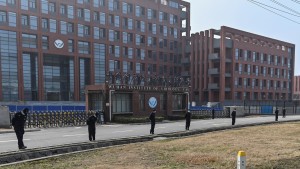 President Biden wants to get to the bottom of COVID-19.

The first COVID-19 cases were reported in late 2019 in Wuhan, China. As with other coronaviruses (like MERS), many experts thought it probably jumped naturally from animal to human. But scientists haven't been able to confirm the virus came from an animal. And the Wuhan lab – which has raised safety concerns in the past – also happens to deal with the world's most dangerous pathogens. Enter, the theory that the virus could have escaped from the lab. Former President Trump got flak for pushing that theory alongside anti-Chinese rhetoric. And earlier this year, the World Health Organization – which has run up against barriers from China in its investigation – concluded the lab theory was "extremely unlikely." Now, White House officials have suddenly started saying 'actually, let's look further into this.'

Why the change in tone?

This week, news broke that three researchers from China's Wuhan Institute of Virology were hospitalized in Nov 2019 with coronavirus-like symptoms. The info, uncovered by The Wall Street Journal, was found in a previously undisclosed US intel report. China has repeatedly denied allegations that the virus came from a lab and called the latest report "completely untrue." But scientists and govs from around the world want a more in-depth investigation, saying that the lab theories "were not given balanced consideration." Dr. Anthony Fauci, who dismissed the theory last year, also now says he's "not convinced" the virus developed naturally. And is facing questions on his institute's role in funding the lab. Now, Biden's giving the US intel community 90 days to provide a report digging into the virus's origin.

Can't wait to read it.

Well it's unclear what they'll uncover. The US intel community has been looking for answers for over a year. The CDC and State Dept have also been digging into it...although the Biden admin reportedly quashed the State Dept's investigation over concerns that it had gotten political. Now, the focus is on what US intel can deliver. Meanwhile, some Republicans are feeling vindicated. Sen. Tom Cotton (R-AR) slammed reporters and "activists in white lab coats" for dismissing the theory. And Trump said 'I told you so.' We may never find out how the virus broke out – but it's important: the answers could help prevent future pandemics. Meanwhile, as the US continues to see a spike in anti-Asian hate crimes amid the pandemic, some fear this latest report could boil over onto the Asian community.

We still don't know how the virus that's killed more than 3 million people first reached humans. But the national conversation has now shifted from 'case closed' to 'case very much open.' And those who've been dismissed as conspiracy theorists are counting that as a victory.

California. Yesterday, a gunman opened fire at a VTA rail yard in San Jose, killing at least nine people. The shooter, who died by suicide, was an employee of the Santa Clara Valley Transportation Agency. Officials are still investigating a motive, but the shooter had also started a fire at his house – where investigators reportedly found large amounts of ammo. San Jose's mayor called it a "horrific day." And the VTA said "our thoughts and love goes out to the VTA family." It marks the latest bout of gun violence in the US after at least 194 mass shootings just this year, according to one analysis. And after states like Texas have eased gun control with new legislation. Gov. Gavin Newsom (D) condemned America's "rinse and repeat" cycle of mass shootings. In an emotional speech, he asked, "what the hell is wrong with us?"

PS: Traumatic events, like mass shootings, impact everyone differently. Here are some ways to cope.

ExxonMobil. Yesterday, shareholders ousted at least two directors from the oil giant's board. It came after activist hedge fund Engine No. 1 called on Exxon to better address climate change. And develop a strategy for a low-carbon future. Now, with the support of other shareholders, the firm said 'time's up.' And replaced two of the board members with their own picks to get the company to greener pastures. This could send a message to other fossil fuel companies that have remained stagnant. But Exxon's defended how it handled its fossil fuel strategy, and pointed to its investment in carbon capture and storage.

Shell. Yesterday, a Dutch court ruled that the oil company must cut down its carbon emissions by nearly half by 2030. But Shell's goal was less than half of that – a 20% decrease by the same year. It's believed to be the first time a court has ordered a company to reduce emissions to meet global climate goals. And comes as more and more oil and gas companies are under pressure to cut their CO2 emissions. Climate activists called the decision a turning point. But Shell plans to appeal.

Eric Carle. Earlier this week, the author and artist for "The Very Hungry Caterpillar" died at age 91 from kidney failure. The book has sold more than 50 million copies and has been translated into dozens of languages. In a tribute, Carle's family said "a painter of rainbows is now traveling across the night sky." RIP.

Amazon. Yesterday, it signed a megadeal (over $8 billion) and acquired MGM. What it means: more movies and shows on Prime Video. Alexa, play "Legally Blonde."

What's making us fall in Louvre...