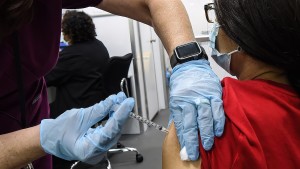 Americans may be as confused about COVID-19 as last year.

It's the back and forth for me.

We get it. Since the pandemic began, COVID-19 cases have gone up, down, and all around. So have restrictions and guidelines – pushing people to hit 'refresh' on the CDC website about as much as they check their Facebooks. While many got to enjoy the first few months post-vaccine, Dr. Anthony Fauci now says the US is "going in the wrong direction." It comes amid more contagious COVID-19 variants. Especially delta, which is in over 100 countries and the dominant strain in the US. Here's where things stand on three major COVID-19 topics:

Mask up or mask down?...For a while now, we've been told fully vaxxed people can ditch the mask. Many businesses and restaurants updated their signs. So did local govs. And some schools are expected to in the fall. But with delta on the rise, the debate is back on. Health officials are apparently discussing whether to edit mask guidelines for vaxxed people, saying it's "under active consideration." And some places have already brought them back for everyone.

Vax stats...About half of the US population is fully vaxxed but many are still vaccine hesitant. This, despite vaccines showing high effectiveness at preventing hospitalization. (Think: over 99% of those who died of COVID-19 last month were unvaccinated.) But things get tricky when it comes to variants. A recent UK study showed Pfizer's two-dose shot is 88% effective at preventing symptomatic disease from delta. Meanwhile, a small dataset from Israel reportedly found that figure was closer to 40%. While the data is still muddy, Fauci says booster shots "might likely happen" for some people (think: those who are immunocompromised) to give them extra protection.

The breakthrough cases…Aka when a fully vaxxed person tests positive for COVID-19. There were apparently over 10,000 of these cases in the US as of April. But the CDC has since stopped tracking all of them – instead focusing on those that cause hospitalization or death. Still, headlines about vaccinated MLB members, Texas politicians, and White House officials testing positive have people stressing. Here's the bottom line: vaccines aren't foolproof. But they strongly protect against severe disease. And may help limit new variants from forming and new infections from spreading.

We're still in a pandemic and coronavirus cases are rising in every state. And while some are living it up, it may soon be time to go back to basics. That could include masks and social distancing as the US and the world continue to deal with COVID-19 and its variants.

Tunisia. Yesterday, President Kais Saied fired the PM and froze parliament for 30 days. It comes after thousands of Tunisians turned out Sunday, on the anniversary of the country's independence. Calling for parliament to be dissolved. Protesters expressed anger over Tunisia's economic crisis and gov mishandling of the pandemic. Think: long lines for vaccine access amid a weeks-long COVID-19 spike. Meanwhile, unemployment is surging, with young people especially struggling to find work. The government is trying to negotiate a loan with the International Monetary Fund. But that could involve even more belt-tightening. Now, after clashes between protesters and police, Saied's taking charge with the help of a new PM that's TBD "until social peace returns." His opponents are calling the move a coup. And the young democracy – the birthplace of the Arab Spring uprisings over 10 years ago – is experiencing some serious pressure testing.

Who's getting welcome packets…

Reps Liz Cheney (R-WY) and Adam Kinzinger (R-IL). The lawmakers are the only two Republicans on the new Jan 6 select committee – the House panel looking into what led to the Capitol attack. Last week, House Minority Leader Kevin McCarthy (R-CA) pulled all five of his Republican nominees for the committee. It came after House Speaker Nancy Pelosi (D-CA) rejected two allies of former President Trump. Now, Pelosi's reached across the aisle, convincing Cheney and Kinzinger – both of whom are Trump critics – to join the revised nine-person panel. And said the committee must not have "partisanship." But McCarthy said Pelosi only picked people who would stick to her "preconceived narrative."

Where people are trying to get some bling...

The Tokyo Olympics. On Friday, the 2020 games kicked off. Day one ended with no medals for Team USA (a first since 1972). The US men's basketball team said 'au revoir' to its years-long winning streak, after losing to (you guessed it) France. Russia flipped its way to the top of the women's gymnastics qualifiers after USA's flips flopped. But swimmer Chase Kalisz came in clutch, giving 'Murica its first gold medal on day two. Five-time Olympic gold medalist Katie Ledecky freestyled to a silver medal. And Caeleb Dressel pooled together a victory. 18-year-old Anastasija Zolotic became the first American woman to win gold in women's taekwondo. Now, the U-S-of-A is second (after China) in total medal count. But don't sweat it, there's still about two weeks left in the games.

...Oh and speaking of medals, Steve Kornacki's apparently already taking the gold for his breakdown on how to watch the Olympic events.