Daily Skimm: Iraq, COVID-19 Vaccines, and Women at the Olympics 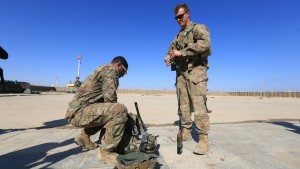 The US is changing up its strategy in Iraq.

In 2003, then-President George W Bush declared war on Iraq. And ordered US forces to remove Iraqi dictator Saddam Hussein from power – under the premise that his gov had weapons of mass destruction (WMDs). US forces eventually captured Hussein. He was charged with crimes against humanity, sentenced to death, and executed. WMDs were never found. And in 2011, then-President Obama announced the withdrawal of all US troops by the end of the year. But things changed in 2014 – when more troops were deployed. This time to fight against ISIS. With the US's help, Iraq declared victory against ISIS in 2017 – although an estimated 10,000 ISIS fighters are still operating in the region. Now, things may be changing again.

Right now, there are about 2,500 US service members with boots on the ground in Iraq. But yesterday, President Biden and Iraqi Prime Minister Mustafa al-Kadhimi officially shook on ending the US's combat mission by the end of the year. Meaning, the mission's shifting to an "advisory and training" one – where troops will help Iraqi forces "deal with ISIS." Al-Kadhimi has said there's "no need for any foreign combat forces" in Iraq. For a while now, he'd been facing mounting pressure from political parties to get Americans out. And attacks from Iranian-backed militias have only added pressure on the gov. The announcement comes ahead of parliamentary elections in October.

The agreement is largely symbolic. And Biden hasn't confirmed whether any of the troops will get to come home. But the hope is that it could ease tensions, which had flared back up last year after the US killing of Qasem Soleimani – the Iranian commander who worked with Iraqi Shiite militias and had been accused of planning attacks on US officials. Biden says the US will continue to maintain a relationship with Iraq, including their "counterterrorism cooperation." And promised to provide humanitarian aid, including 500,000 coronavirus vaccine doses and $5.2 million for the UN to oversee elections in Iraq.

Millions of Americans have only known the US to be at war with Afghanistan and Iraq. Now, nearly two decades later, the US's presence in both countries could change within a year.

The Dept of Veterans Affairs. Yesterday, it became the first fed agency to require its health care workers to get vaccinated against COVID-19. The Biden admin's left it up to companies and states to decide whether to issue a vax mandate. But with delta on the rise, and a vax rate that's going nowhere fast, the VA's not taking any chances. Especially since four unvaccinated employees recently died of COVID-19 (three of whom were infected with the delta variant). Now, the agency's saying that having health care employees roll up their sleeves is the "best way to keep Veterans safe." And about 115,000 workers will have to get jabbed within two months.

California. Yesterday, Gov. Gavin Newsom (D) announced that all state employees and health care workers must show proof of vaccination or take weekly COVID-19 tests. The new rule will go into effect next month. About 62% of Californians are fully vaxxed, but Newsom is looking to make sure its estimated 246,000 state employees are too. CA is experiencing rising infections and hospitalizations. And roughly 80% of cases are from the delta variant. Now, Newsom – who's facing a recall election, mainly over his response to the pandemic – is taking action. And telling those who choose to say 'no' to the vaccine that their decisions are affecting Californians in a "devastating and deadly way."

...Oh and speaking of vaccines, NYC Mayor Bill de Blasio (D) is requiring all city workers to get jabbed by September or get tested weekly.

What else has people talking about COVID-19…

Disability resources. Yesterday, the Biden admin said "long COVID" may qualify as a disability. COVID-19 long-haulers are people who still experience symptoms (think: fatigue, shortness of breath, coughing) months after diagnosis. Researchers estimate between 10% and 30% of patients suffer from long-lasting symptoms. Now, on the 31st anniversary of the Americans with Disabilities Act, the Biden admin says those experiencing symptoms that "substantially limits one or more major life activities" can get disability protections – including protection from discrimination under federal disability laws.

The housing market. Yesterday, the Commerce Dept said that new single-family home sales last month dropped to the lowest level since April 2020. Why? Pricey lumber and other high production costs have hindered construction workers' use of their tool belts – limiting the number of new homes with "For Sale" signs.

While some women are making waves at the Olympics...

Others are landing tricks.