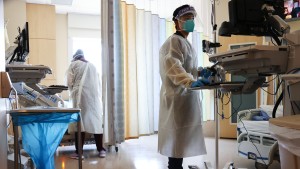 Not Just Another Variant

The delta variant is raising new fears…and could be throwing family gatherings, weddings, and travel plans into question.

How in the world are we still here?

Delta. The variant was first identified in India back in December 2020. It spread around the world, and has become the dominant strain in the US and most of Europe. Delta has the CDC rolling back recs on masks. And it now says the variant is as contagious as chickenpox. Here's what you should know if you're…

Vaccinated: That's about half of the country's total population (over 57% are partially protected). The jabs overwhelmingly prevent severe illness, hospitalizations, and death – including for the delta variant. But those who do get a breakthrough infection may spread delta as easily as unvaxxed people. And one study found that among breakthrough cases, about 19% experienced long-haul symptoms. What you can do if you're worried about being contagious: mask up, meet outdoors, and social distance. Btw, at-home rapid tests are a thing.

Unvaccinated: That's reportedly 100 million eligible people in the US. Stats against the virus aren't in their favor. People who haven't rolled up their sleeves made up over 97% of new hospitalizations, and over 99% of COVID-related deaths in June. Over two-thirds of all US counties have high or substantial transmission. And all 50 states have seen a rise. In Alabama, which has the highest positivity rate in the country, one doctor told of patients reportedly begging for a vaccine – but being told it's too late. Others have similar stories in Miami. If you haven't gotten vaccinated, here's where to go.

The latest data on delta isn't good. And breakthrough cases happen. But experts say vaccines are some of the best tools we have in preventing the worst this virus can wreak: hospitalizations and death. Stay safe.

Where plans are changing...

Myanmar. Yesterday, its military leader Gen. Min Aung Hlaing said 'hi, I'm prime minister now.' And extended the country's state of emergency until 2023 (up from 2022). In February, the military arrested civilian leader Aung San Suu Kyi, declared a state of emergency, and took over the gov. The military said this was all in response to alleged election fraud. But the move sparked protests. And by one count, security forces have killed at least 940 people. Now, Min Aung Hlaing's saying the country needs to "create conditions" in order to hold the general election. But critics are saying 'promises, schpromises' and reportedly that they won't stop protesting until democracy returns. The US Embassy in Myanmar said it'll continue to support protesters' "aspirations for a democratic, inclusive future."

The Biden admin. On Friday, it restarted fast-track deportations of migrants, reportedly sending 73 people to their home countries of Guatemala, El Salvador, and Honduras. Fast-track deportations expel migrants without giving them a hearing before an immigration judge. And are allowed under Title 42 – an emergency public health order. But the Biden admin has not used the law to deport minors. And has told migrants traveling to the southern border to "not come." The Biden admin's cracking down amid concerns about the delta variant's spread. And amid a 21-year high number of apprehensions (over 188,000) at the southern border in the month of June alone. Advocates say Title 42 denies migrant's legal right to due process. But DHS says it helps "securely manage our border."

Where people are seeing gold…

The Tokyo Olympics. The US holds the most number of medals: 61. That includes 21 gold medals, second to China (which has 28). Over the weekend, we met the fastest woman and man in the world. And two athletic rivals-turned-friends decided to share the gold medal in the men's high jump rather than carry on with a jump-off. Meanwhile, Katie Ledecky swam to the top with six individual gold medals – the most of any female swimmer. Fin.

...Oh and, speaking of Olympians, tomorrow, Simone Biles will compete in the balance beam final. It's her last opportunity to perform after withdrawing from other events last week to prioritize her mental health.

While Bennifer couldn't get Better-fer…