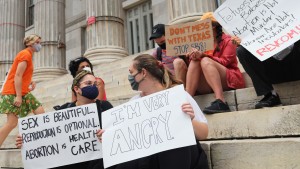 It’s time for a temperature check.

Is this COVID-19 related?

Not this time. We’re talking about the state of the country. It’s been a disastrous week for women’s rights and abortion rights. Anti-abortion advocates are calling Texas’s abortion ban a ‘victory.’ But many may be feeling hopeless, defeated, or even angry. Others, terrified of what’s to come. Amid growing concerns for Roe v Wade, some lawmakers are scrambling to get sh*t done to combat Texas’s controversial law, and in turn fight for women’s rights. Here’s what could be at play…

Oversight: Promising a "whole-of-government effort," President Biden directed his Gender Policy Council and the White House legal team to figure out how the gov can protect women in Texas and their constitutional right to abortion. That includes departments like the DOJ, which is already “evaluating all options.” The White House is also calling on Congress to step in and pass...

Legislation: House Speaker Nancy Pelosi (D-CA) said lawmakers will take up the Women’s Health Protection Act when they return to session on Sept 20. The bill would establish the legal right to abortion in the US (read: codify Roe v Wade). It also blocks states from putting medically unnecessary restrictions in place. It’s not likely the Senate – which is split 50-50 – will be on board. Which brings us to…

Abolishing the filibuster: Some Democratic lawmakers are calling for an end to the old practice, claiming it allows Republicans to essentially sideline any bill they don’t agree with. Despite the fact that Dems control both chambers of Congress, several bills have been derailed because of the filibuster (think: voting rights bill, Jan 6 commission). But it won’t be easy to get it over the Hill. Some lawmakers think the filibuster should be reformed instead.

Packing the court: Aka adding justices to the Supreme Court. Currently, the bench is solidly conservative (6-3) and has been that way since former President Trump appointed three justices during his term. Now, some are calling on Congress to change the number of justices (which has happened seven times in US history), saying it could create a more balanced bench. In April, progressive House Dems intro’d a bill to do just that. But it didn’t get very far. And Biden started a commission to look into it.

Is that going to work?

No one knows...yet. Other red states (like Florida and Arkansas) are eyeing Texas’s ban, hoping to enact similar restrictions. This year alone, more than 561 abortion restrictions were intro’d across the country – 97 have already been enacted. But many women are saying 'we won't stand for this.' A Women’s March is planned in every single state for October 2, days before SCOTUS’s next term begins (and when they’re set to take up another challenge to Roe v Wade). If you're looking for other ways to make your voice heard, here's how to contact your elected officials.

For years, a woman's constitutional right to choose has faced a number of threats. Now, the battle has reached a major inflection point. And it could leave many women’s lives in the hands of a divided Supreme Court and Congress.

What has people reeling…

Ida’s remnants. This week, the storm battered the Mid-Atlantic and Northeast – leaving at least 46 people dead. On its way north, Ida kept its rainy core and merged with a regular storm, bringing record rainfall that flooded cities, towns, and the NYC subway system. Tornadoes also hit the region. Now, several states are dealing with cleanup efforts after rescues continued yesterday. The severe weather and damage comes as hundreds of thousands of people in Louisiana are still without power after Hurricane Ida hit earlier this week.

The Taliban. It's expected to announce its new government in Afghanistan soon – almost three weeks after it took control of the country. Earlier this week, the US ended its 20 years of war there, leaving a huge question mark over the country’s future and how the Taliban would rule. They're expected to name Haibatullah Akhundzada as supreme leader – reportedly giving him ultimate power over the new governing council and president (similar to the role of Iran's supreme leader). But it’s not clear if Akhundzada or the new gov will get a warm welcome from the rest of the world.

The CDC. Earlier this week, the agency warned unvaccinated Americans (roughly 85 million people) against traveling over Labor Day weekend. It comes as the delta variant continues to spread. And as the World Health Organization is on alert over a new variant: mu. Across the US, the average number of new daily cases has topped 160,000. And one analysis has found that daily deaths have more than quadrupled since August. Now, experts worry that travel over the long weekend could worsen the state of the pandemic.

PS: If you're planning a little get-together for LDW, an etiquette expert gave us tips on how to ask your guests if they're vaccinated.

China. Earlier this week, the country banned gamers under 18 from playing online video games on school days. And will only give them a three-hour limit on Fridays, weekends, and public holidays. Gamers will have to officially register with gaming companies so they can monitor them. Play time's over, kids.

What you're ABBA-t to dance to all weekend…