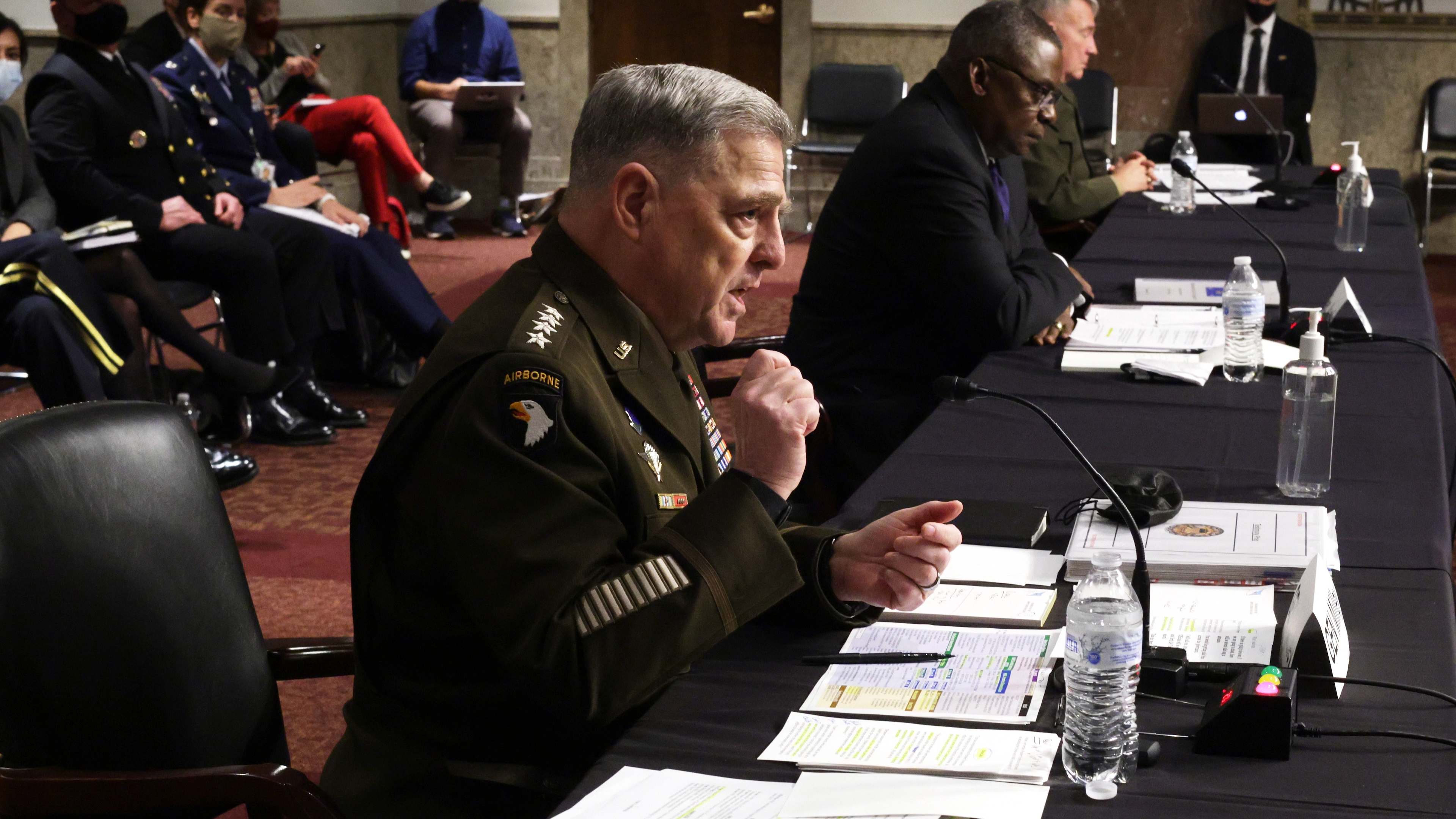 The US’s top military leaders are taking the mic.

Afghanistan. A month ago, the US ended its nearly 20-year war there amid a chaotic withdrawal of over 120,000 people – including about 6,000 American citizens. But the Biden admin’s evac prompted widespread condemnation from people across the aisle – and the world. The deaths of 13 US service members and at least 169 civilians only added to the public rebuke. As did the US drone strike that accidentally killed 10 Afghans. Lawmakers called for an investigation. Now, the top military officials who helped call the shots in Afghanistan are giving As to lawmakers’ Qs.

Yesterday, the Senate Armed Services Committee grilled them about President Biden’s decisions. Head of Central Command Gen. Frank McKenzie testified that he advised Biden not to fully withdraw. And rec’d that 2,500 troops stay in Afghanistan. This contradicts Biden's earlier comments that “no one” advised him to keep troops there. Gen. Mark Milley, chairman of the Joint Chiefs of Staff, called the whole evacuation plan a “strategic failure.” And Defense Sec Lloyd Austin said the Taliban takeover took the US “by surprise.” Meanwhile, the White House is saying Biden took into account “a range of viewpoints” when he pulled troops out of the country. And that as the commander-in-chief, he gets the final say.

Officials say they’re monitoring any signs of ISIS and al-Qaeda rebuilding in Afghanistan. And that they’re working to evacuate some 100 Americans still in the country. All three officials are scheduled to testify again today before a House committee. In the meantime, women’s rights in Afghanistan continue to deteriorate. Over 220 female Afghan judges are in hiding, fearing they could be targets of the Taliban. Female students have been barred from returning to their studies at Kabul University. Others are being segregated from their male peers. And Afghanistan’s financial system is on the verge of collapse.

America’s longest war didn’t end in a US victory or an organized exit. Now, lawmakers are holding top military officials accountable for actions that killed innocent people and have reversed over a decade of progress in Afghanistan.

This report. Yesterday, an independent commission said that WHO aid workers sexually abused women and girls while working in the Democratic Republic of Congo. Between 2018 and 2020, workers helped respond to the Ebola outbreak there. An investigation came after reports in which more than 50 women accused aid workers of abuse. Now, the new report identified 83 alleged perpetrators – including 21 employed by the WHO – who exploited women and girls as young as 13. And that they impregnated 29 women, forcing some to have abortions. Some women were also allegedly promised jobs for sexual favors. Now, several abusers have been fired. And the WHO's director-general apologized to the victims, calling it “inexcusable” and promised to hold the perpetrators accountable.

Novant Health. Earlier this week, the North Carolina-based hospital system said it fired about 175 employees who refused to comply with its vaccine mandate. In July, it said it'll require COVID-19 vaccinations for its employees and gave a Sept 15 deadline to get the shot. Or, risk getting fired. More than 99% of roughly 35,000 employees decided to get inoculated. But dozens of others refused to roll up their sleeves, leading to one of the largest mass firings of unvaxxed hospital staff to date.

...Oh, and New York's vaccine mandate for health care workers went into effect this week. And Gov. Kathy Hochul (D) is prepared for anything.

What Gen Alpha is likely not looking forward to…

Psst…we Skimm’d how climate change can impact your money and health.

While Netflix is getting into games...

Amazon is getting into robots.