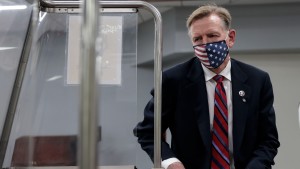 Bear with us. Last week, Rep. Paul Gosar (R-AZ) posted an animated video on social media of him killing progressive Rep. Alexandria Ocasio-Cortez (D-NY) and assaulting President Biden. The clip includes visuals from popular Japanese anime, “Attack on Titan.” The move sparked outrage on the Hill (and beyond). Yesterday, the House voted 223 to 207 to censure Gosar. And booted him from two committee assignments – affecting his ability to shape legislation. It’s the harshest punishment a House member can receive other than being fully expelled.

Democrats teamed up in a public rebuke of Gosar’s actions. Think: that “Shame” scene in “Game of Thrones.” It’s the first time the House has censured someone in over a decade. In 2010, members of both parties teamed up to censure Rep. Charlie Rangel (D-NY) for ethics violations. Earlier this year, Reps. Ilhan Omar (D-MN) and Marjorie Taylor Greene (R-GA) faced threats of being censured because of comments perceived to be anti-Semitic. Now, Gosar’s censure is ringing the bell on workplace harassment – and not even those in Congress are immune.

Last year, then-Rep. Ted Yoho (R-FL) called AOC a "f***ing b*tch." And Rep. Liz Cheney (R-WY) faced death threats for voting to impeach then-President Trump. House Speaker Nancy Pelosi (D-CA) said threats against women are the equivalent of “workplace harassment.” And the lower chamber’s resolution noted it as a “global phenomenon” meant to silence women from seeking political office. As for Gosar, he called the video a “symbolic cartoon.” And has yet to apologize. Meanwhile, House Republicans are warning of retaliation should they take back the chamber in the midterms.

Congress is a workplace. Threats of violence, abuse, and harassment toward other members only add to strained political tensions. And keep those elected to represent their constituents from doing their job.

Drug overdose deaths. Yesterday, the CDC said over 100,000 people in the US died of drug overdoses during a 12-month span. The new record is more than the toll from car accidents and gun deaths...combined. Over the years, synthetic opioids like fentanyl – which can be 100 times more potent than morphine – have helped fuel the opioid epidemic. Now, health experts say the pandemic has exacerbated the crisis – with isolation partly to blame. And with drug overdose deaths increasing by 30%, the Biden admin is getting involved.

Who’s got an update…

US Catholic bishops. Yesterday, they approved a statement on Communion for the first time in 15 years. The sacrament is when Catholics go up to the altar during Mass to receive the body of Christ (a wafer) and the blood of Christ (wine). It's one of the most sacred rituals in Christianity. Earlier this year, the US Conference of Catholic Bishops (USCCB) voted to draft guidance that could limit the sacrament for those whose views don't align with church teachings. Including, Catholic politicians who publicly support abortion rights (like President Biden). Now, the USCCB’s leaving it up to individual bishops to make the call.

Peng Shuai. Earlier this month, the Chinese tennis star publicly accused a former top gov official of sexual assault. It’s the first time anyone’s made such an allegation against a member of the Chinese Communist Party. But Peng hasn’t been heard from since her post on social media. And the Women’s Tennis Association (WTA) has not been able to reach her. Now, a lot of people – including fellow tennis star Naomi Osaka – are asking ‘where’s Peng?’ Chinese state media shared an email in which Peng allegedly said she is “not missing” and backpedals on her sexual assault allegations. But the WTA chairman says he’s not buying it.

Young Dolph. Yesterday, the rapper was shot and killed in Memphis, TN. He was 36. Dolph, whose real name was Adolph Robert Thornton, Jr, was known for albums including "King of Memphis" and "Rich Slave." Officials said Dolph was at a cookie shop when someone reportedly drove up and shot him through a window. And called it "another example of the senseless gun violence" in the country. The rapper's talent agency remembered him as an "icon" and "beloved artist" who will be missed.

Who’s not dancing on tables…

Quentin Tarantino. Earlier this week, Hollywood studio Miramax sued the “Pulp Fiction” director for copyright infringement. The studio had learned that Tarantino wanted to sell NFTs based on the 1994 cult classic. But Miramax says he handed over the rights for the film years ago. (Talk about ‘Pulp Friction.’) It comes amid a broader question of who owns the rights to sell NFTs – a market generating billions in sales.

PS: We've got more about NFTs and other trendy investments (hey, crypto and meme stocks) here.

Who’s saying this is ‘one long overdue leap for mankind’...