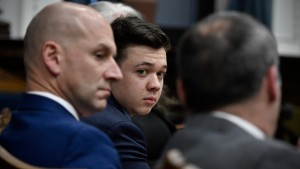 And Justice For All?

America’s justice system is under a microscope.

On Friday, a jury in Kenosha, WI, acquitted Kyle Rittenhouse of all five charges – including homicide. Last year, the then-17-year-old killed two men and injured a third at a BLM protest – sparked by the police shooting of Jacob Blake. Rittenhouse, who had traveled across state lines, was armed with an AR-15-style rifle at the protest. And said his goal was to protect businesses and provide medical aid. For two weeks, the defense argued Rittenhouse acted in self-defense. And the prosecution refuted this, saying Rittenhouse provoked violence and was an “active shooter.” After roughly 26 hours of deliberation, a jury unanimously decided to let Rittenhouse walk free. Now, many are saying there are two different justice systems: one for white Americans and the other for Black Americans.

Footage shows police handing Rittenhouse water and thanking him for being in Kenosha. Meanwhile, a video showed Blake walking away from the police when an officer shot him seven times in the back, leaving him paralyzed. The officer who shot Blake isn't facing charges. Now, activists are pointing to previous cases that have left Black Americans without justice for much less than homicide. There are those like Grace, who was detained for not doing her homework. And Fair Wayne Bryant, who was sentenced to life in prison for stealing hedge clippers. But it's not just certain cases, studies have shown that Black men receive sentences that are – on average – about 20% longer than white men...for the same crime. And are also disproportionately stopped, arrested, and killed by police. But while the Rittenhouse trial has many calling out systemic racism, legal experts say the jury had a very specific task.

To determine whether Rittenhouse acted in self-defense. The burden fell on prosecutors to disprove beyond a “reasonable doubt” that he was. That’s not an easy task. Especially since the judge – who was accused of bias – has a history of banning the word "victim" in his courtroom. Meaning, the prosecution couldn't refer to those killed by Rittenhouse as "victims." And since Rittenhouse testified that he had no choice but to fire his weapon after being “attacked” by a mob. Most states apparently don’t allow a self-defense claim if the defendant was the “initial aggressor.” Ultimately, the jury decided that Rittenhouse didn't provoke the shooting.

Republicans like Wisconsin Sen. Ron Johnson said that “justice has been served.” President Biden said the “jury system works," even if it leaves “many Americans feeling angry and concerned,” including himself. Others, like Jacob Blake’s father, said the verdict could empower individuals to openly carry weapons and shoot others. It’s a message California Gov. Gavin Newsom (D) echoed, saying the verdict sends a message that people can “carry around weapons built for a military, shoot and kill people, and get away with it.” The family of Anthony Huber – one of the men killed – said the jury’s decision left them “heartbroken and angry.” And activists promise they'll continue to fight for change in the policing and justice systems. Meanwhile, Rittenhouse could face civil lawsuits.

Criminal trials like those of Rittenhouse have gained national attention – putting America’s divisions on race and gun rights on display. But all too often, the verdicts leave many doubting that the justice system is created equal and brings justice for all.

PS: Conversations about race and politics can be difficult to handle with family. We’ve got tips on how to navigate them this holiday season here.

Why else Wisconsin is in the news…

Another violent tragedy. Yesterday, an SUV sped through a Christmas parade in Waukesha, WI, and injured more than 40 people – including 12 minors. At least five people have died, and officials say the death toll could rise. And that they have a “person of interest” in custody. But the motive – including whether it was a terrorist attack – is TBD. Police and the FBI are now investigating.

Where things are finally progressing…

Congress. On Friday, the House passed President Biden’s roughly $2 trillion social and climate spending package. It came after House Minority Leader Kevin McCarthy (R-CA) delayed the vote by speaking for eight hours and 32 minutes (a new House record). It eventually passed 220 to 213 largely along party lines. Now, the bill heads to the Senate where some rewrites (and some pushback on the sticker price) are expected. The price tag would allow for $550 billion to fight climate change. Free pre-K for 3- and 4-year-old kids. And for...drumroll please...

Europe. Over the weekend, a number of protests across the continent popped up over vaccine mandates, vax passports, and lockdowns. Think: Austria, Belgium, the Netherlands, Croatia, Northern Ireland, and Italy. Europe is back at the epicenter of COVID-19 as many countries have been reporting record numbers of infections. Vaccine hesitancy’s partly to blame. So, gov leaders are implementing new-ish measures like lockdowns and vaccine passports. And folks are not happy. In the Netherlands, riots broke out and dozens have been arrested. And in Austria, an estimated ​​40,000 people (including far-right groups) took to the streets in Vienna. It comes after the gov there announced plans for a nationwide vax mandate – it would be the first European country to do so.

...Oh and speaking of the pandemic, the CDC has approved COVID-19 boosters for all adults in the US.

Peng Shuai. Yesterday, the International Olympic Committee spoke with the tennis star who had been MIA for weeks after she publicly accused a former Chinese official of sexual assault. The Chinese athlete's disappearance had people posting #WhereIsPengShuai – including Naomi Osaka and Serena Williams. Now, the IOC says Peng is “safe and well” and wants privacy. But it has others – including the UN – demanding an investigation into the sexual assault allegation.

When does El Salvador plan to build a new city…

Who had a smooth weekend...