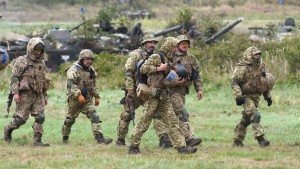 Putin It Out There

Russia may have 'invade Ukraine' as a New Year's resolution.

Is that a joke?

Unfortunately, no. Tensions between the two have been building for years. In 2014, Russia annexed the Ukrainian peninsula of Crimea. Since then, Russian President Vladimir Putin has been trying to tighten his grip on the former Soviet country – offering Russian citizenship to Ukrainians, building up a military presence along the border, and warning NATO to stay back. Now, new US intel says Putin’s planning to ring in the new year by invading the whole country.

Not quite the fireworks we're looking for.

Nope. On Friday, a US intel report was leaked on the situation at the Ukrainian-Russian border. There are already believed to be anywhere between 70,000 and 94,000 Russian troops stationed there. And US intel says the number could go up to 175,000 in the coming weeks. Meanwhile, the Kremlin's using disinformation campaigns (like it does) to paint Ukraine and NATO in a bad light. All of this could be signaling a potential imminent attack – one that Russians could be influenced to blame Ukraine for.

The Biden admin’s penciled in a Zoom meeting with Putin for tomorrow. And has said it’ll make it “very, very difficult” for Russia to take military action against Ukraine. That could mean issuing sanctions or getting allies involved. And the EU has previously approved a resolution to cut Russian businesses from the global financial system if Ukraine is invaded. We'll find out more on how the chat unfolds tomorrow. Putin’s reportedly expected to tell the US that it’ll play nice as long as it doesn’t help Ukraine join NATO – a goal of Ukrainian President Volodymyr Zelensky’s.

Tensions between Russia and Ukraine appear to be reaching another inflection point. Now, the world’s eyes are on the US as it tries to put Putin back in his place.

Bob Dole. Yesterday, the former US senator passed away at the age of 98. He died in his sleep. But had also been battling advanced lung cancer for months. The World War II veteran was widely known in the halls of the Capitol for his wit. He represented Kansas in Congress for a total of 35 years. And was the Republican Senate majority leader in the ‘80s. Dole also tried his hand at the White House three times — including a run against former President Bill Clinton in 1996. He helped push the Americans With Disabilities Act of 1990 across the finish line. He stayed loyal to the GOP and endorsed then-candidate Donald Trump in 2016. But reportedly criticized the party for being too conservative. Now, flags at the White House and public buildings will fly at half-staff to honor Dole.

Myanmar. This morning, ousted civilian leader Aung San Suu Kyi was found guilty of violating pandemic rules and inciting unrest. In February, the military led a coup, declared a state of emergency, and arrested Suu Kyi — claiming election fraud. It sparked major protests. And one group estimates the junta has killed more than 1,300 people and arrested 10,600 others. Suu Kyi has been on house arrest since. And faces a total of 11 charges that could put her in prison for more than 100 years. For now, Suu Kyi has been sentenced to four years in prison. And she has continued to reject the charges.

Who's officially out of a job...

Chris Cuomo. On Saturday, CNN announced it had “terminated” the anchor — effective immediately. Just days ago, the news company suspended him after the NY AG released documents revealing his involvement in advising his brother. Former NY Gov. Andrew Cuomo (D) had been accused of sexual harassment by 11 women, and Chris used his media contacts to look into the survivors. Now, Chris himself has also been accused of sexual misconduct. He denied the allegation. But CNN said they saw "no reason" to delay taking action. Critics are saying 'that's interesting.' And that they've been calling CNN out for months over the conflicts of interest between Chris and Andrew Cuomo.

Michigan. Over the weekend, the parents of the 15-year-old suspect in a deadly high school shooting were arrested and pleaded not guilty to involuntary manslaughter charges. It came after an hours-long manhunt. But the couple's lawyer says they weren't on the run. Last week, their son shot and killed four students at a Detroit-area high school. Authorities say the parents failed to act when their son showed troubling signs or safely store the handgun he used. A judge has set the couple's bond at $500,000 each. Experts say the move to charge the parents in the shooting is almost unheard of.