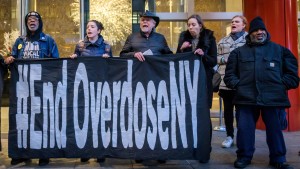 NYC is the first US city to offer official supervised injection sites.

Last year, over 100,000 people died from drug overdoses – a record. And it represents nearly 30% more deaths than the year prior. Of those people, more than 2,000 were New Yorkers. For years, NYC Mayor Bill de Blasio (D) has been in favor of setting up supervised injection sites to help curb the deaths. It's something Europe, Canada, and Australia have already set up to provide a safe way for people struggling with addiction to use drugs. Yesterday, NYC officials said they are opening two supervised injection sites intended to help save at least 130 lives each year.

Tell me about them.

Two orgs that offer clean needles are merging to create OnPoint NYC to offer supervised injection in East Harlem and Washington Heights. Those struggling with substance use disorder will bring their own drugs. But staff members will be present, and can administer naloxone to those at risk of overdosing to reverse the effects. The center will also offer access to addiction treatment and other health services. Research has shown that similar programs in places like Canada and Australia have seen success. They’ve shown to decrease overdoses, public drug use, and HIV transmission. But NYC’s decision is getting mixed reviews.

Many city officials support the measure, saying it’ll improve public health. And advocacy leaders said they hope other cities will follow suit. But some community members reportedly worry that having designated sites could encourage drug use. It all comes as several US cities – including San Francisco and Seattle – take steps to open supervised injection sites. But federal law prohibits offering a space for the purpose of illegal drug use. In NYC’s case, the mayor promised “not to take enforcement action” against the sites – adding that he has the support of local city officials.

Addiction is a disease. But those suffering are often blamed and criminalized. Now, NYC – the country’s most populous city – has become the first in the nation to provide users with some form of official safety. It's a decision that's got many people worried – but that also has the potential to prevent dozens of premature deaths.

PS: If you or someone you know suffers from substance use disorder or addiction, reach out to the SAMHSA’s National Helpline or call 1-800-662-HELP (4357).

Omicron. Yesterday, Moderna and Regeneron gave everyone a warning: their products may be less effective against the variant. The CEO of Moderna – which offers one of the most effective vaccines against COVID-19 – told the Financial Times that there's basically no world in which the vaccine doesn't take a hit on efficacy. As he put it, "this is not going to be good." Meanwhile, Regeneron – which provides a monoclonal antibody treatment – said that it, too, will see a hit on efficacy. More studies are expected over the next few weeks to see just how big of an impact we can expect. It comes as at least 20 countries have detected the highly-mutated variant, which may have circulated in the Netherlands days before it was detected in South Africa last week.

Who’ll have people analyzing every word…

The Supreme Court. Today, it’s hearing arguments on the most consequential abortion case since Roe v. Wade. In 2018, Mississippi’s ​​Republican-led state legislature passed a law banning most abortions after 15 weeks. But Jackson Women’s Health Organization – the state’s only abortion clinic – sued. Now, the legal battle has reached the high court, which isn’t expected to issue a ruling until June. Here’s what to expect:

PS: Here's your Skimm on the history of abortion rights and the legal battles around them today.

The attack at Oxford High School. Yesterday, a 15-year-old sophomore opened fire at the school north of Detroit, Michigan. Three students were killed and another seven were injured – along with a 47-year-old teacher – in what is believed to be the deadliest US school shooting this year. Officials are still investigating a motive, as well as reports that threats to the school had gone ignored. They're also investigating reports that the shooter had impersonated a sheriff to try to get into barricaded classrooms.

Chris Cuomo. Yesterday, CNN announced that its top-rated anchor has been indefinitely suspended. It came a day after the office of NY Attorney General Letitia James (D) released thousands of documents – including text messages and transcripts. They included new details about how the anchor helped defend his brother, former NY Gov. Andrew Cuomo (D), amid his sexual harassment scandal. That includes by allegedly working closely with his brother’s staff – giving them advice on how to deal with the scandal. And by reaching out to journalists to gauge what they knew. CNN suspended the anchor “pending further evaluation.” Chris has yet to comment.

Who’s saying he’s got the cure to politics…

While France makes room for history…