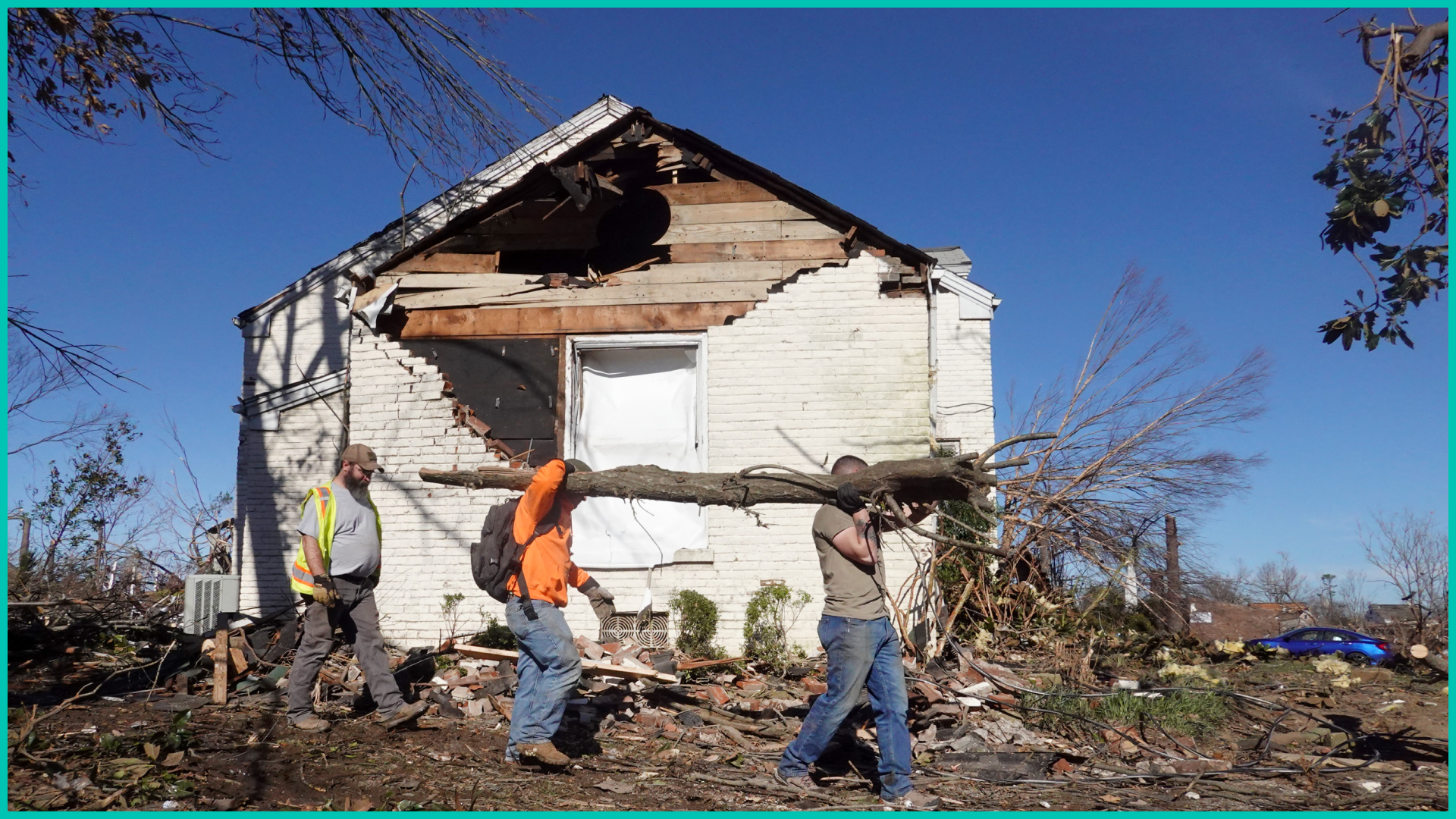 A series of storms have sent six states into mourning.

From Friday night into early Saturday, dozens of tornadoes hit six states: Arkansas, Illinois, Kentucky, Mississippi, Missouri, and Tennessee. But it was Kentucky that bore the brunt of the damage. Eight people at a candle factory have been confirmed dead and eight others are missing. And at least six have died at an Amazon warehouse in Illinois. Search and rescue efforts are ongoing but more than 100 people are feared dead in Kentucky alone.

How could this happen?

Tornadoes are not unheard of in the Midwest and South. But storms like this usually happen in the spring. And these took people by surprise. Another concerning update: researchers reportedly say tornadoes seem to be occurring in greater “clusters.” Meanwhile, the candle factory in KY was reportedly the third-biggest employer in the area. The tornado struck while workers were on the late shift amid the holiday rush and pressure to deliver on gift orders.

Search and rescue. Tens of thousands of people are also still without power. President Biden has approved an emergency declaration in KY which frees up federal resources there. As he put it, “the federal government is not going to walk away.” There could also be questions over the companies’ safety protocols for employees. Amazon CEO Andy Jassy says he’s “heartbroken over the loss of our team members.” The candle factory’s CEO said they too were “heartbroken.”

This weekend marked what Kentucky’s governor called the “most devastating tornado event in our state’s history.” It’s something FEMA’s administrator warns is “going to be our new normal” as climate change gets worse. And as we continue to be slow to take action.

PS: Kentucky’s governor set up a fund to help those impacted by the storms. Here’s where you can donate.

What’s got us checking our spending limits…

Inflation. On Friday, the Labor Department released last month’s Consumer Price Index – aka a temperature check on the cost of goods and services. It showed the sharpest annual rise in inflation since 1982. Prices rose by 0.8% in the month of November alone, and are up 6.8% from last November. A lot of things saw a price hike but things like gas, energy, and clothes (hi, sweatsuits) were hit especially hard. These historic rates are due to a strong combination of consumer demand and supply chain issues.* Thanks, COVID-19.

Psst...need a refresher on what's happening to prices? Watch here and then read up on the seven ways to protect your wallet.

What's still got abortion on its mind...

SCOTUS. Last week, the highest court in the land left in place Texas's six-week abortion ban but allowed providers to challenge the law in federal court. The controversial law is one of the most restrictive in the country. This means that the case will return to a district court.

Omicron.* The variant first flagged in South Africa last month has now been found in more than two dozen states in the US. Delta is already pushing cases up across the country. But if trends follow Europe and Africa, another explosion of cases is expected in the coming weeks. That could include fully vaccinated people (like those who’ve gotten two doses, or one if you’re J&J). The science still isn’t settled about how vaccines hold up against Omicron. But there is some good news: a new study out of Israel showed that a Pfizer booster protected well against the variant – even as the variant has been found in breakthrough cases.

While Taylor Swift can't shake off this lawsuit...