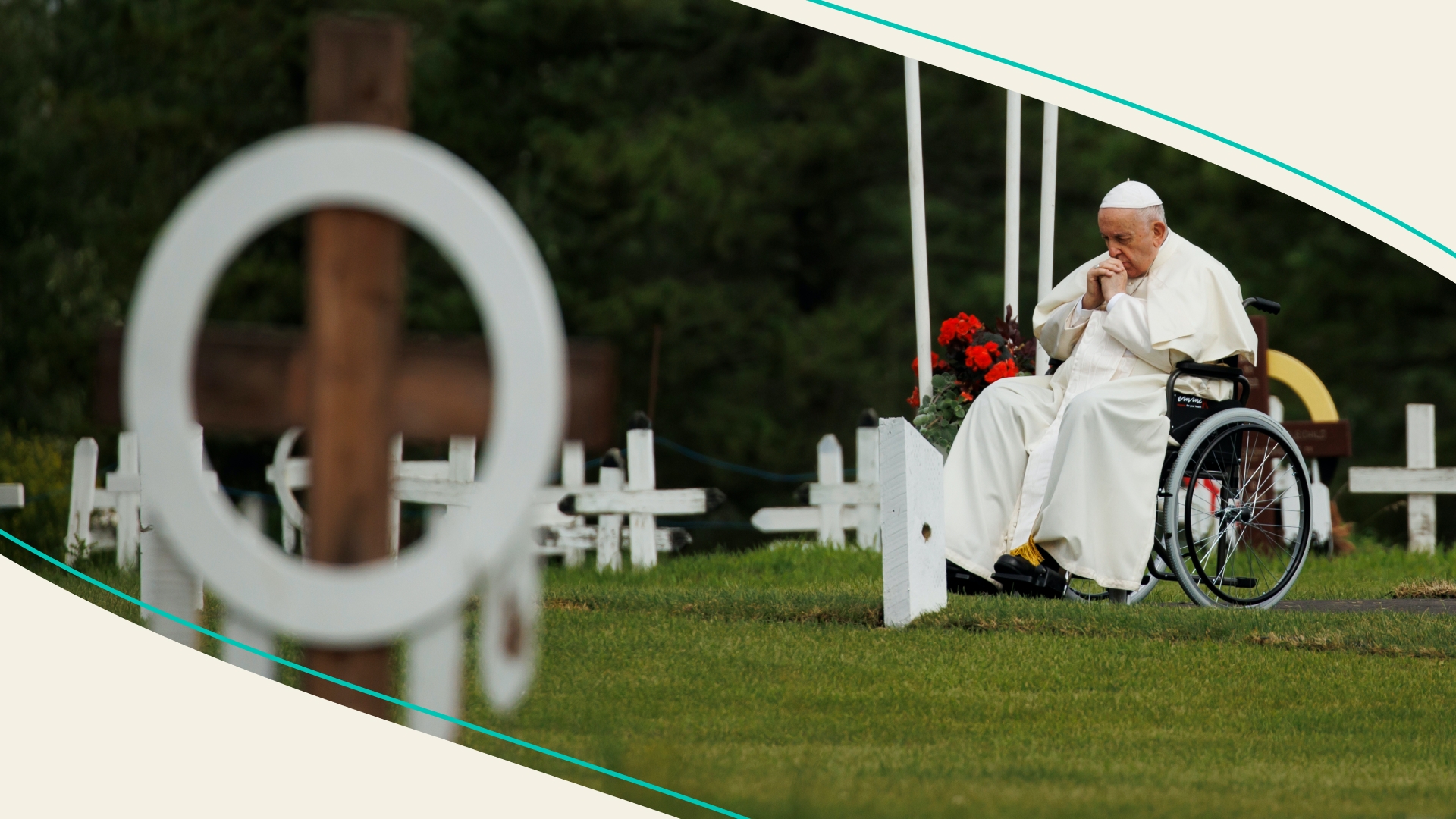 From the 1880s to the 1990s, an estimated 150,000 Indigenous children in Canada were separated from their families and put in boarding schools. They were forced to assimilate into mainstream Canadian culture. But that’s not all: A 2015 report from Canada’s Truth and Reconciliation Commission found that more than 4,000 Indigenous children in those schools died from neglect or abuse. Indigenous communities have found hundreds of unmarked graves.

Yesterday, Pope Francis apologized on the grounds of a former residential school in Canada for the church’s role in the “catastrophic” residential school system. And begged for “forgiveness for the evil committed by so many Christians” against the communities. That’s because the majority of schools were run by the Catholic Church.

Many were moved — and Indigenous leaders gave Francis a headdress. One critic said it isn’t going to make what happened go away, but that it reportedly “means a lot to the elders.” Others reportedly want more than ‘sorry.’ And are asking for financial compensation from the church. It comes after Prime Minister Justin Trudeau apologized last year for the “incredibly harmful government policy.” And earlier this year, Canada acknowledged its long history of violence toward Indigenous communities by agreeing to pay $31.5 billion to Indigenous children and families — and to help reform the child welfare system.

An apology can’t make up for the lives lost and the decades of trauma that Canada’s Indigenous communities endured. But many are glad that the church is finally recognizing its role in the harm.

The State of Abortion Rights

Yesterday, Indiana lawmakers began a special legislative session to debate a near-total ban on abortion. It’s the first session of its kind since the US entered the post-Roe era. Vice President Kamala Harris traveled to the state ahead of the session to host a roundtable with Indiana Democrats. We spoke with VP Harris about how the battle in Indiana highlights the “health care crisis” unfolding in the US.

Q: What's your message for people who feel frustrated by their state government’s response following the reversal of Roe v. Wade?

A: “This is a health care crisis and it demands a response that recognizes that now is the moment and the time to stand up. We need to elect a pro-choice Congress…We need to recognize local elections matter. In these states where they're criminalizing health care providers, pay attention to who you elect as your prosecutor [and] as your DA. Pay attention to the fact that in a lot of the states that are restricting a woman's right to make decisions about her body, they're also restricting access to the voting booth. Who your secretary of state [is] matters, who your governor [is] matters. All of these elections matter.”

PS: Tune in to “Skimm This” this Thursday at 5pm ET to listen to our full interview.

Steven Lopez. Yesterday, a co-defendant of the Central Park Five — now called the Exonerated Five — was cleared of a related conviction. Lopez is considered the “forgotten“ sixth co-defendant of the group of Black and Latino teenagers who were convicted of raping a jogger in NYC in 1989. But in 2002, evidence linked the attack to someone else. Collectively, the five men served close to 45 years in prison before their convictions were overturned. Lopez pleaded guilty to robbing another jogger in order to avoid a rape charge and served more than three years in prison before being released in the ‘90s. His lawyer called what happened to Lopez a “profound injustice” and an “American tragedy.” Lopez only had two words: “Thank you.”

Myanmar. Yesterday, Myanmar’s military (aka the junta) said it had executed four pro-democracy activists. The executions were the first in decades — and came after the junta seized power in the Southeast Asian country last year. Since then, they’ve reportedly killed over 2,000 people and arrested nearly 15,000 others. In this case, the four men were accused of “brutal and inhumane terror acts” and sentenced to death in closed trials. Human rights groups are reportedly concerned there are more executions coming as the military attempts to instill fear. Human Rights Watch condemned the “callous disregard for human life.”

What could be providing some answers…

These studies. UK experts believe a pair of viruses has led to more than 1,000 cases of hepatitis in children across 35 countries — including the US. At least 22 children have died and 46 have needed liver transplants. Now, researchers reportedly say that viruses have taken to the little bodies because infants missed out on immunity thanks to COVID-19 lockdowns. But there’s good news: Serious cases of hepatitis are rare and many children who catch these viruses reportedly recover.

While Subway is putting people in a pickle…

What Keke Palmer is saying ‘nope’ to...

Being compared to others.