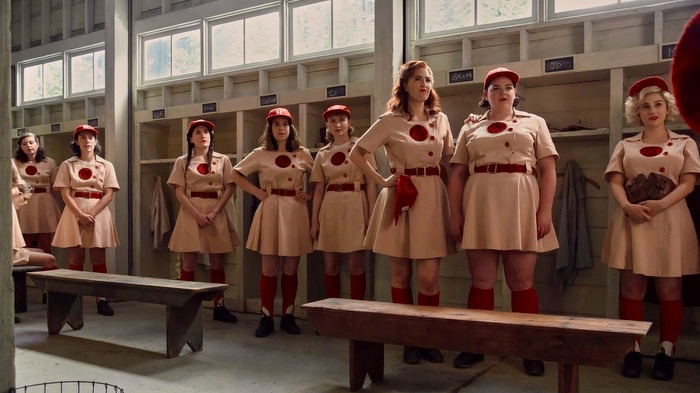 Batter up. Thirty years after it first premiered, “A League of Their Own” is making a comeback. This time, on the small screen. The eight-episode show premieres on Amazon Prime Video on Aug. 12. And while there are some nods to the OG film — like taking place in the 1940s and those iconic uniforms — its plot isn’t exactly the same. Instead, it focuses on a more diverse group of characters with new storylines.

Remind me, what was the original movie about?

The movie takes place during World War II — and follows the real-life All-American Girls Professional Baseball League. Which was created as a solution to help MLB parks keep up attendance as their all-male minor teams disbanded for the war. The movie focuses on one team — the Rockland Peaches — as they struggle to keep the league alive and successful.

Flash forward to 2017, when “Broad City” creator Abbi Jacobson was approached by director and executive producer Will Graham to remake the classic hit. But with a fresh take. Think: including queer characters and addressing racial segregation in the league. This brings us to…

The dramedy still focuses on the Rockford Peaches. And there’s still no crying in baseball. But the TV show primarily follows two women on their journey to the big leagues. There’s Carson (played by Jacobson), who leaves home after her husband is deployed. But she’s still figuring herself out — from exploring her queerness to learning how to be a leader for the team.

Then there’s Max (played by Chanté Adams), whose character was inspired by three Black women who played alongside men in the Negro League. She’s a pitcher who desperately wants to join the all-women’s league. But is turned down because she’s Black. She’s also turned down by the integrated league because she’s a woman. Despite the adversity, she keeps trying to make it.

During the eight episodes, Carson’s and Max’s lives cross paths as they play catch at night, and connect about their queer identities and how they don’t fit into society’s norms. In the background, we also meet the other people on the team. Including “Parks and Recreation” alum Nick Offerman — who plays Casey “Dove” Porter and takes over Hanks’ role as the coach. Although the two characters have entirely different temperaments. Hank’s Dugan was a grump and drunk. While Offerman’s Dove appears to be a class act, according to IndieWire.

And through it all, the show does have moments of nostalgia for the OG fans. (Hint: Someone from the original film makes an appearance, but we won’t say who.) Check out the trailer for a closer look at what to expect.

“A League of Their Own” sheds light on moments that history books routinely leave out. And promises to show the authentic experiences of women’s stories from the past. Now audiences will see if the show lives up to that promise.

PS: Don’t miss Jacobson Skimm the show — and which celebs she’d pick to be in her league — below.