Broken Promises: Brown v. Board of Education And The History Of School Segregation 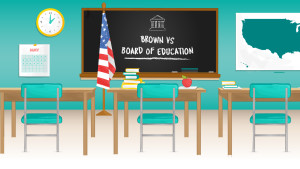 This week marks 65 years since the historic Supreme Court decision Brown v. Board of Education of Topeka. The court ruled that segregation in schools -- aka keeping white kids and black kids in separate schools -- was unconstitutional.

And that was the end of it… right?

Not quite. The Supremes said segregated schools were “inherently unequal.” And ordered schools to desegregate. But it took a while for school districts to get on board. Especially in the South. When the Little Rock Nine showed up for the first day at a majority white school in September 1957, the governor of Arkansas sent the Arkansas National Guard to stop them. President Eisenhower had to federalize the National Guard and send them and Army troops in to protect the students. Judges started putting districts under federal orders to integrate schools. Sometimes, that meant districts had to bus black students from primarily black neighborhoods...to schools that were majority white. And vice versa.

It was. Lots of white parents weren’t happy about this. Not just in the south, but also up north: in cities like Boston. And Detroit. Some families just up and moved away -- to the suburbs. It was called “white flight.” And in the suburbs: they built new schools. Some judges said the kids who’d left still had to get bussed back to the inner city. In order to keep schools integrated. But in 1974, the Supreme Court said they didn’t have to as long as there wasn’t a history of enforced segregation.

So what happened next?

Before Brown v. Board of Education, zero percent of black kids in the south attended majority white schools. By 1988, that percentage jumped to 43 percent. That’s when schools across the country started questioning whether they still had to be under these federal orders to integrate. They started pushing judges to release them from these orders -- and the judges did, one by one.

Brown v. Board of Education was supposed to fix segregation in schools. And in some places -- where local courts doubled down -- it did. In other places, where segregation hadn’t technically been “on the books’: it actually got worse. There are a few exceptions. But now, schools across the country are once again segregated -- especially in the Northeast. In part because the demographics of the country have changed. But also: neighborhoods are still segregated. And fewer schools are required to integrate by court order anymore. It’s been 65 years since Brown v. Board of Education, and segregation is on the rise again.