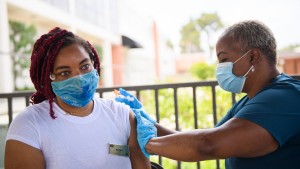 As of early October, about 56% of the US population has been fully vaccinated against COVID-19. And some have been vaccinated for months – receiving their first shot as far back as December. Now the country has administered more than 390 million doses. And some are wondering how long its benefits will last.

Here’s What to Know About Booster Shots…

In August, the CDC recommended that those who are moderately or severely immunocompromised get an additional vaccine dose at least 28 days after their second Pfizer or Moderna dose. That includes including people who have…

In September, the FDA also gave emergency use authorization for a single Pfizer booster shot. But only certain people are eligible for one right now. Including…

The CDC also gave the green light to these groups. At first, the agency’s advisory panel didn’t agree with the recommendation to approve boosters for frontline workers. But CDC Director Rochelle Walensky overruled the group’s decision. She says she “felt it was appropriate” to include that group, based on evidence the FDA and CDC reviewed.

Both Moderna and Johnson & Johnson have asked the FDA to approve their booster shots. And the agency could make a decision in the coming weeks.

A number of countries, including France, Germany, and Israel have offered or plan to offer booster shots to certain people. But in early August, the World Health Organization asked countries to ‘hold the boosters.’ That’s because many living in poorer countries haven’t had a chance to get even one dose yet. Our World in Data shows that only 2.3% of people in low-income countries have gotten at least one shot.

The delta variant accounts for more than 99% of new coronavirus infections in the US. The CDC says that it’s more contagious than other strains – and that fully vaccinated people who experience breakthrough cases (more on that below) can spread the virus. But, the agency also noted that the vaccines authorized in the US are highly effective, including against this variant.

Here’s What You Need To Know About Breakthrough Cases…

The CDC reports that there have been around 22,000 breakthrough cases in fully vaxxed people that resulted in hospitalization or death, as of Sept 27. At that point, more than 183 million Americans were fully vaccinated. Meaning: Breakthrough cases are pretty rare, but can still happen.

Reminder: Vaccines help prevent the spread of COVID-19 and prevent severe symptoms. But they are not a cure for the disease. And do not prevent illness 100% of the time. Other factors outside of variants can also cause breakthrough cases, including timing. It takes a couple of weeks for your body to build up immunity, so you could contract the virus right before or right after you get your shot. If you are exposed to or test positive for COVID-19 after getting vaccinated, here’s what you need to know to keep yourself and others safe.

COVID-19 vaccines are essential in protecting people against the virus. But the virus’s variants are slowing those plans, causing new spikes and breakthrough cases around the world. Officials hope that booster shots will give millions of Americans another layer of protection. Meanwhile as the data rolls in, it’s important to stick to the basics — even if you’re fully vaxxed.

Updated on October 6 – Updated to reflect that Moderna and Johnson & Johnson have asked the FDA to approve their booster shots.

Updated on September 28 – Updated to include the FDA's authorization of Pfizer booster shots for certain groups of people.