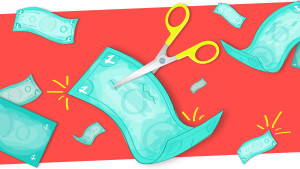 Gee, thanks. I won't drink to that.

It’s not about celebrating the gap – it’s about awareness. In the ‘90s, the National Committee on Pay Equity decided to stop talking about the gender pay gap, and actually show people how bad it is instead. Enter: Equal Pay Day. Today, April 2nd, marks how far into the year women have to work (on average) to earn what men earned in the year prior.

So, this has been a problem for a while.

Yep. The fight for equal pay picked up steam during WWI and WWII. While the men were off fighting in the wars, the women took factory jobs usually reserved for the XY chromosome crowd. Think: "A League of Their Own" sans baseball uniforms. This was one of the first times the country saw a large group of women doing the same jobs as men and getting paid less for it.

Ok but how is this still allowed?

Technically, it’s not. The Equal Pay Act of 1963 made it illegal for men and women to have different paychecks for similar work...except there were some loopholes. Then the Civil Rights Act of 1964 made it illegal to discriminate in the workplace based on things like race, religion, or – you guessed it – sex. Seems like one giant leap for womankind. Except it’s 2019 and the gap still exists.

Is the gap the same for all women?

Nope. It’s worse for some minorities – especially black and Hispanic women. On average, women make about 80 cents for every dollar men earn – though one study says that number could be a lot lower. Let's break it down: the Institute for Women’s Policy Research says that in 2017, white women made about 81 cents for every dollar a white man made. For Asian women, it was about 93 cents. But for black women, it was about 67 cents, and for Hispanic women, about 62 cents.

Pardon my French, but WTF.

Agreed. The industries with the reported largest pay gaps are media, retail, and construction, repair and maintenance. But it’s still an issue in industries across the board, like…

Tech…where some women are starting to take action. In recent years, they’ve filed lawsuits against companies like Google and Oracle for gender discrimination, accusing the companies of paying them less than men. And others like Uber are being investigated for allegedly doing the same thing.

Sports…female athletes want to kick the pay gap to the curb. It’s an issue in sports like golf, tennis, and basketball. But the one that’s been in the headlines most is soccer. Teammates on the US women’s soccer team have become some of the biggest equal pay advocates. The team has won three World Cups compared to the men’s whopping zero. But, surprise, the women are paid much less. Last month, more than two dozen teammates sued the US Soccer Federation over all this. On the bright side, things are looking up for some players. Adidas says it’ll pay the women it sponsors the same performance bonus as men for winning the World Cup – which is going down this summer.

Hollywood…the Time’s Up initiative – started by Hollywood celebs – helped changed the conversation around paychecks. But it’s not all rainbows and unicorns. Last year, it came out that Michelle Williams was paid significantly less than Mark Wahlberg for their movie “All The Money In The World.” Williams apparently made $625,000 – and less than $1,000 for reshooting scenes. Wahlberg apparently made about $5 million – and $1.5 million for reshooting. It was a stark reminder that there’s still more work to be done.

I’m scared to ask, but where are we on progress?

Eh, there’s been some. Like we said, Time’s Up – as well as the #MeToo movement – have put a major spotlight on the issue. Some states and cities have also passed laws to help end the gap. Including NYC, Delaware, Oregon, California, and Massachusetts, which recently passed laws that ban some employers from asking candidates’ salary history. Since women are typically paid less than men, employers could low-ball female candidates if they know how much they were previously paid. In CA and MA, it’s also illegal for companies to ban its employees from talking openly about their salaries. The goal: create more transparency in the workplace.

Love it. Does the rest of the world have the same problem?

Pretty much. The World Economic Forum says that women around the world make an average of 63% of what men earn – and that it’ll take more than 200 years to close that gap. But, again, there’s some progress. While some countries’ constitutions prohibit pay discrimination based on gender (think: France, the Netherlands, Portugal), others are taking things up a notch. Example: Iceland. Last year, it became the first country to make it illegal for men to get paid more for the same job. The law applies to companies with 25 or more employees in the private and public sectors. They have to show the gov that they’re following the law – or else, they’ll face fines. Iceland also holds the top spot for gender equality, according to the WEF. Very (n)ice.

This graph represents the Global Gender Gap for some countries we chose to highlight. It shows the gender gap based on wages and equal opportunities in the workplace, including political leadership. It also includes the disparities in education and overall health.

The gender pay gap is still a massive issue, and it’s not going away tomorrow. But don’t be too discouraged: the progress made in recent years shows that employers and countries recognize the problem, and are trying to make some much-needed changes for women to finally get what they deserve: equal paychecks.