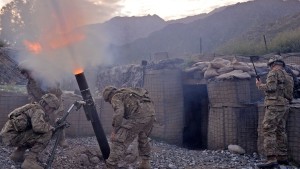 On the 20th anniversary of 9/11, we’re taking a look back at the US-Afghanistan war. The US invaded Afghanistan in 2001. And pulled out of Afghanistan in 2021, hitting President Joe Biden's Aug 31 deadline for all US troops to withdraw from the country. The withdrawal marked the end to nearly 20 years of war. But two weeks before, the Taliban re-took control of Afghanistan, capturing major cities in a matter of days before storming the presidential palace in the nation’s capital Kabul. Afghanistan’s president fled, and Afghan security forces collapsed.

The Taliban’s rapid takeover surprised the world. And left Afghanistan in a state of chaos. Thousands rushed to Kabul’s airport to try and flee on evacuation flights to countries like the US, UK, South Korea, and more. Others closed their businesses and hid in their homes — fearful that their rights and freedoms would be erased under renewed Taliban control. Protesters marched, shouted, and waved the Afghan national flag through the streets, rallying against Taliban rule. But Taliban fighters retaliated with gunshots, beatings, and bombings.

Now, as the world reflects on the past two decades, we’re breaking down the US-led invasion by year and by president, impacts of the war on Afghanistan, and where things could go from here.

Reminder: This is a Skimm’d-down version of a complex war that lasted nearly two decades.

The History of the US-Afghanistan War

Before we get into the US’s involvement in Afghanistan, let’s set the scene and look back at Afghanistan pre-2001.

Afghanistan and other countries in the Middle East have a long history of foreign intervention and conflict. For centuries, a long line of leaders (think: Alexander the Great, Genghis Khan, and more) ruled the region. Including Arab conquerors who helped Islam become the dominant religion there.

Afghanistan Before the US Invasion

1830: The British began to try to take control of Afghanistan, hoping to use the country as a buffer to prevent the former USSR from extending its influence to British India. Britain eventually invaded Afghanistan in 1838, which caused three wars between the two nations.

1919: Afghanistan and Britain signed a peace treaty at the end of the third war, leading to Afghan independence. Afghanistan also became one of the first countries to recognize the Soviet gov during this time. And that came in handy for them because in...

1973: Khan overthrew his cousin (aka the Afghan king) to turn the country into a communist state. The PM then promoted himself to president and the USSR became the country’s closest ally.

1979: Communism started to nosedive in Afghanistan as Islamic leaders fought to regain control. So the USSR decided to step in (read: invaded) to keep the country in line. But a group of fighters known as the Mujahadeen banded together to fight against the Soviet army and Soviet-backed Afghan forces. Meanwhile, millions of Afghan citizens fled to Pakistan and Iran to escape the violence.

1988: Afghanistan got a taste of peace. The US, Pakistan, Afghanistan, and the Soviet Union signed a peace treaty, which officially kicked Soviet troops out of the country. But Afghanistan still had a Soviet-backed president (elected in 1986) still in office. The Mujahadeen wanted him out and continued the violence (think: shooting rockets and looting businesses) to make that happen.

1992: The Mujahadeen captured Kabul and established Afghanistan as an Islamic state. But factions of the Mujahadeen army started to fight each other, each wanting to rule the country in its own way. The internal fighting led to a civil war — which led to the birth of the Taliban.

1996: After much warfare, the Taliban officially took over the country from the Mujahadeen, declaring Afghanistan an Islamic Emirate (aka a land ruled by a usually-Muslim king).

Meanwhile, another terror group was on the move. Remember: Osama bin Laden was in Afghanistan to help the Mujahadeen fight the Soviets before the Taliban took over. In 1988, he and several other militants had formed al-Qaeda (which is Arabic for “the base”). Their plan was to continue fighting countries (like the US) who they believed were against the idea of an Islamic state.

1998: Al-Qaeda led a mission to bomb two American embassies in Africa. President Bill Clinton responded with a missile attack against al-Qaeda training camps in Afghanistan, which were used to train bin Laden’s growing group of supporters. The US demanded bin Laden be extradited to stand trial for the embassy bombings, but the Taliban refused.

2001: On Sept 11, several al-Qaeda terrorists hijacked four planes and crashed them into the World Trade Center in New York, the Pentagon outside Washington DC, and a field near Shanksville, Pennsylvania. Nearly 3,000 Americans were killed on US soil. And the attacks became a generation-defining moment. The US demanded once again that bin Laden be handed over. But the Taliban again refused. This move was one of the reasons behind President George W. Bush’s decision to invade Afghanistan.

2002: A time of major change began: The UN helped create a US-backed government in Afghanistan in an effort to install a democratic system, with a gov council tapping interim leaders and voting on a new constitution (which included rights for women). NATO and US forces helped maintain security in Kabul and administer humanitarian aid.

2003: As the Taliban regime fell, US military pursuits began to shift to Iraq to focus on the larger war on terrorism — including removing the threat of weapons of mass destruction Saddam Hussein claimed to have.

2004: A whopping 10 million Afghan people registered to vote for the first presidential election since 1988.

2005: It was once again time to vote — but this time, for parliament. The nation held its first parliamentary elections in more than 30 years.

2006: Re-enter: The Taliban. Many Taliban fighters had fled to Pakistan after the US invasion. But as the new US-backed Afghan gov failed to bring about lasting change, the Taliban picked up its fight with Afghan security forces in the southern regions of the country.

2009: President Barack Obama took office and recommitted to the war effort in Afghanistan, including the search for bin Laden. He deployed 17,000 troops to Afghanistan in his first year. Their goal was to train Afghan security forces to fight the Taliban. A year later, the number of troops increased to its peak of 100,000.

2011: On May 2, a team of Navy SEALs led a mission into Abbottabad, Pakistan, where bin Laden was hiding in a compound and killed him. The move was a major win for the US. And Obama planned to pull 10,000 US service members out of the region because of it. The decrease in troops signaled that the responsibility of fighting the Taliban would sooner or later be turned to the Afghans. But the mission threw gas on the Taliban’s fire, and the group began planning another resurgence.

2016: Obama approved a US drone strike to take out the Taliban’s leader in Pakistan, saying he posed a threat to peace between his militants and the Afghan gov.

2019: Trump said he wanted to see an end to this war during his term. And troops on the ground needed relief after repeated Taliban attacks. The US started to make progress toward reaching a peace deal with the Taliban. But Trump called the talks off after a US service member was killed in Kabul because of a Taliban attack.

2020: The peace talks were back on and finally signed. The deets: US troops were to withdraw from Afghanistan by May 2021. In exchange, the Taliban would work to stop terror groups (like ISIS-K — a fanatical and brutal offshoot of ISIS) from gaining ground in the country.

The End of the US-led Invasion: The Biden Era and Taliban Takeover 2.0 (2020-present)

2021: Biden picked up Trump's deal and moved the deadline for troops to pull out to Aug 31. He said that the original goal of taking out al-Qaeda had been achieved. And that there was nothing more the US could do for Afghanistan, leaving it to Afghans to decide “how they want to run their country.”

Meanwhile, Taliban forces were on the move for a second resurgence. Here's how things evolved over the past few months…

In August, the Taliban swept through the country, taking over a dozen provincial capitals in just two weeks. On Aug 15, they took Kabul, effectively establishing the Taliban regime once again.

Cue international outrage. And stateside, reviews weren’t much better either...

At the end of August, as the US and other nations worked to evacuate thousands of people, explosions killed more than 182 people outside Kabul’s airport. Including 13 US service members and 169 Afghans. ISIS-K claimed responsibility for the explosions. The US responded with a drone strike, which killed several Afghan children.

Overall, the US helped evacuate a total of 123,000 people out of the country, including about 6,000 Americans. Many Afghan refugees have arrived in cities like DC, Philadelphia, and San Antonio, as well as several countries around the world. (Here’s how you can help refugees.) On Aug 30, one day ahead of schedule, all US troops left the country — marking the end of the 20-year war.

The War’s Lasting Impacts on Afghanistan

With the US finally out of Afghanistan, full control of the country and gov is again in the hands of the Taliban. Leaving the world to watch how the situation unfolds for Afghanistan’s…

What’s Next for Afghanistan

The Taliban’s Supreme Leader Haibatullah Akhunzada arrived in Kabul at the end of August to discuss political and security issues in the country. In early September, the group chose Taliban veterans to form an interim gov — with no mention of if they’ll hold elections or when they’ll create a permanent gov.

They chose Mullah Mohammad Hassan Akhund — who was a Taliban leader back in the ‘90s — as prime minister. And picked Mullah Abdul Ghani Baradar — who signed the deal leading to the US troops withdrawal — as his deputy. Several leaders from the US-designated terror group Haqqani Network were also included on the list. There weren't any leaders chosen from outside the Taliban. Or any roles for women.

The new Taliban regime has a long way to go to make allies. China’s one of the few countries that’s kept its embassy open in Afghanistan — signaling it could be open to doing business with the country’s new gov. Russia might be sending similar signals, too. As for the US, it’s never recognized the Taliban as a gov entity. And is unlikely to do so now.

In the meantime, more than 100 Americans and tens of thousands of Afghan allies are stuck in the country. Including people still hoping to flee to neighboring countries now that the airport’s under Taliban control. The US and 97 other countries signed a deal with the Taliban to allow people to safely leave. But at the end of August, Pakistani and Iranian militaries reinforced their borders, making it difficult for hundreds of refugees to come through. Turkey went as far as starting to build a wall along its border with Iran to block refugees coming through that way. Central Asian countries (like Uzbekistan and Tajikistan) have also seen Afghans try to migrate there.

After nearly 20 years of conflict, the US’s longest war is officially over. It cost nearly $2 trillion dollars and the lives of almost 3,000 American service members, 70,000 Afghan forces, and 50,000 Afghan civilians. The effects of this war will impact generations to come. But for now, all eyes are on the fate of the Taliban — and those left behind in Afghanistan who are still looking for a way out.