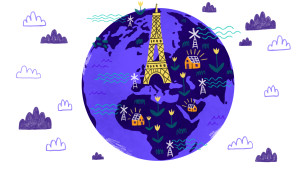 Ok what about this? Climate change is a change in global or regional climate patterns. Global warming is essentially a symptom of climate change. Here's how the Earth’s thermostat works: the earth gets light and heat energy from the sun. Some of that energy gets transformed and released back into the atmosphere. But it has to go through a layer of greenhouse gases to escape.

Well, kinda. Many greenhouse gases are naturally occurring and help make the planet warm enough to live on, by trapping some of the sun’s heat in the atmosphere. The problem is that an increase in greenhouse gases over decades has trapped too much heat, and now Earth is sweating harder than you after hot yoga.

How did that happen?

Most scientists (read: 97%) say that humans are to blame. We create carbon dioxide (a greenhouse gas) when we burn fossil fuels – things like oil, gas and coal – for things like cars and producing electricity. Another main culprit: the methane (which contains carbon) released by things like gas production or livestock waste. Poooo.

Who's the worst offender?

Estimates show China is the biggest producer of greenhouse gas emissions (looking at you, coal). The US – which has historically contributed more to emissions – is second.

Has climate change always been a problem?

The planet’s climate has always been changing because of things like ice ages and small changes in Earth’s orbit. But things took a turn during the Industrial Revolution, when Europe and the US started going all in on things like factory production and railroads. Great for advancing trade and technology. Not so great for keeping greenhouse gas emissions in check.

So what’s happening as a result?

Most of the rise in the Earth’s temp has happened in recent decades. And it’s leading to things like rising sea levels, melting ice caps, heavier rainstorms, droughts, flooding, intense heat waves, and more extreme wildfires and hurricanes. See: Hurricanes Florence, Harvey, Irma, and Maria, Cyclone Idai, California wildfires, and flooding in the Midwest. Just to name a few.

Yikes. What about these deadlines I keep hearing about?

In October 2018, the UN put out a report saying that we have until 2030 to massively reduce greenhouse gas emissions or risk a severe climate crisis in our lifetimes. As in more frequent droughts and flooding, and extreme heat that could lead to things like food shortages and potentially affect hundreds of millions of people. The report was written by almost 100 international experts on climate change, looking at more than 6,000 studies.

Speaking of, what’s all the latest research?

We Skimm’d it for you. Catch up here.

Many areas around the world are already experiencing the severe effects of climate change. Cities, states, and countries are taking action – but climate experts say they’re not enough. Here’s how you can make an impact.