Immigration in the United States: Here’s what drives policy 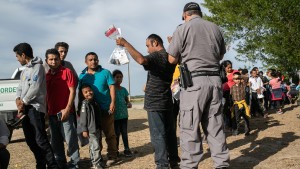 America has been wringing its hands over how to approach immigration for years.

Throughout history, US immigration laws have reflected an evolving set of values and priorities. Whether it was admitting immigrants based on race (yes, this was a thing until the ‘50s) or developing a more comprehensive refugee policy in the wake of international crises (think: the Vietnam War). This timeline breaks down the major moments.

But what’s the overall driving factor of US policy?

It’s a combo of things related to security, the economy, and the country’s moral obligations. There are competing strains of thought. On one side, it’s that immigrants make significant contributions to society – by filling jobs, creating culturally diverse communities, and boosting America’s competitiveness and standing on the world stage. On the other side, it’s that immigration can’t be a free-for-all. The US likes law and order (the OG version, not SVU).

Really? SVU is so much better though.

We’ll save that debate for another time. Anyway, in recent months, there’s been a surge of people coming to the US through Mexico, leading to a further backlog of asylum requests that could take years to be heard in court. Reports have come out about overcrowding and unsanitary conditions in detention centers. Meanwhile, the Trump admin is determined to discourage migrants from coming to the US, arguing that their asylum cases aren’t legitimate.

A few things. First, many migrants are fleeing high levels of poverty and violence in an area called the Northern Triangle: Honduras, El Salvador, and Guatemala. These are three of the most dangerous countries in the world, in part due to gang violence. In 2015, El Salvador had the highest homicide rate in the world for a country not at war. The countries are also dealing with things like government corruption and struggling economies.

So it makes sense that people want to leave…

Correct. Although violence in those countries has started to go down. And overall, the number of people apprehended for trying to illegally cross the Southwest border has been trending downward for the past nearly-two decades.

I’m sensing a ‘but’ coming…

Correct again. In recent months, those numbers spiked – to the highest levels seen in more than a decade. We get into why that is, plus some key flashpoints in the immigration debate, in theSkimm app. Every week, the app goes deep on a different news topic to give you the context you need to understand what's going in the world. Download the app now, and you get the first week free.