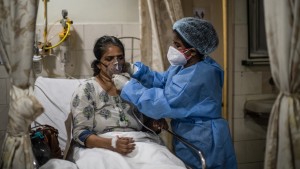 More than half of all US adults (read: around 58%) have gotten at least one COVID-19 vaccine dose. And President Biden has set a new inoculation goal: get 70% of Americans at least one dose by July 4. While there's still more work to do on that front, we're also starting to see coronavirus cases drop. But the recent success in the US (remember: it still leads the world in COVID-19 deaths and cases) is a different picture compared to what’s going on across the globe.

The world is continuing to experience outbreaks, especially in lower- and middle-income countries. That includes India: since March, new variants and loosened restrictions have led infections to skyrocket there. The outbreak has overwhelmed the country's health care system, leading to shortages of medical oxygen and hospital beds. In early May, it became the second country (after the US) to surpass 20 million coronavirus cases. And it's broken multiple daily records for case counts, reporting more than 400,000 cases in a single day for consecutive days. The US and other countries have banned travel from India. And the surge is having ripple effects on the rest of the world.

The breakdown: how India’s outbreak affects the world…

Last year, India – home to the world's largest vaccine producer – promised to produce 200 million vaccine doses to COVAX (which is co-led by the World Health Organization, Gavi, CEPI, alongside UNICEF, and aims to bring more than 2 billion vaccine doses to poorer, developing countries). But in March, India’s gov cut back on vaccines exports as it shifted its focus to getting jabs into the arms of its citizens (currently only about 3% of India's 1.3 billion population is fully vaccinated).

This shift in vaccine priority is now impacting poorer nations in Africa and Asia that are also in need of vaccines. To put this into perspective: according to the Wall Street Journal, COVAX expects to ship only 145 million doses by the end of May – a reduction from almost 240 million expected shots – that would cover less than 2% of the populations of the countries receiving the vaccines. The decrease is contributing to larger concerns about vaccine inequities around the world.

This surge isn’t just causing issues with global vaccine supplies. India is the world’s sixth-largest economy, and many countries and industries rely heavily on the country for things like clothing and textiles, pharmaceuticals, and technology. Any COVID-19-related changes in India – whether it be a national lockdown, scaling back on exports, or simply having fewer workers – could have global ramifications, potentially resulting in supply shortages.

What’s being done to help…

Countries like the US and the UK are sending much-needed supplies to India (think: raw materials to make vaccines, medical supplies). And in May, the Biden administration said it's in favor of a proposal to temporarily lift intellectual property rights for COVID-19 vaccines. The move would allow companies around the world to make generic versions of shots (like Pfizer's and Moderna's) years ahead of schedule. Supporters say it could speed up developing countries' access to vaccines. But critics point out that the move wouldn’t put vaccines in arms any faster and could lead to issues like counterfeit vaccines in the supply chain. All 164 countries in the World Trade Organization need to sign off for this proposal to pass, and it could take months to hammer out the details.

Also in May: the World Health Organization gave emergency use authorization to a COVID-19 vaccine made by Chinese company Sinopharm, which has a 78% efficacy rate. It’s the first time the org has authorized a Chinese vaccine. And the move could help pave the way for poorer nations to get doses, including through programs like COVAX.

A big way to help countries (like India) that are still reeling from COVID-19 is by donating to organizations working on the frontlines. Here are some orgs to consider supporting...

You can find more ways to help here. And if you're not sure how to vet charities, we've got some tips.

While some parts of the world are vaccinating people quickly and easing restrictions, other parts are still struggling with COVID-19 outbreaks and calling for help. COVID-19 is and has always been a global problem – and it’s going to require a global effort to combat it.