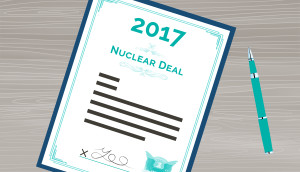 Back in 2015, Iran and the international community

shook on a deal

Iran had been working on a nuclear program

. It’s said it wants to create nuclear energy for peaceful purposes (think: electricity). But the US, EU, UN and others think it wants to build a nuclear weapon. To try and stop that from happening, they hit Iran with

Why does no one want Iran to have nuclear weapons?

Because what happens in Iran does not stay in Iran. The country

that’ve been in the headlines in recent years (think: Hezbollah, Hamas). Israelis are worried because not only have these groups pledged Israel’s destruction, Iran’s leaders have also said Israel should be

Plus, the West thought Iran had been going Walter White on them by

Tell me about the deal.

In late 2013, Iran and a crew of countries – the US, Germany, the UK, France, China, Russia – agreed to a temporary nuclear deal while they worked out a more permanent solution. Those talks got extended

agreed to a deal

What's in the deal?

severely scale back its stockpile of uranium

What did people say?

We really don’t know what all the fuss is about.

This program is peaceful.

Has everyone lost their minds? Before the deal was in place, Israeli PM Netanyahu felt so strongly that he controversially

came to the US to tell Congress

that the deal is bad news. Because, reminder, Israel and Iran have a ‘hate-hate’ relationship. Israel says Iran's nuclear goal has not been peaceful – and that it has

receipts to prove it.

Since Iran is our least favorite neighbor in the area, we have some

raised over this nuclear program. We think the deal will give Iran the economic wiggle room to focus on the instability in the region. Where we’re

for influence. And if Iran gets nuclear weapons,

we want them, too.

a deal to build nuclear reactors

Iran’s nuclear program needs a bouncer to watch over things. If Iran decided to go rogue – which would mean cheating on its end of the deal – the US

would have time to step in

If you give Iran a nuclear inch, it will make a weapon. We

, and we think this is a bad deal. So bad that we

Fast forward to President Trump. He's been very much

He 'decertified' the deal back in 2017. Which gave Congress 60 days to decide whether to re-impose sanctions on Iran and effectively end the deal. It didn’t do anything. So after a few months Trump said,

PS: Want to know more about the history of the Iran nuclear deal? Skimm Notes – our in-app audio series – has you covered.