Juneteenth: A Celebration of Black Independence 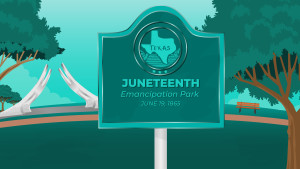 It’s often misunderstood: the Emancipation Proclamation declared slaves free in the rebellious states. Which meant the southern states that already weren’t loyal to the Union. But in order for the Union to enforce the proclamation, they had to get those southern states under their control. So a bunch of slaveholders in the South headed to Texas, which was for the most part, geographically isolated from the war. Texas saw a huge surge of its slave population; basically 1 in 4 families owned slaves.

Why is that important?

But the Union Army wasn’t just going to let that happen. By June 19th, 1865, it had reached Galveston, Texas. Major General Gordon Granger stood on a balcony and declared all slaves free. But it was easier said than done. Slaveholders reacted in a lot of different ways: some let their slaves go freely, others asked them to stay on and work for wages, but some murdered their slaves before they could escape. In December 1865, the 13th Amendment was ratified, officially abolishing slavery.

But for former slaves in Texas, it was that first balcony announcement that mattered most. So the very next year, on June 19th, 1866, they celebrated the anniversary -- and called it Juneteenth. In 1867, Juneteenth was celebrated for the first time in the Texas state capital.

Some former disgruntled slaveholders weren’t too happy about these parties and tried to stop them, sometimes with violence. So black churches started to raise money to buy their own land to have a place to celebrate. In 1872, former slaves raised $1,000 and bought 10 acres in Houston. They named it “Emancipation Park”. Today, it’s the oldest park in Houston, Texas.

Juneteenth is still celebrated today. It’s seen as, and sometimes called Black Independence Day or Emancipation Day. There are parades, cookouts, dancing, and the celebration of black culture. The state of Texas was the first state to formally recognize Juneteenth as a state holiday in 1980. Today, 45 states plus Washington D.C. recognize the day, but the fight continues to officially honor Juneteenth as a national federal holiday.