Labor Unions Have Made Their Way Into Your Feed. Here's Why. 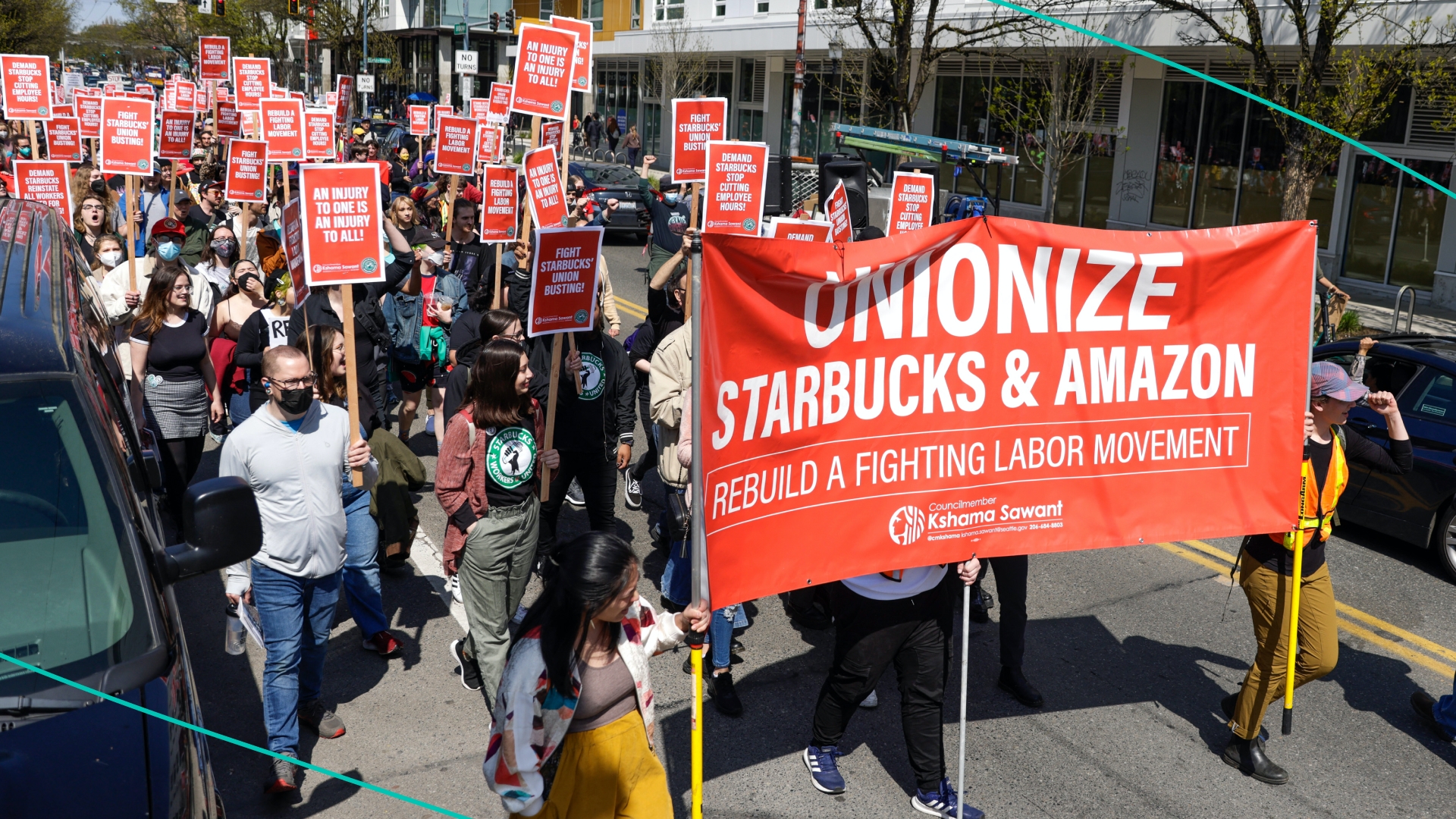 Prior to 2021, labor unions seemed like a relic of the past. Case in point: In 2019, 10.3% of US workers were repped by unions — the lowest since the Bureau of Labor Statistics first conducted the survey in 1983. And it repeated in 2021. But like pretty much everything else in our lives, the COVID-19 pandemic changed things.

As a result, more and more workers have been attempting to unionize. Between October 1, 2021 and March 31, 2022, union representation petitions went up by 57%. Now, employees across industries are saying 'it's time.' And are exploring their union options — including workers from Amazon, Apple — and even Delta. Here’s how this whole thing started.

Labor unions’ long history in the US

Quick reminder on how labor unions work: They’re groups of workers that band together on work-related decisions (think: hours, wages, benefits) through collective bargaining. Members pay dues that go towards things like representation, political campaigns, and paying union leaders and staff. Union reps negotiate with employers on their members’ behalf. The idea dates back to the 1700s, when printers in New York joined forces to ask for a wage increase. But unions didn’t really pick up steam until after the Civil War.

Enter: the Industrial Revolution. The uptick in mass production meant more jobs. And an influx of immigrants coming to the US meant more people willing to take on those jobs. These circumstances created a power gap between employees and their bosses — who could get away with paying workers low wages and forcing them to work long hours.

But workers started to fight back through, drum roll please, labor organizations. And in 1935, President Roosevelt signed the National Labor Relations Act. Which established the right to join a union, go on strike, and collectively bargain (though it’s still illegal for federal workers to strike).

While the numbers may seem low, there are still millions of Americans who are part of one. And unions appear to have an advantage when it comes to pay: Data from the Bureau of Labor Statistics from 2019 shows that nonunion workers make less than union workers (specifically, about 81 cents to union workers’ $1).

Fast forward to the COVID-19 pandemic — and unions are once again in the spotlight. Especially as workers from all sectors weigh the importance of fair wages, benefits, and work conditions. Which brings us to…

The recent push for unions

Organized labor efforts at a growing number of companies have been making headlines. Like…

The e-commerce giant has been accused of treating its employees unfairly multiple times. Some examples: limiting bathroom breaks and firing two employees who spoke out against its climate change and labor policies. In April, workers at a Staten Island, NY facility voted to unionize — making it the first union in the tech giant's history. That month, another facility in the borough also took up the issue. But ultimately, workers there voted against forming a union.

In December, employees at a Starbucks in Buffalo, NY checked 'yes' to forming the chain's first union. Which was a welcome sigh of relief to workers who made complaints about the coffee shop's wages and working conditions. Starbucks has been fighting workers’ attempts to unionize. (Think: anti-union meetings and appeals to union rulings.) But since Buffalo's big win last year, at least 16 stores have followed suit. And petitions have been filed in a number of places, including in California, Kansas, and…

Another one. Its employees in Atlanta became the first to file for unionization for better pay and benefits. It's unclear when a vote could happen. Workers in NYC are also collecting signatures to file for similar reasons. Either of these stores could be a first for Apple in the US. Some Apple stores have since upped pay for retail workers. But in some cases, they were nominal — between 2% and 10%, Bloomberg reported.

Flight attendants at Delta Airlines are pushing their rights to new heights. While flight attendants at other major airlines are unionized, those at Delta aren’t. As they’ve begun pushing for organization, Delta announced a new policy change. Beginning June 2, attendants will be paid half their hourly rate during boarding (aka, the 30 to 50 minutes when passengers are filing onto the aircraft and getting settled). Before, flight attendants’ clocks started when the cabin doors closed. TBD if the change affects the union drive.

While many businesses have wanted unions for a long time, COVID-19 gave some the push they needed. Here’s why…

How COVID-19 has amplified calls for organized labor

A variety of issues caused strikes throughout the pandemic — including the need for better wages (think: historic inflation) and safety protocols when dealing with COVID-19. This all had a major impact on…

The labor movement has helped give employees a voice, establish higher work standards, and provide economic mobility for the middle class. Pew Research found that 61% of Americans think the decline of union memberships is bad news for the US and workers. But the COVID-19 pandemic has created a spark in organized labor. And as more unions successfully form, more employees are asking, ‘do I deserve more?’

Updated on May 2 to reflect the second Staten Island Amazon facility vote.

Updated on April 26 to include the latest successfully formed unions and efforts of the Biden admin.