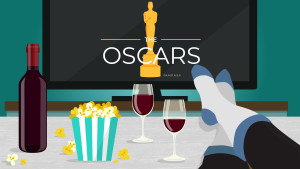 My favorite time of year.

It’s definitely an entertaining one. Every year, awards season culminates with the Oscars, the annual party to celebrate the crème de la crème of the film world. This year, it's going down on Sunday, February 9 at 8pm ET on ABC. The Academy of Motion Picture Arts and Sciences –  a group of more than 8,000 members who’ve worked in the movie industry – chooses the nominees and winners.

How does that work?

Members typically nominate those in their field. For example: actors nominate actors, directors nominate directors. You get the (motion) picture. Once nominations are out, anyone can vote for anyone in any category to win the little gold man. Problem is, both the nominees and winners have largely looked the same over the years.

We are. The Oscars’ diversity problem has been in the spotlight since 2015. That’s when #OscarsSoWhite started trending because there weren’t any people of color nominated for acting prizes. Also an issue: the fact that the awards tend to be male-dominated, especially in high-profile categories like directing. But the academy said ‘we hear the critics loud and clear,’ and set a goal to double the number of women and minority academy members by 2020.

How’d that work out?

While the academy has invited new members, it’s still largely made up of white men. When  this year’s nominees came out, people were frustrated with how few people of color were nominated for acting prizes. And about the fact that zero women were nominated for best director. For context, in the Oscars’ 92-year history, only five women have received a directing nod...and only one woman has won – Kathryn Bigelow for “The Hurt Locker” in 2010. It’s not clear if the academy will make any significant changes in the future.

Hm. So what was nominated this year?

A lot of movies based on or inspired by events that went down IRL. Here’s the context you need to know about some of the year’s top films…

Maybe it’s been a minute since your last history class, so we’ll refresh your memory: World War I started in 1914 with the assassination of Archduke Franz Ferdinand – the heir to the Austro-Hungarian empire. That led to a conflict between the Allied Powers (mainly France, Great Britain, Russia, and the US) and the Central Powers (mainly Germany, Austria-Hungary, and the Ottoman Empire). And continued until the Allied Powers declared victory in 1918.

The movie takes place in, you guessed it, 1917. After their phone lines are cut, a British general (Colin Firth) sends two soldiers by foot to warn their fellow troops that the Germans are about to ambush them. One of the messengers’ brothers is at risk of being killed in the attack. The movie follows these two men on their miles-long, nearly nonstop journey, and is filmed to look like one continuous shot.

This specific story didn’t actually happen. But the movie’s director Sam Mendes was inspired by his grandfather’s experience during the war as a “runner” (a messenger for the British).

“Once Upon a Time...in Hollywood”

This movie is loosely based on real events. It takes place against the backdrop of the late 1960s, when the hippie counterculture movement was upending Hollywood (and America). Film studios were starting to transition from traditional westerns to experimental movies that didn’t shy away from sex or violence.

That world aka New Hollywood is where we find the characters in this movie: Rick Dalton, a fictional TV actor fading from the limelight (played by Leo), and his stuntman Cliff Booth (also fictional, played by Brad Pitt). Their stories intersect with the real-life Sharon Tate (Margot Robbie), at the time an up-and-coming actress who was married to famous director Roman Polanski. In 1969, she and four others were murdered by members of the Manson family – the cult that followed Charles Manson. We won’t spoil it, but the movie takes some liberties with her story.

We get into the other Oscar-nominated movies, plus the snubs, in theSkimm App. Every week, the app goes deep on a different news topic to give you the context you need to understand what's going on in the world. Download the app now and you get the first week free.