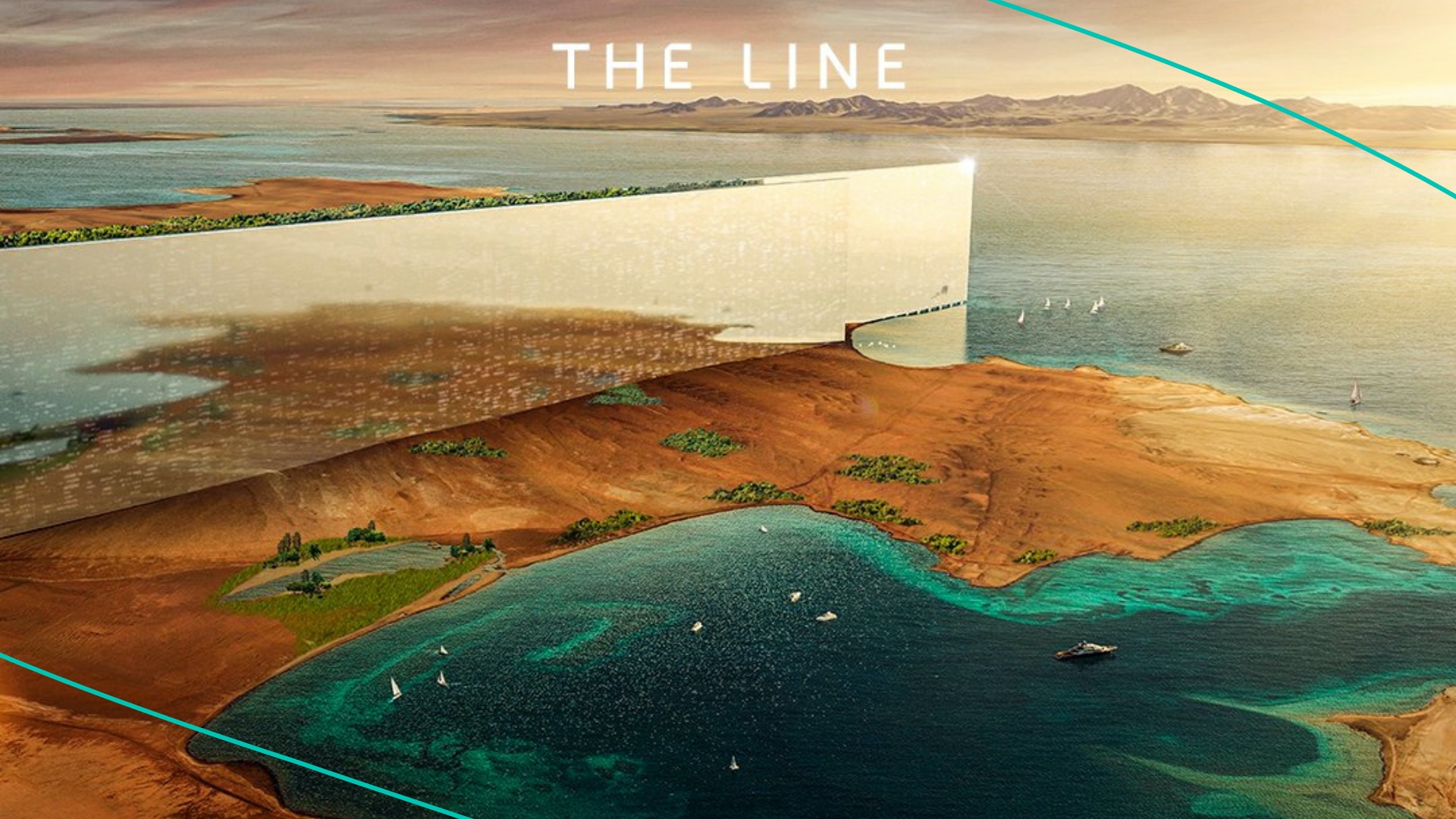 Looking for an urban oasis that won't kill the environment? Saudi Arabia says look no further. Picture this: A roughly 105-mile-long city. Enclosed by two mirrored skyscrapers. Planted in the desert. But also gets mountain views. It has no roads, no cars, and no emissions. And no, this is not the opening sequence to a "Black Mirror" episode.

Saudi Arabia's Prince Mohammed bin Salman is saying meet the smart city of the future, aka Mirror Line or The Line. And is using it as the kingdom's potentially trillion-dollar answer to problems stemming from climate change. But many are saying is this a good thing? Or are we stepping into a dystopian fantasy? Here's what you need to know.

What the city has to offer: From robot maids to a huge fake moon

The Line is one part of the soon-to-be mega-city called Neom. It's expected to revolutionize the dry, desert lands of the country's northwest region. And be about the size of Massachusetts. The overall project aims to bring in some tourism cash so the country can stop relying so heavily on oil sales.

The Line was announced back in January 2021, and comes with a big mission. Like solving how climate change affects the way humans live. Here's what future residents of the smart city can expect:

Oh and, according to the Wall Street Journal, it'll also have:

And it’s going to cost a subtle 1.2 trillion riyals (or $319 billion). The project is backed by a combo of the Saudi gov, Saudi Arabian Public Investment Fund, plus local and international investors. It’s expected to create 380,000 jobs, and be move-in ready by 2030. That’s right, in just eight years. Making it an expensive, ambitious venture. That for some sounds a little too perfect.

The lines of criticism being drawn

The Line is being built in the Tabuk province of northwestern Saudi Arabia — where the Huwaitat tribe have lived for centuries. But with construction starting, the Huwaitat people have been forcibly evicted from their homes. And as with most things in Saudi Arabia, speaking out against the project wasn’t advised. Especially after the death of tribal activist Abdul-Rahim al-Huwaiti — who was killed after making videos protesting the evictions.

While the gov hopes to attract more visitors and residents with the city. People are raising eyebrows, given the country’s track record with human rights. Especially against migrant workers. Plus, there’s concerns around how The Line will impact bird migration in the area. Since the structure will disrupt their pathway, according to the Wall Street Journal.

Others question if it's even technologically and environmentally friendly to build. Senior adviser to the New Urban Mobility Alliance Carlos Felipe told NPR that "this solution is a little bit like wanting to live on Mars."

He also questioned if it would take away from people wanting to experience something that isn't man-made — like simply going outside. “This seems impossible, greatly limited or just plain artificial," he added.

Meanwhile, this idea isn’t exactly new. Many have tried these futuristic city ideas before. Like Alphabet’s failed Quayside project in Toronto. Or the struggling Songdo smart city in South Korea. Only time will tell if Saudi Arabia can draw The Line between success and sustainability.

Saudi Arabia’s new city promises a zero-emission, near-perfect vertical smart world. But it comes at a price: Billions of dollars, and displacing entire communities and animals. Forcing many people to consider if it’s actually worth making at all.