ISIS vs. ISIL: The names of the Islamic State 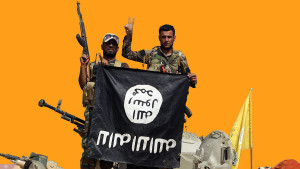 You’ve heard that there’s a brutal terror group based in Syria and Iraq. Some call it ISIS, other ISIL. You’ve heard that it has affiliates around the world, beheads Westerners on camera, and has carried out terror attacks in the Mideast and Europe — most recently, in Paris. You just don’t know what to call it.

So there’s a menu of options...

AQI...as in “al-Qaeda in Iraq,” and where this crazy name train begins. Back in 2003, the group started out as al-Qaeda’s Iraq affiliate and used this name. A little over a decade later, al-Qaeda decided its Iraqi spawn was too extreme to hang out with, and they parted ways. Hence why nobody says AQI anymore.

ISI...as in the “Islamic State of Iraq,” or the group’s way of growing up and distancing itself from its al-Qaeda parents. This name was used in the late 2000s, right up until Syria’s civil war presented a nice big golden opportunity to expand. And get a new name.

ISIS...as in the “Islamic State of Iraq and Syria” or “Islamic State in Iraq and al-Sham.” The “al-Sham” part basically refers to Syria and the surrounding area. In 2011, the brutal civil war began in Syria between President Assad and rebel groups trying to oust him. Since nobody loves a power vacuum more than terrorists, ISI moved into the country and gave itself another “S.”

IS...as in the “Islamic State.” Last year, after ISIS went on a massive land-grabbing spree, it decided to drop the “in Iraq and Syria” bit. Hint: its ambitions go way beyond just that region of the Mideast. And, speaking of...

ISIL...as in the “Islamic State of Iraq and the Levant.” This is what President Obama calls the group. The “Levant” is a really old term referring to a lot of territory in the Mideast, which the group aims to control someday.

Un-Islamic Non-State...as in UN Secretary General Ban Ki-Moon’s own personal nickname for the group. Because nothing stings like a double negative.

Daesh...as in the name the group doesn’t want to be called. “Daesh” is the Arabic abbreviation for ISIL. It also happens to sound a lot like the Arabic words for “stomp” or “scrub.” This is what French President Hollande calls the group. PS: it’s pronounced “dash.”

Caliphate...as in how the group wants you to categorize it. A caliphate's an Islamic state that has absolute authority and legitimacy. What it doesn't have? Absolute likability.

F****ing a**holes...as in what John Oliver thinks you should call them.

Regardless of its name du jour, everyone's calling this group what it is: a big problem. Now, world leaders are regrouping to work out a new strategy against it.