5 Photojournalists On The Russia-Ukraine War: ‘People Shouldn't Look Away’

On Aug. 24, Ukraine celebrates 31 years of independence from the Soviet Union. It also marks six months to the day since Russia invaded the country — initiating the largest attack in Europe since World War II. From the beginning, the world has been watching as journalists documented the war’s impact on innocent civilians. Including everything from the refugee crisis to alleged war crimes. But in a world (and internet) filled with countless headlines, coverage of the war has dwindled.

Now, a highly-anticipated book is offering a reminder: Don’t forget about the war or the Ukrainian people. “Relentless Courage: Ukraine and the World at War” — available Oct. 25 from Blue Star Press — weaves the work of dozens of world-renowned photojournalists to highlight the war’s path of destruction. And above all, Ukrainians’ resilience.

Ahead of the book’s official release and Ukraine’s Independence Day, theSkimm talked to five award-winning photojournalists whose work is featured in photographic essays:

Here’s a sneak peek at their photographs — which captured Ukrainians' courage, and the stories behind them.

A spotlight on the babushkas 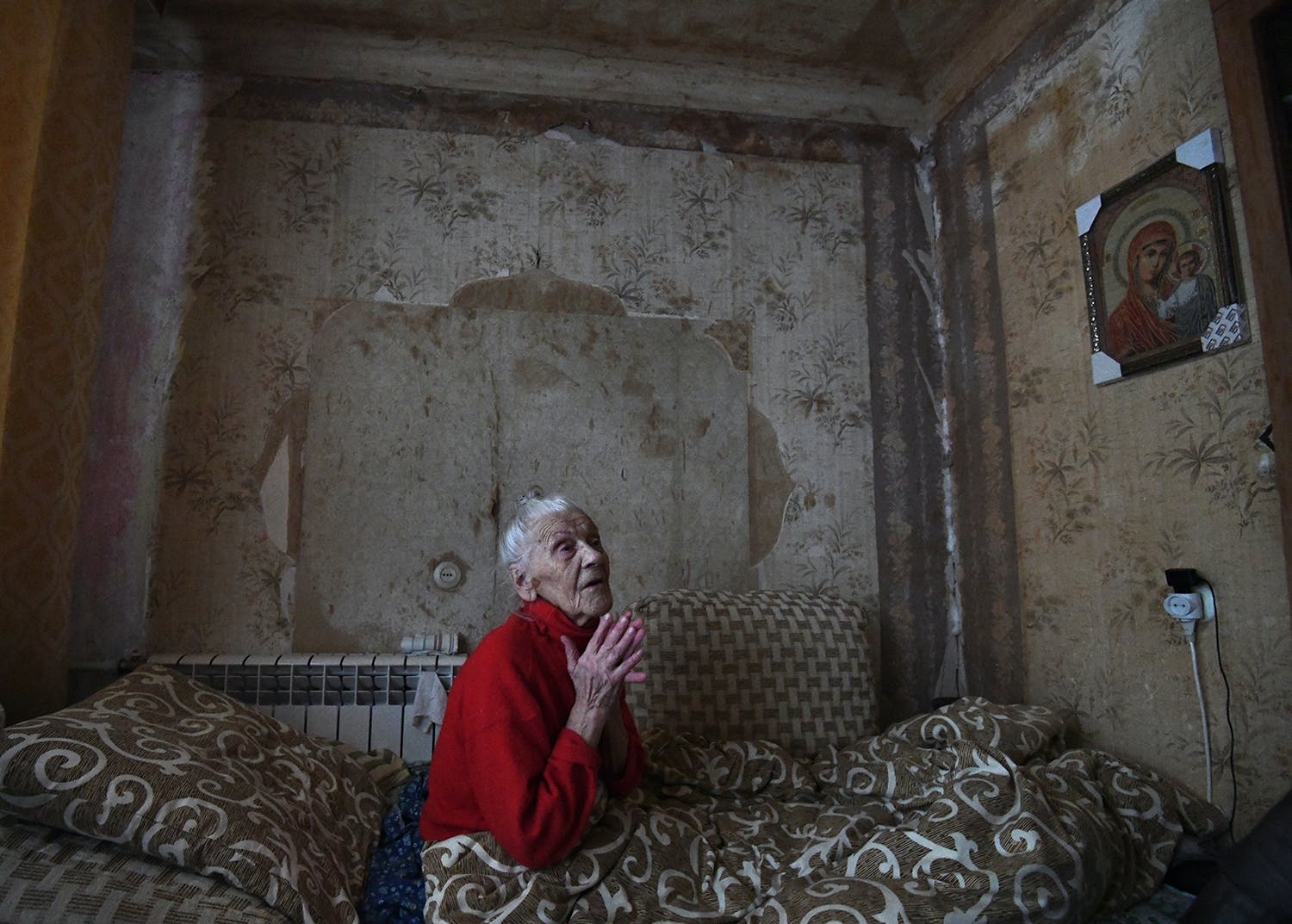 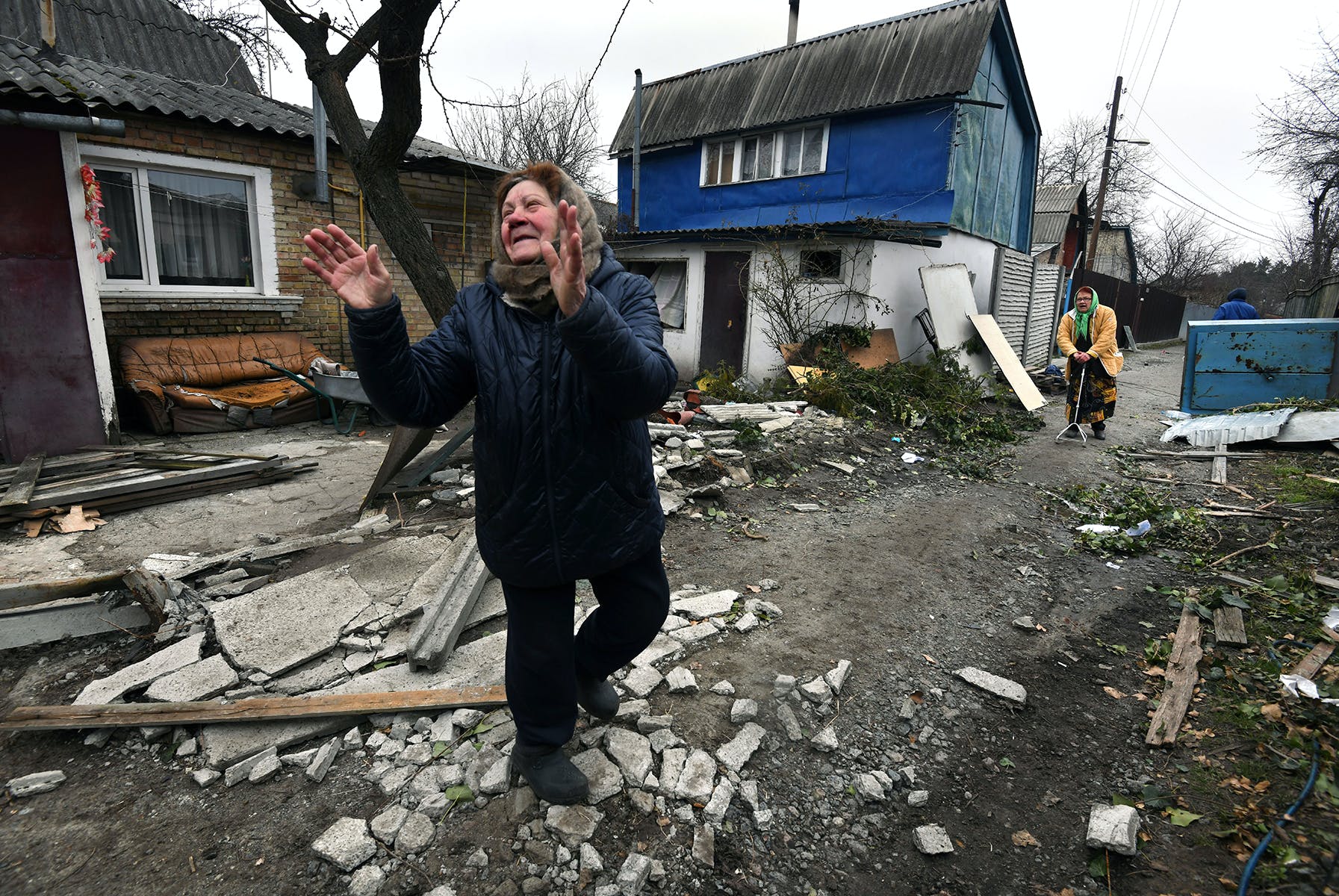 When Carol Guzy first arrived in Ukraine, she found a group that was traveling and delivering food to the sick and the elderly. That’s how she met the “little babushkas” — a loving term for grandmothers — and got the idea to do a portrait series on them. They lived in a basement in Bucha.

“I just felt like they really were charming, adorable, brave, and very strong [women]. I don't think I would've stayed in a dark, damp basement, but their choice was to stay,” Guzy said. “I wanted to highlight the fact that they were targets and this was who the shelling was affecting and killing.”

The photographic essay on the babushkas features several women who — despite living in a war zone — still show compassion and love to others. “One of the ladies, Tatiana, didn't speak any English — most of them don’t. The only words she knew were I love you. And at one point she hugged me and said, ‘I love you.’”

To Guzy, these women symbolize hope in every way. “Our challenge is to try to show the spirit of the people, not only the disaster,” she added. 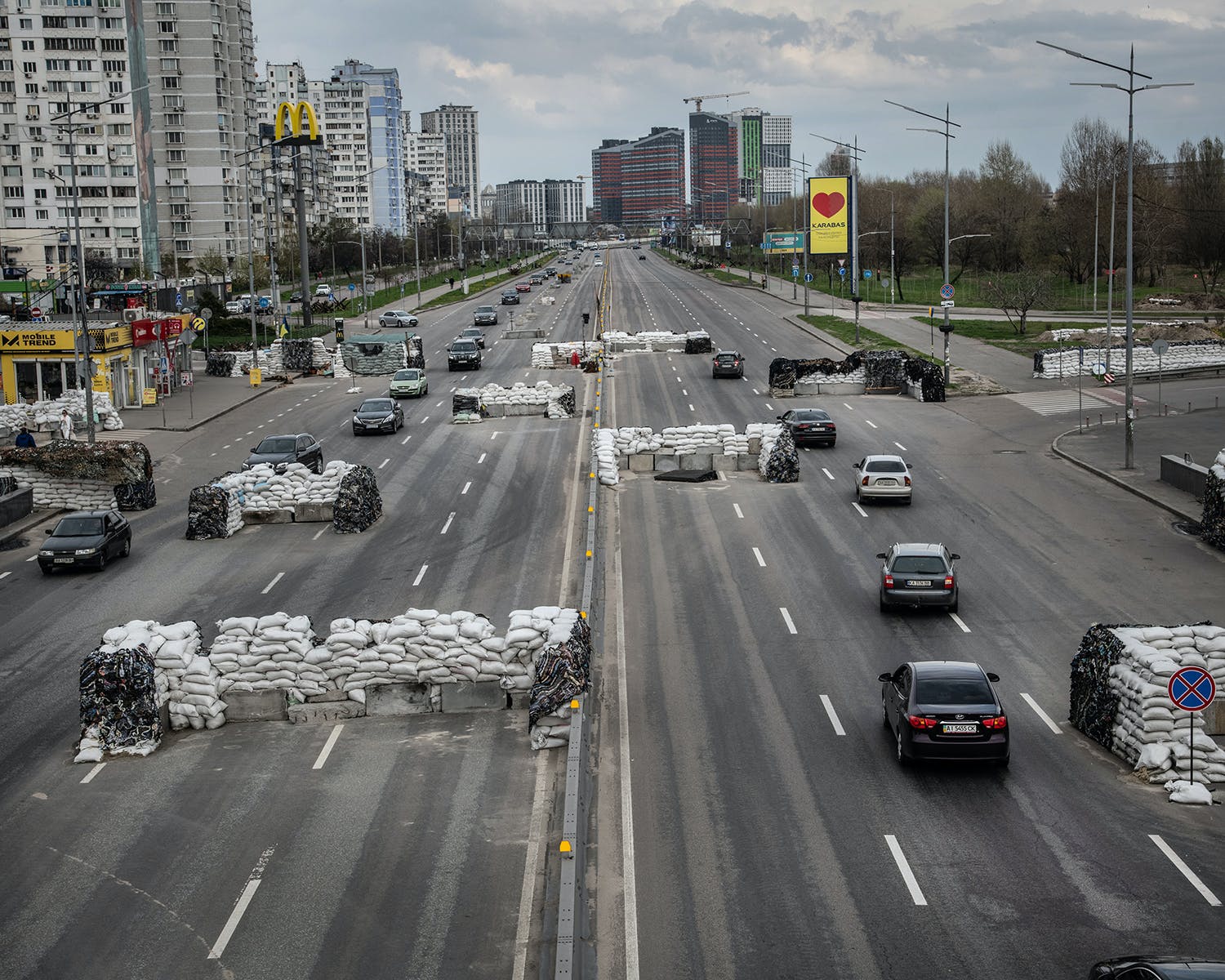 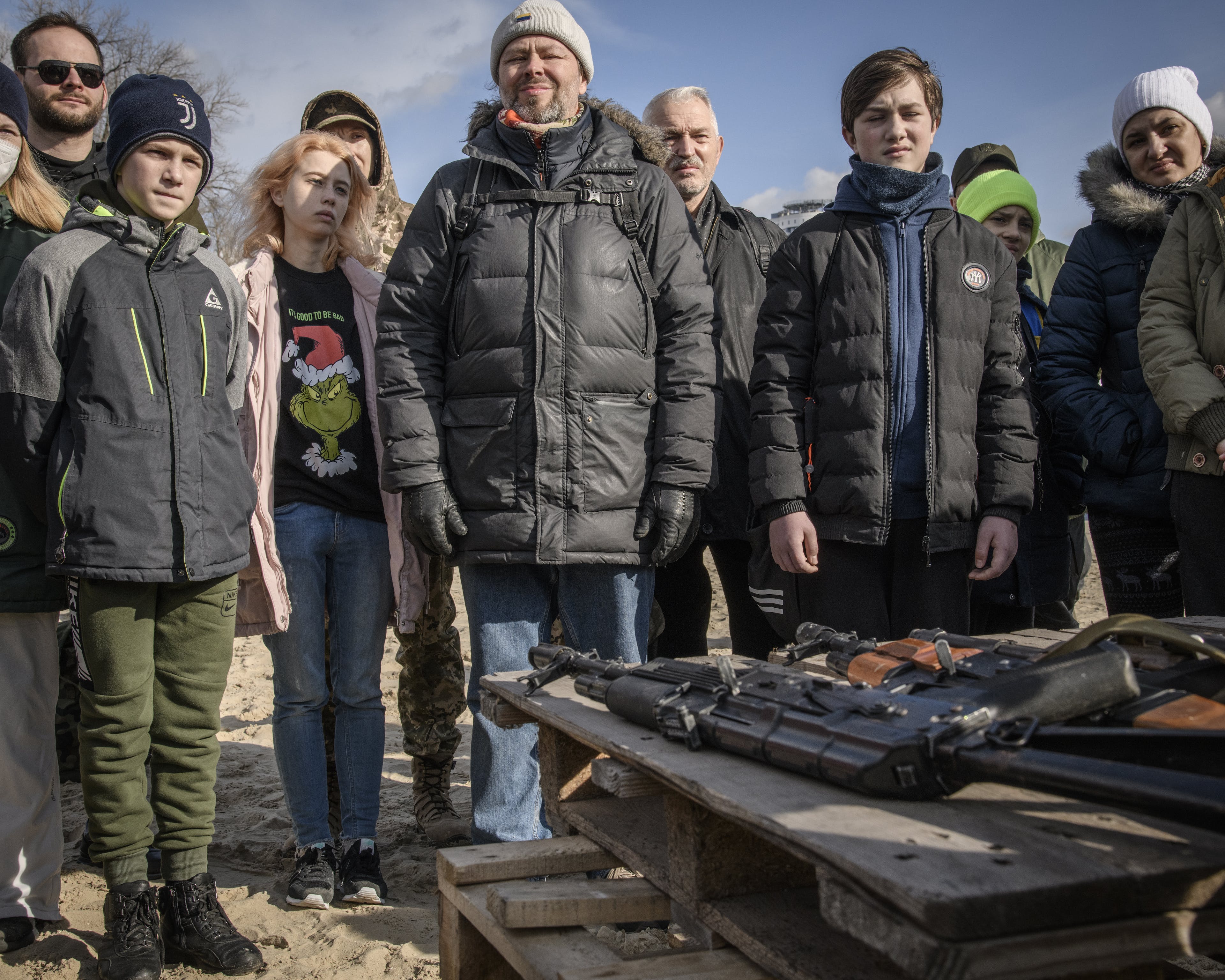 Justyna Mielnikiewicz doesn’t consider herself a war photographer. But said she just happens “to live in a part of the world that Russia occasionally attacks.” The Polish photographer is based in Georgia (which shares a border with Russia). And has covered Ukraine since 2014. She was already in the country when Russia invaded. Immediately, Mielnikiewicz saw people organize aid for refugees and those who’d been displaced — the subjects of some of the images in her photographic essay.

“My series focuses on individual emotions amid the ruins. Ruins in the sense of falling, destroyed buildings. But, also ruins in a sense of the whole structure of life as people knew it falling apart,” she said.

Mielnikiewicz added that she likes to focus on people’s emotions — what she likes to call the “geography of the human face.” Her essay offers a mixture of photos of people rebuilding, protesting, or trying to go about their daily lives despite the devastation surrounding them.

“[I hope] what my work conveys about the people of Ukraine is a sense of dignity. They maintain a resistance,” she said. “Resistance is not only to take a gun and go fight. Resistance is also to continue living, working, and maintaining your family amid the ruins and destruction of the war.”

The war experience from a child’s perspective 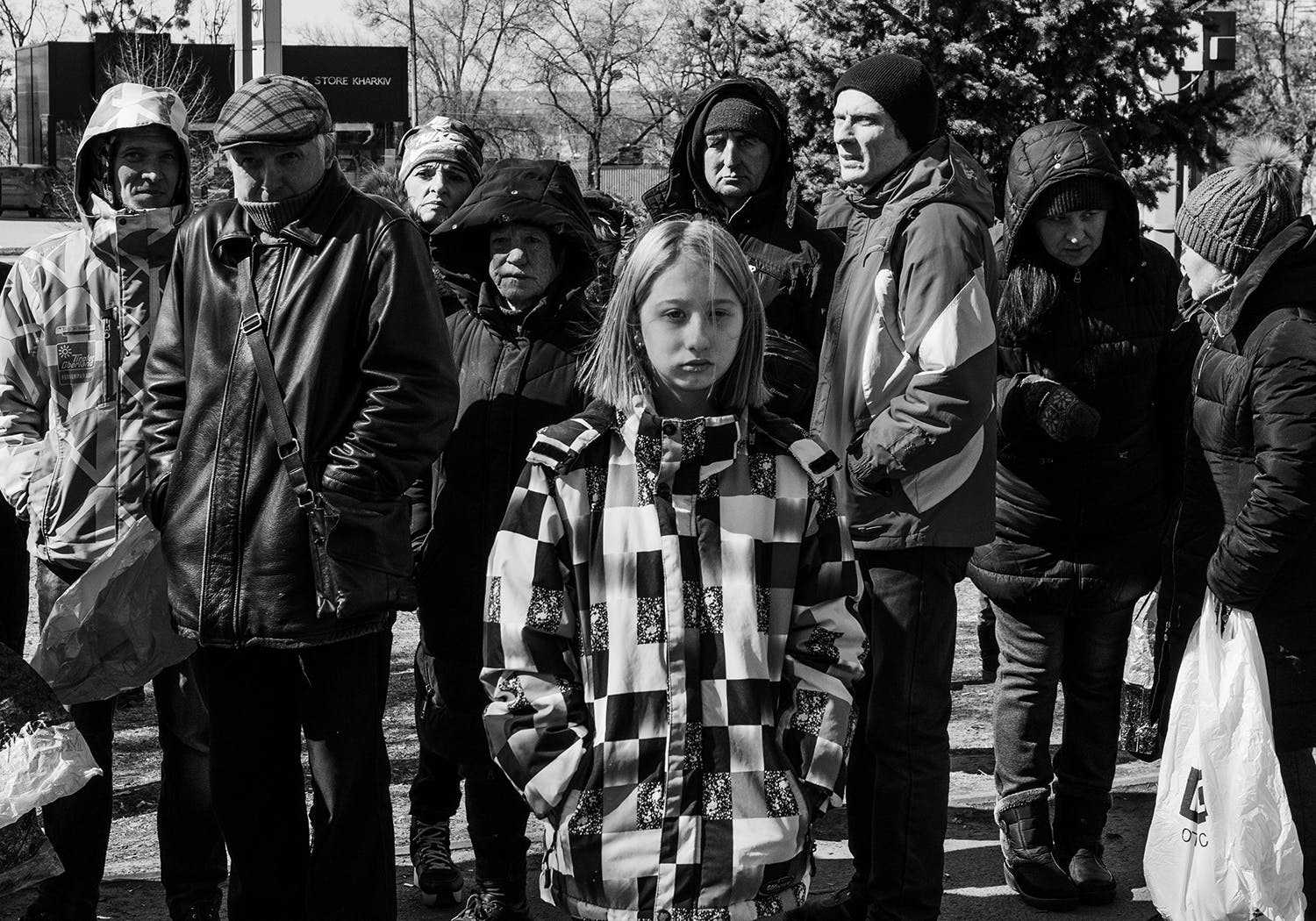 A girl stands in line with others in her community in Kharkiv as they wait to receive daily food rations and supplies | Photo: © 2022 SVET JACQUELINE 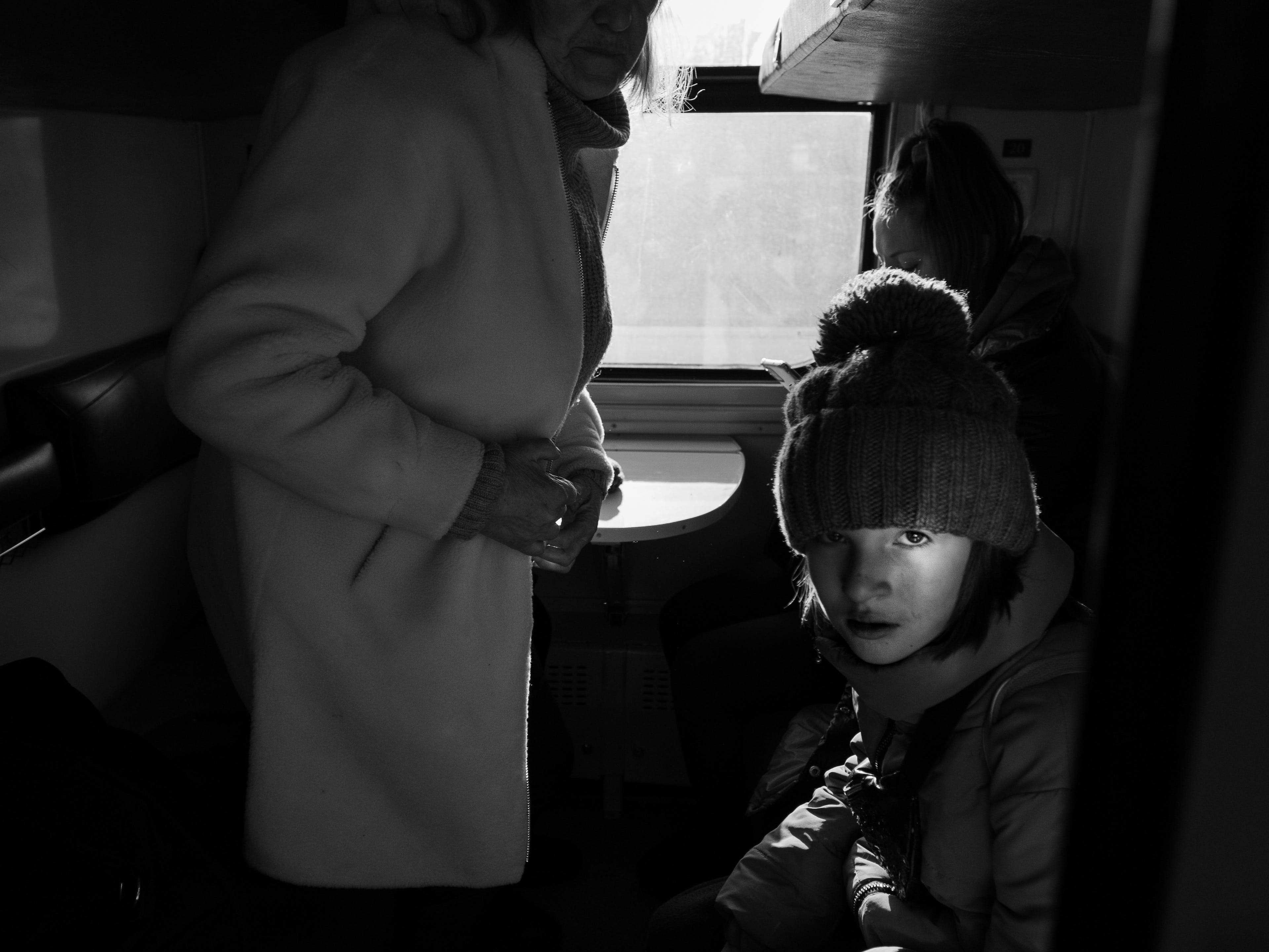 A portrait of a young girl with her family waiting to leave Lviv | Photo: © 2022 SVET JACQUELINE

Svet Jacqueline, who was born into a Russian orphanage, had been watching tensions escalate between Russia and Ukraine from the US. But when the invasion officially unfolded, she knew she wanted to cover it. It would be her first immersive war experience. She took a train into Ukraine from Poland. And that’s when she first saw the scale of the refugee crisis.

“It was so many children, families, and distressed humans who were fighting to get out of this country I had just arrived in,” she said. “I sort of let that be the catalyst to continue telling stories on a deeper level about why they were fleeing, what their lives looked like beforehand, and what a life in Ukraine looks like now if you're not able to leave.”

Jacqueline said her “displaced childhood” has shaped her coverage in Ukraine, which focuses on the most innocent. “Children often don't really understand a conflict when it's happening. They're affected by it, but they also have this beautiful nature of being able to bounce back from things,” she added.

Her black and white photographic essay captures childrens’ moments of joy and playfulness. Including a dance party at a shelter. “It was really late at night and this boy came in and he had balloons,” Jacqueline explained. “He started blowing them up and said he wanted to have a dance party. It was just this really sweet moment.” 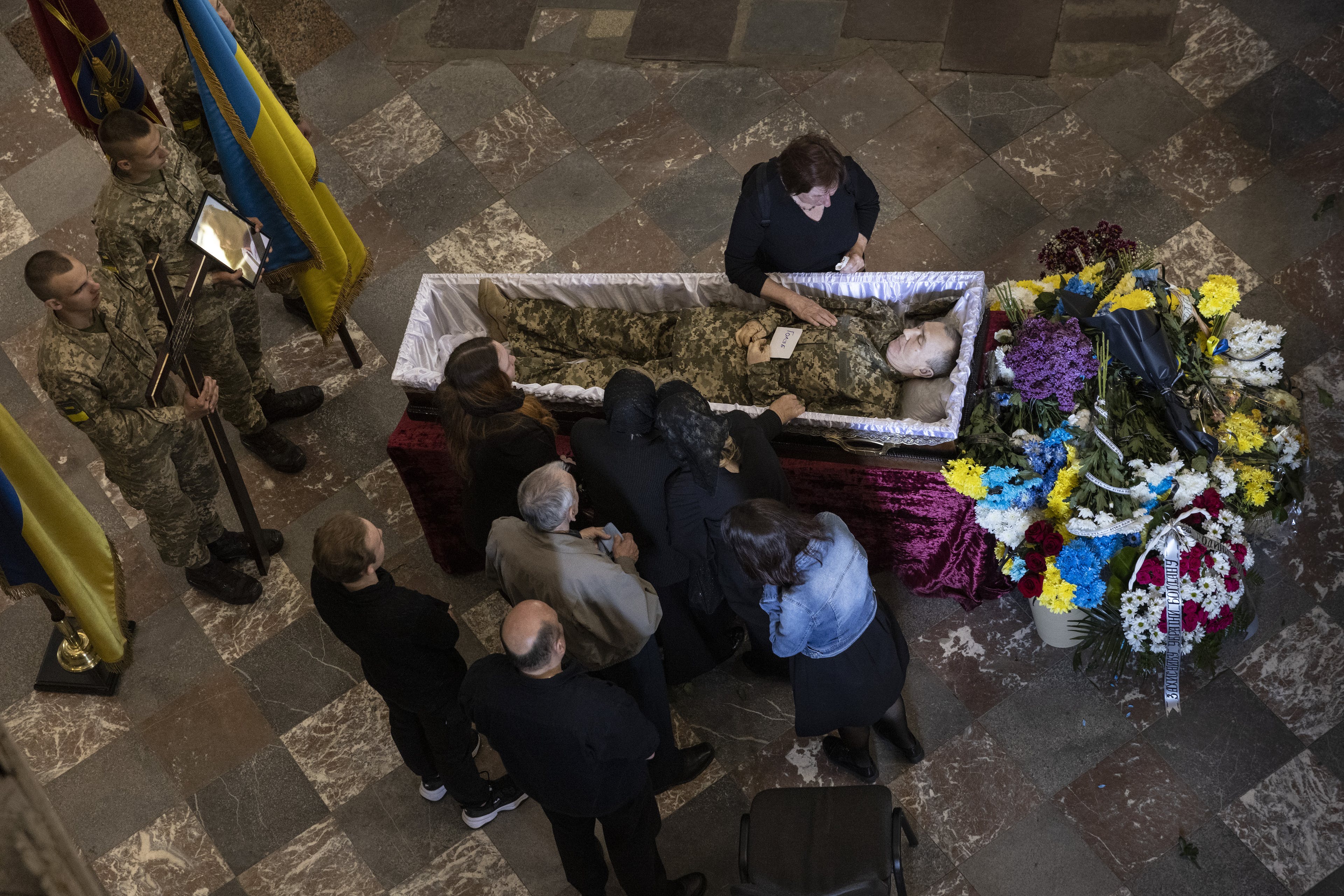 The body of Bogdan Volodymyrovych Holyb, 52, killed in the Luhansk region on May 15th is surrounded by family at a cathedral in Lviv | Photo: © 2022 PAULA BRONSTEIN

Paula Bronstein has worked in Afghanistan, South Sudan, and other war-torn countries. Yet, she said the war in Ukraine is unlike anything she’s experienced. “When the enemy is so unpredictable and outrageous, that's what makes it different for me. I couldn't believe the things I saw, especially in Bucha,” she explained.

Bronstein’s photographic essay includes photographs from funerals, memorials, and images of alleged war crimes in Bucha. They’re difficult to look at, but offer an intimate look at the essay’s theme: death.

“I don't think I ever covered so many funerals,” Bronstein said. “Hearing the Ukrainian national anthem every time and how people would sing it and how proud they are to be Ukrainian. You would just feel and see that, and combined with the emotion of the moment at funerals — I would say a number of times — I got pretty emotional.”

Grief is something you can also feel in Bronstein’s photos. “The loss is just extraordinary because these men weren't soldiers. They had to try to learn it as quickly as possible. Unfortunately, there's a big, heavy toll to pay if they're in the wrong place and time.”

How Ukrainians are moving forward 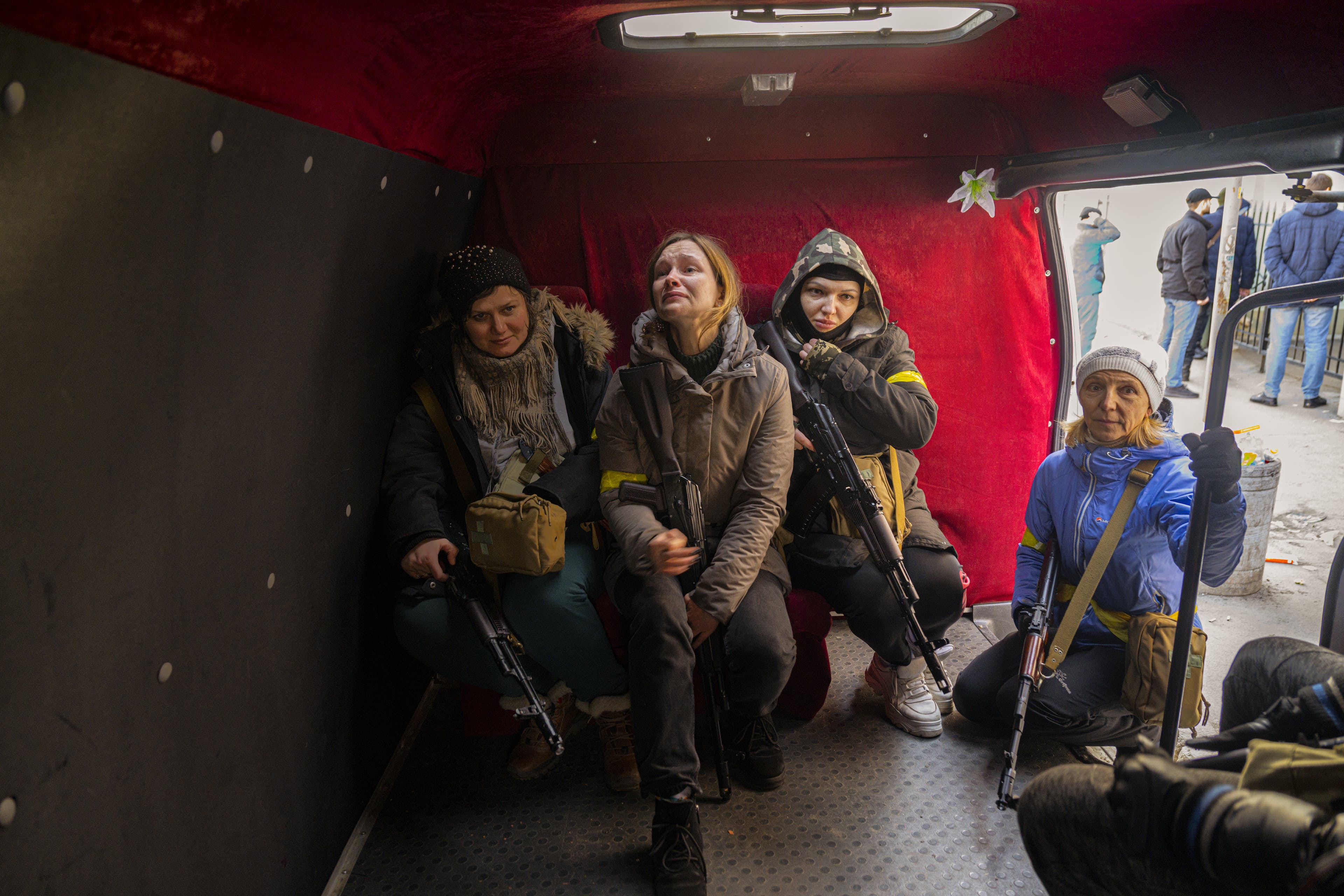 Yulya, 29, a teacher and Ukrainian volunteer, weeps as she waits to be transported to a center for volunteer fighters in Kyiv on February 26, 2022 | Photo: © 2022 LYNSEY ADDARIO

Lynsey Addario was on assignment for the New York Times when it became clear Russia’s escalation had reached a new point. She’s described her days in Ukraine as unpredictable. “You can be in a city that you think is quiet and then because a lot of this war is either long-range missiles or artillery, the frontline is kind of everywhere in Ukraine,” she said.

Addario’s photographic essay focuses on the civilian aspect of war. From women in a maternity ward, to Ukrainian soldiers in the trenches, to people seeking shelter. “I hope that people get a sense of what goes on beyond the frontline,” she said. “How no one is really spared from hardship and having to flee for their lives.”

When asked about how she handles the destruction she sees, Addario doesn’t hide her feelings. “I have years worth of experiences photographing really devastating situations and people at their most vulnerable moments. I feel it very deeply and I think it's important to feel it and to not sort of tuck it away somewhere. I use that to try to motivate me to continue doing this work.”

And she hopes the images and those of her colleagues can be motivating for people who may have cast the war to the sidelines. “With any war and with any story, it's the collective coverage that makes a difference. I think one photographer can't do everything. To me, it's really important to look at the range of work we're all doing and to see we're all playing our own part in bringing the truth to the public.”

Ukraine’s still under attack, it’s not the time to turn away

The war is not over. And while more coverage is imminent, this book shows the effects of Russia's attack on Ukraine so far. The hope is that as people turn the pages of this book, their interest in what's happening to the Ukrainian people is reignited.

“People have a tendency to move on, and I think it's my job as a photographer — and the job of my colleagues — to get people to continue paying attention,” Addario said. “We can only do that if the coverage is powerful and meaningful, if the photos resonate with people, if the stories resonate with people.”

Guzy acknowledged that it was difficult to balance the book since it wasn’t possible to document the Russian side of the war. “This is what I experienced myself as a journalist, what I've witnessed, photographed, and felt about the people in Ukraine and what they're going through,” she said.

And for these photojournalists, photos are the best way to keep the conversation going. “Photography doesn't expire,” Mielnikiewicz said. “It's not like a newspaper that a week [or] a month later, you've already read it. I mean, this is a book you put on your table,” Bronstein added.

How you choose to keep the conversation going is ultimately up to you. As Jacqueline said, “You don't have to do anything you're uncomfortable with. But you should continue discussing the fact that it's happening.”

The Russia-Ukraine war shows no signs of ending. But as the crisis unfolds, these photojournalists are hoping their work will shed light on the true face of war. And especially, on Ukrainians' courage to continue to fight for freedom.