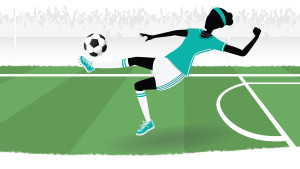 The World Cup is baaaack. Dust off your jerseys.

Kick off is today at 11am ET. Then, plan to see it on at every bar until July 15. There are 64 games in five weeks. You could also watch it on FOX Sports and the FOX Sports app. And Telemundo will have all the games in Spanish.

All. Over. Russia. Think: 12 different cities. It’s the first time the World Cup will be held in Eastern Europe. Moscow, Russia is EST + 7hrs. Here’s a kick(a**) map to show you where it’s all going down.

ISN’T THERE SOME MURKY WATER WITH RUSSIA RIGHT NOW?

Yep. Political tensions are running high between Russia and…the rest of the world. So naturally, there have been some concerns about having the World Cup there. But it looks like Russia sealed the hosting deal by greasing the wheel: it offered FIFA some kickbacks like tax exemptions, and Putin even met with some committee members offline. Nyet exactly fair.

Unless you’ve been living under a rock, you've probably heard about that time Russia attacked the 2016 US presidential election. And the never-ending probe to determine whether Trump's campaign was involved. You may also have heard that Putin was recently re-elected as prez. It wasn’t a very surprising win considering he pushed out all his opponents. So that’s cool.

IS THIS YEAR GOING TO BE BIG?

Looking like it. The 2014 World Cup in Brazil rang in around 3.2 billion viewers. For context: the recent Winter Olympics in Pyeonchang brought in 20 million viewers. And the Super Bowl brought in 103.4 million. So it’s safe to say, the World Cup is one of the world’s most watched sporting events. In case you don't have time to tune in daily, don't sweat. We'll have a recap of games and highlights.

PS: Our app has a ball(er) sports calendar to help you keep track of all the games. Get it here.

HOW DOES IT WORK?

Teams are divided into eight group from A through H. And each group has four teams. The two winners from each group advance to the knockout stage. Then you've got your round of 16, the quarter-finals, and the semifinals. All leading up to (drumroll) the final.

TELL ME MORE ABOUT FIFA.

The Federation Internationale de Football Association is basically the ruler over all things football. But with power comes...bribery scandals (cough, Qatar 2022, cough).

HOW LONG HAS THE WORLD CUP BEEN AROUND?

Since the ‘30s. And it often finds itself in the middle of some political drama. Hitler once tried to use the Cup for Nazi propaganda. Soccer legend Pele's arrival at the tournament ended a civil war in the '60s. The most recent World Cup in Brazil caused violent riots on overspending. So it’s kind of a thing.

The tech. It’s getting an upgrade. Refs will be using a new video system to help them make some of the tough calls like red card incidents and disputed goals. That’s why you’ll be hearing the word VAR (or Virtual Assistant Referees) a lot. Welcome to the future. Oh, and also...expect to see a lot of spoons.

WHO IS THE MASCOT?

Say hiiii to Zabivaka. The word literally means “the one who scores” in Russian. He's a wolf. Who knows why...

Not the US. It lost to Trinidad and Tobago during qualifications. But don't cry just yet – the US, Mexico, and Canada will be joint-hosts of the World Cup in 2026. And host countries usually get an automatic entry. These letters might have helped seal the deal. There are 32 teams from around the world that did make the cut this year. Iceland and Panama are making their World Cup debut. Welcome, welcome.

WHICH TEAMS SHOULD I WATCH?

Here are some to keep an eye on...

Germany and Brazil: The favorites to win this year.

Spain: The 2010 winners. The team appears to be on the right track after a tough 2014 appearance and breaking up with its coach 24 hours before the start of the Cup. Bold move.

France: Currently has the best crop of young players at the tournament.

Iceland and Panama: The newbies.

Egypt: Making an appearance after a 28 year hiatus.

WHO DO I NEED TO KNOW?

Timo Werner is a young one (he’s just pushing 21) but is already making a name for himself after bringing Germany a win in the Confederations Cup in June. You’ll see him leading Germany’s attack as a forward.

Paolo is only 23-years-old. But he's so good, that people are already comparing him to legend Lionel Messi.

Egypt is coming back to the World Cup after 28 years and that’s in part thanks to Salah. He scored five times in six games during the qualifications and will give his team a fighting chance this summer.

The only player on this list to play the position of goalkeeper. Navas is humble and hardworking. He was finalist for The Best FIFA Goalkeeper 2017. He will likely be key to Costa Rica’s success.

Mbappé is only 19 and is already better than most of his predecessors were at his age. He’s expected to help take an already strong French team to the finals.

Neymar. Does he even have a real name? Yes. it’s Neymar da Silva da Santos Junior but who needs it when you're considered one of the best players in the world. So good that Neymar left Barcelona (or Barça) for Paris Saint-Germain for a whopping $500 million and the world went nuts. Now, all eyes are on whether he’ll lead Brazil to win the Cup.

Ronaldo has been one of the most dominant figures in the football world in the past decade. In 2016, he helped Portugal win the Euro Cup – the first major title in the country's history. This is Ronaldo's fourth World Cup. And he's expected to take on the 'captain' title for his team this year.

Messi, who will turn 31 during the games, is one of the most experienced, skilled and determined soccer players out there. He is tied with Ronaldo as one of the most decorated players and plays for FC Barcelona. Watch for his dribbling skills. He's pretty much known for them.

The World Cup is kind of a huge deal. And everyone and their mother will be watching.