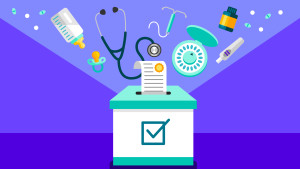 Your health is on the ballot this year.

The next president and his administration will take charge of a whole host of health care decisions that affect Americans—and many of those issues concern women in particular. Such as…

Background: Nearly two thirds of women in the US use some form of contraception. The Affordable Care Act mandated that employers cover birth control costs. But then in 2014, a Supreme Court decision (see: Burwell v Hobby Lobby Stores, Inc) opened the door for employers to opt out on religious grounds.

Background: The US has the highest maternal mortality rate—aka more women die from complications during pregnancy or labor—of any developed nation. This issue also disproportionately affects minorities.

Background: A study of 41 countries found that the US is the only one that doesn’t have national paid parental leave. And child care’s not only expensive, it’s often scarce: half of Americans live in places without licensed childcare providers nearby, or enough slots to provide care for all kids.

Background: The Supreme Court’s Roe v Wade ruling in 1973 protected a woman’s right to an abortion without government restriction through her first trimester. Since then, some states have tried to challenge or weaken that right. They’ve passed laws that ban abortions once a fetal heartbeat is detected (that can happen as early as six weeks). And have required doctors who perform abortions to have admitting privileges at nearby hospitals, claiming it’s for the mother’s safety. Now, President Trump’s nomination of conservative Judge Amy Coney Barrett to the Supreme Court has many wondering whether Roe v Wade could get overturned.

Whether you’re undecided or know exactly who you’re voting for this year, getting informed is an essential part of being a responsible voter. Especially on issues that directly impact you, like women's health.