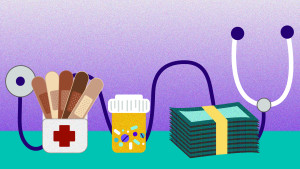 People of color face a disproportionate level of health risk compared to White people in the US.

The US health care system was segregated well into the 20th century—as in, many hospitals and clinics were completely separated by race, or required Black people to use different wings of medical facilities with subpar care. Fast forward to today, and while segregation isn't as explicit, there is still implicit bias that permeates the health care industry. A study found that on average, White Americans spent 80 minutes waiting for or receiving care, while Black Americans spent 99 minutes and Hispanics 105 minutes waiting for that same care. In 2017, 75.4% of White Americans had private health insurance, compared to 55.5% of Black Americans. Lower quality of care combined with a higher rate of health issues creates a system that fails many people of color.

These disparities affect many health issues. We’ve broken down some of the numbers and reasons why there’s such a gap.

What can be done about all of this?

The US can try and turn lip service into legislation. In 2011, the Dept. of Health and Human Services launched an action plan that included things like increasing data collection for minority populations, diversifying the health care workforce, and providing more incentives to physicians to provide quality health care. Now, there’s a bill being discussed that aims to help people of color in the fight against COVID-19. It would require targeted testing, contact tracing, and public awareness campaigns in minority communities. These ideas are on the table—so the biggest way you can make a difference is by voting for policy makers who represent the changes you want to see.

This year has shown, with painful clarity, that systemic racism is alive and well in the US—everywhere from the boardroom to the waiting room. Health care is just one issue that can stand to gain from the nation’s racial reckoning. But fixing a centuries-old system that fails many people of color starts with policy. Here’s your reminder to vote.