Why Gender-Affirming Care Matters — And How To Be an Ally 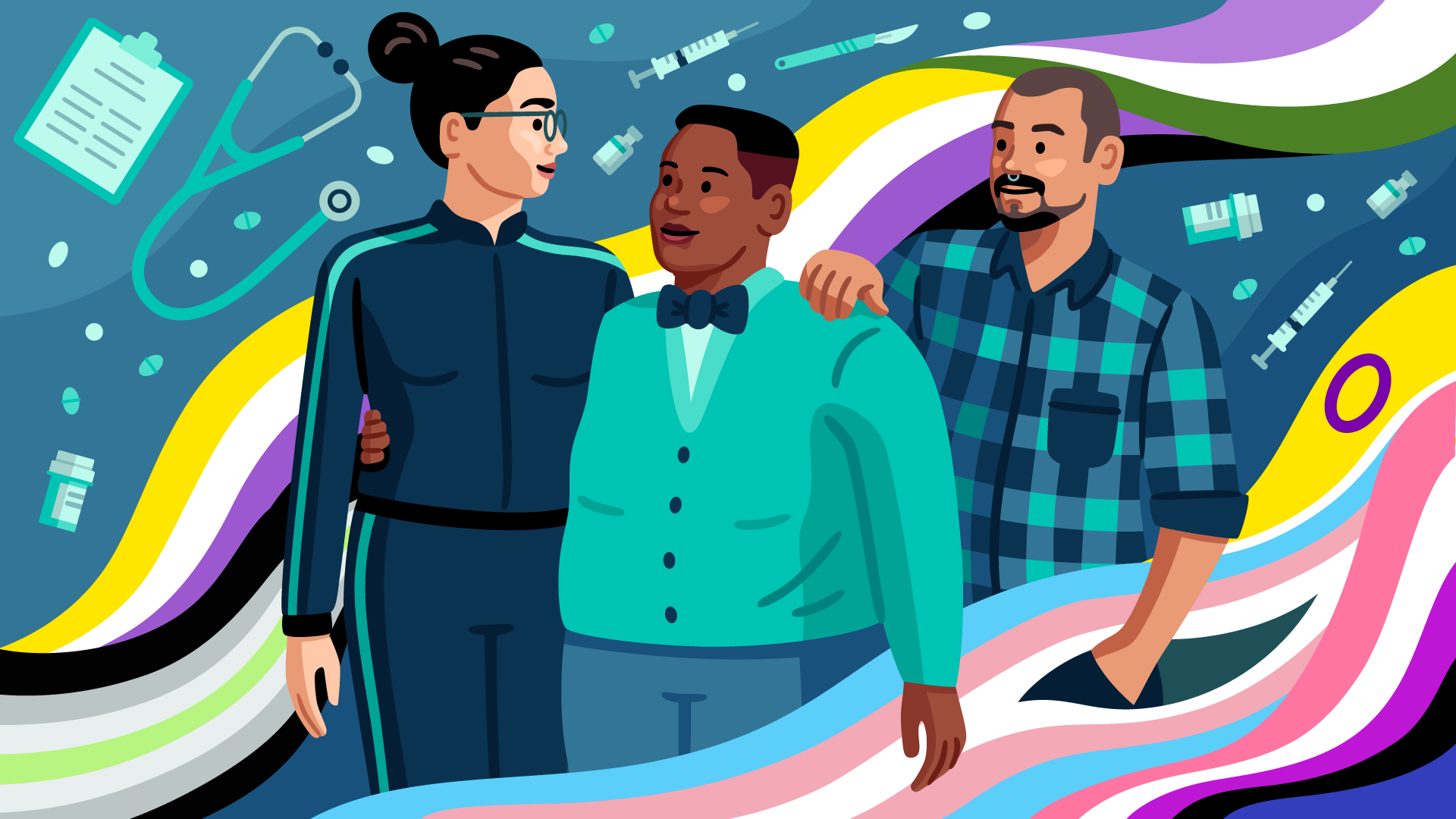 About 5% of American adults under the age of 30 identify as transgender or nonbinary, according to a new Pew survey. But while these groups grow and gain more visibility in the media and among the general public, there’s something happening simultaneously: Certain states are considering — and enacting — laws to limit gender-affirming medical care. Something trans and nonbinary people might seek out to feel more comfortable in their bodies.

Examples of two states looking to block that kind of care: Alabama, where physicians may be charged with a felony for providing gender-affirming care. And Texas, where the AG said gender-affirming treatments should be considered “child abuse” under state law (but a judge partially blocked the order).

So you might have questions. On topics like: what gender-affirming care is, why you’re hearing so much about it, and why it’s important.

To help us Skimm this topic, we called up two experts:

What is gender-affirming care?

It’s a term that describes “a wide range of psychosocial and often medical interventions to help young people and adults feel safe in their identity,” Dr. Busa said. On the psychosocial side, think: access to bathrooms and sports teams that align with a person’s gender identity (rather than their sex assigned at birth), and using their preferred pronouns. On the medical side, that can include: puberty blockers, hormone therapy, mental health services, and surgery — essentially, interventions that allow a person to physically appear the way they identify, and address any related struggles.

What are basic things to know when it comes to gender affirming care? ‘Gender-affirming care’ is the widely accepted term

Not outdated terms like “sex reassignment surgery.” Dr. Busa said to avoid that one  because it implies that someone needs to have surgery as part of their gender identity journey. (And that’s not always the case.)

Not every transgender or nonbinary person desires medical intervention

Reminder: “Transgender” is an umbrella term for people whose gender identity doesn’t match the sex they were assigned at birth. Nonbinary people may or may not see themselves as trans. But, they, too, could potentially seek out the same services, and shouldn’t be left out of the conversation, Dr. Busa said.

Social media posts suggesting that kids as young as 5 could be given hormones to transition went viral last year. But that pushed a false narrative. “We aren’t considering any medical interventions for young people until they are approaching puberty,” Dr. Busa said. Thing to know: The World Professional Association for Transgender Health, which advises on gender-affirming care, recently updated its standards of care. The group declared that hormone treatments could start as early as age 14 (two years earlier than the group previously suggested) and some surgeries could be done at 15 (about a year earlier than it said before).

Break it down for me: What can be involved in gender-affirming medical care?

They’re what they sound like: Medicines that block certain chemical processes to suppress puberty. For transgender boys (who were assigned female at birth), they pause the production of estrogen, blocking the growth of breasts and the start of a period. For transgender females (assigned male at birth), they pause the production of testosterone, stopping the voice from changing and facial hair from growing. This can be an especially important and time-sensitive intervention for a trans or nonbinary person because once “unwanted” secondary sex characteristics develop, they’re irreversible, Dr. Busa said. But if you were to stop taking puberty blockers, puberty for the person’s assigned sex would continue. Overall, “they’re really safe,” she said, but with some known side effects, including hot flashes, headaches, fatigue, and mood swings.

Although a number of trans and gender-noncomforming children understand who they are early on, not everyone feels sure of their gender identity by the time they hit puberty. Those people — and those who took puberty blockers earlier — can take hormones to develop secondary sex characteristics so their appearance can be more consistent with their gender identity.  For someone who identifies as female (but was assigned male at birth), that can mean taking estrogen to help them develop softer skin and fuller breasts. For someone who identifies as male (but assigned female at birth), that can include taking testosterone for a deeper voice and facial hair. The potential to reverse these physical changes depends on how long a person takes hormones. Research suggests that hormone therapy can be safe and effective, but complications can include stroke, infertility, and blood clots.

This can include top surgery (breast augmentation or removal of breast tissue), bottom surgery (like a vaginoplasty or phalloplasty), and facial surgery (to make the face appear more conventionally feminine or masculine). These procedures can require years of wait time: at least a year for a consultation, and then another year before surgery, said Cazares.  As for recovery time, it can take at least a week or two before resuming usual activities after top surgery, depending on whether it was a breast augmentation or mastectomy. And risks are the same as those associated with other surgeries, like blood clots and infection. For bottom surgery, recovery can take upwards of six to eight weeks. And post-up can be particularly painful. Side effects and complications of genital surgery may include numbness, bleeding, and issues with urinating.

What barriers make it hard to access gender-affirming care?

That depends on where you live. But in general, there are some obvious ones and “a lot of unspoken barriers,” Dr. Busa said. They can include: working with a health care provider who isn’t addressing your needs, taking several physical and psychological assessments, and paying huge medical bills that might be excluded from insurance plans. And then there are the explicit laws barring gender-affirming surgery. One recent study found that around half of people in the US who underwent bottom surgery from 2007 to 2019 traveled outside of their home state to get it. And ended up having higher out-of-pocket costs. Even if those laws aren’t being introduced in a patient’s state, Dr. Busa believes these laws can still impact a patient's emotional health. And that the laws could contribute to higher rates of anxiety, and depression in this population. That’s because “the society around them [is] not affirming who they are,” she said.

What do we know about the outcomes of gender-affirming care?

Timely access to gender-affirming hormone therapy decreased suicide risk in LGBTQ+ teens, according to a study published in the Journal of Adolescent Health last year. And a JAMA investigation published this year found that trans and nonbinary young people who received puberty blockers or gender-affirming hormones were 60% less likely to experience moderate or severe depression and 73% less likely to be suicidal after a year when compared to trans and nonbinary youth who had not accessed gender-affirming medication. Thing to know: a 2021 review of studies of individuals who had gender-affirming surgeries found a “regret rate” of 1% or less. Some news outlets continue to focus on issues related to “detransitioning” — a word Dr. Busa finds stigmatizing. But she noted that transition regret is “really rare.”

How can I be an ally?

Dr. Busa and Cazares offered a few tips to get you started:

Get to know trans people…which also means not making them explain everything to you. Instead, “be open to their experiences and make sure you’re saying their affirming name and pronouns,” Dr. Busa said.

Respect boundaries…and avoid asking about medical interventions and names used prior to transition, Dr. Busa said. “They should be in control of that information.”

Know that you’re going to make mistakes…and get comfortable with that, Cazares said.  For example, if you misspeak, instead of profusely apologizing and trying to explain, consider saying, “Thank you for correcting me.”

Laws attempting to limit access to gender-affirming care and articles about transition regret have made headlines lately. But data shows that allowing transgender and nonbinary people access to gender-affirming hormone treatments and surgeries can be important for their mental health and wellbeing. Also important: being an ally and recognizing and respecting people as they are.