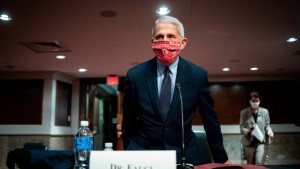 A top CDC official believes there's "way too much virus" across the US to get it under control.

The first known coronavirus case in the US dates back to late January. In February, the CDC began rolling out some tests to local and state health labs. And then in March, the WHO declared COVID-19 a pandemic and President Trump imposed travel restrictions to try to curb the spread. Since then, Americans have struggled to access testing and received mixed messaging about the use of masks. There was also a shortage of PPE, and the economy crumbled.

Today, the US has more cases and deaths than any other country in the world with over 2.5 million known infections and more than 126,000 killed. And while many countries in Europe and Asia seem to have succeeded at flattening the curve, the US has failed. New cases here have reportedly gone up 80% in the last two weeks. Yesterday, Dr. Anthony Fauci warned that daily new infections – which are currently at 40,000 – could soon reach 100,000. And this week, a top CDC official said the numbers show we're still at the beginning of the outbreak and that it was "wishful thinking" to believe the pandemic would be over by summer.

I repeat, how did we get here?

Some health experts and 65% of Americans polled have blamed the gov's slow response to the outbreak including failure to ramp up testing. Some experts say we needed about three times more the amount of testing available before opening, and that the economy may have reopened too quickly. Meanwhile, others are saying 'hey, remember contact tracing...what happened with that?'

There's no clear path. Other than bringing the number of infections down while we wait for a vaccine to roll out...which could take longer than many had hoped. At least 35 states are seeing their numbers increase, and one of them has even halted reopening. But the CDC has said it before and will say it again: wearing a mask, washing your hands, and social distancing will help protect yourself and others.

It's hard to pin the blame of the outbreak on any single person, policy, or social practice. Everyone has a part to play in reducing the spread, especially people in their 20s and 30s, who in recent weeks have been driving up the numbers. But it's clear that the US is failing in addressing COVID-19, and the result is tens of thousands of American lives lost.

What hit the gavel on another ruling...

The Supreme Court. Yesterday, it ruled that religious schools can't be excluded from a Montana funding program. The case made its way to the Supremes after three Montana families challenged their state's decision to scrap a scholarship program for students to attend private schools, including religious schools. At the time, the state's Supreme Court said the program violated its constitution since public funds aren't allowed to go towards religious education. But the families argued the move violated their religious freedom. Chief Justice John Roberts sided with the court's conservatives in the 5-4 decision, saying that religious schools couldn't be singled out and excluded from public funding.

Hong Kong. Today, Hong Kong police arrested at least two people amid pro-democracy protests for violating China's new national security law. Reminder: The law, which went into effect last night, allows China to bypass Hong Kong's local gov and crack down on these types of protests. Demonstrators have taken streets protesting the new rule with some carrying flags and signs calling for Hong Kong's independence but were met by police in riot gear with pepper spray and water cannons. This comes on the territory's 23rd anniversary of when it was handed over to China after more than a century of British rule

Carl Reiner. On Monday, the comedy legend and creator of "The Dick Van Dyke Show" died at the age of 98 from natural causes. "The Dick Van Dyke Show" – based on Reiner's life as a comedy writer – won a total of 14 Emmy Awards. Reiner was also a director and performer and appeared in many movies including the "Ocean's Eleven" franchise. His son, actor and director Rob Reiner, called him his "guiding light." RIP.

NYC. Earlier this week, Mayor Bill de Blasio said the city would end solitary confinement at Rikers Island and its other jails. The move comes after Layleen Polanco, an Afro-Latinx transgender woman, died from a seizure at Rikers last year. Officials had placed her in solitary confinement against medical advice. The changes go into effect immediately for those with underlying medical conditions (like seizures or heart and lung disease). And there are plans to scrap the controversial practice entirely by the fall. LGBTQ+ advocates – who've called for action in Polanco's death – reportedly said the news falls short of justice.

What's taking "Snakes on a Plane" to new heights...