Daily Skimm: Beirut, the US Census, and MC Principal 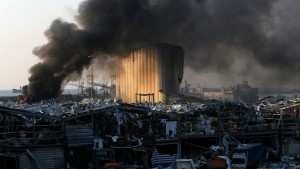 Yesterday, a massive explosion shook the port in Lebanon's capital, killing at least 100 people and injuring more than 4,000 others. It's not clear what caused the initial explosion. But the government says it appears the blast was caused by "highly explosive materials" (read: ammonium nitrate) which had been stored at the port for years. The blast – which could be felt in Cyprus, over 100 miles away – sparked fires, overturned cars, damaged hospitals, and blew out doors and windows. This all comes at a time when Lebanon's already facing a slew of challenges.

Like the rest of the world, it's dealing with the economic and health effects of the coronavirus pandemic. Its economy is on the brink of collapse due to its existing financial crisis that's been made worse by COVID-19. The country's currency has plummeted and many have lost their jobs. Sectarian tensions have also been high as the country awaits a verdict in the killing of former Prime Minister Rafik Hariri in 2005. Four Hezbollah suspects are being tried for Hariri's assassination – and with Hezbollah integrated into Lebanon's government, a guilty verdict could threaten already fragile relationships within Lebanon's political structure.

What's the Lebanese gov doing about this?

It's investigating the deadly blast. Lebanese PM Hassan Diab declared today a national day of mourning and said he "will not relax until we find the responsible party." President Michel Aoun has deployed the military to help. Officials said those responsible will pay a price for what happened but reportedly warned against labeling it as a terrorist attack.

Explosions in Lebanon may bring many in the country back to a very dark time in its history, the 1975-1990 civil war riddled with deadly bombings. For now – while it's unclear how the explosion began and many await answers – the whole country is left in a state of mourning.

What pushed up its due date...

The US Census Bureau. This week, it confirmed it'll stop counting people for the 2020 Census on September 30th – a month earlier than planned. That goes for both self-response options and door-knocking efforts. The bureau said the changes were needed to meet the end-of-year deadline. And that the new plan will "protect the health and safety of the public and our workforce" amid the coronavirus pandemic. But critics say 'seems fishy.' And that this could lead to a serious undercount, leaving out hard-to-count households (think: those who experience homelessness, aren't fluent in English, have little access to the internet, or are undocumented). Which would disproportionately impact immigrants and people of color. They also pointed out that this isn't the first time the Trump admin has pushed for changes to the census that could lead to an undercount of minority districts.

Psst…here's what the updated census deadline could mean for your community, paycheck, budget, and more

These states. Yesterday, Arizona, Kansas, Michigan, Missouri, and Washington held their primary elections. Here are some of the contentious races: In Missouri, progressive Black Lives Matter activist Cori Bush defeated longtime incumbent Rep. William Lacy Clay (D) – who she'd lost to in 2018. In Kansas, Congressman Roger Marshall beat out former Kansas Secretary of State Kris Kobach – giving Republicans a sigh of relief, since many thought a Kobach win could result in a lost Senate seat in November. In Michigan, freshman Democratic Rep. Rashida Tlaib is leading in the battle to keep her seat. But the state faced some voting issues...which could spell trouble for November

Isaias. Yesterday, the tropical storm spawned more than a dozen reported tornadoes along the East Coast, killing at least six people across North Carolina, Maryland, Delaware, Pennsylvania, and New York. Nearly 3 million people were left without power. Isaias is now a post-tropical cyclone and has moved into southeastern Canada

Why Wall Street may be patting itself on the back…

Fortune. The number of women CEOs on the Fortune 500 list is expected to reach a record high: 38. (Yeah...that's a record.) The newest names to be added to the list come September are Sue Y Nabi for Coty and Linda Rendle for Clorox. Bo$$ moves

Who's got a mind to rhyme and two hype feet…