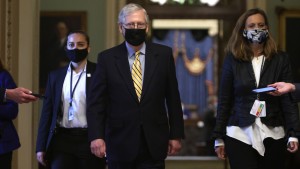 Do Not Pass Go

Say goodbye to yet another coronavirus relief bill.

Yesterday, the Senate failed to pass its $500 billion proposal. The bill – while smaller than the over $2 trillion CARES Act that Congress passed six months ago – would have let some small businesses apply for a second loan under the Paycheck Protection Program. It also would have provided an additional $300/week in unemployment benefits (instead of the previous $600/week under the CARES Act). Plus it included $105 billion to help reopen schools, and would've let the US Postal Service – which has been crippled by the pandemic – off the hook for repaying a $10 billion loan. But yesterday, not a single Democrat voted in favor of it.

They said it didn't go far enough to help Americans. Reminder: the House passed its $3 trillion relief package back in May. It included another round of stimulus checks (up to $1,200 for individuals) – something the Senate didn't include in its bill but President Trump has said he's open to. It also allotted $1 trillion for state, local, and tribal governments and $200 billion in hazard pay for essential workers. But Republicans said 'no thanks,' calling it a "liberal wish list."

It's unclear. Neither party seems to want to budge on what they think should be included in a relief package. While Trump's been singing 'I gotta go my own way' to provide some type of relief, the funds he approved for additional unemployment benefits through an executive order are running out. And Fed Reserve officials have warned Congress that it needs to help Americans financially...or the economy and unemployment numbers could get worse.

Not much has changed since the last stimulus package: the pandemic is still ongoing, jobless numbers are still high, and people still have bills to pay every month. And at this rate, it seems the chance of getting a relief package before the November election is slim to none.

Where alarm bells are still ringing...

The West Coast. California, Oregon, and Washington are still battling more than 100 fires that have killed at least 15 people. State officials (like CA's and OR's governors) have said climate change is causing the record-breaking wildfire season. And experts are saying 'you're not wrong.' They point to extreme weather (like heat waves) that's creating dry conditions, fueling these wildfires. And say this pattern isn't going away anytime soon. This week's episode of "Skimm This" has more on that.

Lebanon. Yesterday, a huge fire broke out in Beirut's port – the same place where a massive explosion (caused by the detonation of nearly 3,000 tons of ammonium nitrate) killed nearly 200 people last month. No one was injured in yesterday's fire, but plumes of black smoke and flames created panic and sent people running to safety. Officials said the fire's been extinguished, and its exact cause is under investigation. But some may be worried that they won't get a straight answer from the gov, which has been accused of mismanagement and has yet to hold anyone accountable for last month's deadly blast.

Microsoft. Yesterday, the tech giant said Russian, Chinese, and Iranian hackers have tried to carry out cyberattacks in an effort to tap into this year's election. And that they each appear to have their targets: China is zeroing in on the Biden campaign and Iran's taking aim at Trump's. Meanwhile, Russia has targeted more than 200 orgs in connection to the election. The report is consistent with recent intel reports on foreign interference in the 2020 election. Microsoft says there's no evidence the hackers have been successful...for now.

What's got people singing 'fly me to the moon'...

NASA. Yesterday, the space agency said it's hiring companies to get down and dirty...as in, collect rocks and dirt from the moon. It's part of NASA's Artemis program – which aims to explore the moon and eventually go to Mars. It could cue up some controversy in the galaxy since no country can claim the moon or planets (see: the Outer Space Treaty). But NASA's saying 'don't go down that black hole,' adding it'll fully comply with the treaty's rules.

The Houston Texans and Kansas City Chiefs. Yesterday, the teams shared a moment of unity in the NFL's first regular season game. Before kickoff, both teams linked arms on the field for a moment of silence "dedicated to the ongoing fight for equality" in the US. But not everyone was on board.

Who's moving up in the big Citi…

Jane Fraser. She's poised to become the first woman to lead a major Wall Street bank when she starts her new role as CEO of Citigroup next year.

Who found their perfect match…