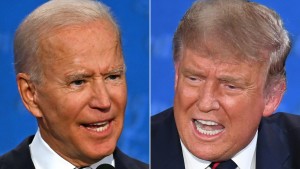 CAN EVERYONE MUTE THEMSELVES, PLEASE

What a night that was.

I assume you're talking about the debate?

What else? Yesterday, President Trump and former VP Joe Biden faced off in the first 2020 presidential debate in Cleveland, OH. And the moderator had a tough job dealing with interruptions (hope you got some sleep, Chris Wallace). But after a plea for the candidates – Trump, specifically – to behave, we somehow got through all the main topics and then some. Here's what they had to say:

On the Supreme Court...Trump made it clear he was sworn in as president for four years, saying it gives him the right to put Judge Amy Coney Barrett on the bench. Biden wants to wait to confirm a new justice since early voting has already started. And pointed to Barrett's previous comments on the Affordable Care Act. The thinking is with her on the court, SCOTUS could dismantle the law – something Biden says we can't afford during a pandemic.

On COVID-19...Biden talked about the families who've lost someone after more than 200,000 people died in the US – and said Trump had no plan to combat the virus. Trump blamed China and said the death toll would be far higher (millions) under a Biden presidency. They talked masks (and Trump showed us his). On a vaccine: Trump's saying it'll be here in weeks. Biden's not that optimistic.

On the economy...Trump says it's on the 'up and up' after the pandemic shut everything down. And that businesses should reopen. But Biden says you can't fix the economy until you fix the coronavirus.

On Trump's tax returns...The president said he paid way more than $750 in federal income taxes in 2016 and 2017 – but he didn't have an exact number. He said "the assets are extremely good" but he won't show proof until his audit's done. (FWIW: The IRS has said he's free to share that info while under audit.) Biden's response: "show us your tax returns." Like he showed his.

On race and violence...There's only one thing to say: the president of the United States refused to condemn white supremacists, instead telling a far-right group to "stand back and stand by." The statement on its own is startling and prompted immediate criticism, especially as hundreds of thousands of Americans have been protesting for racial justice in the country.

On climate change...Trump said he believes humans are responsible for it "to an extent." And blamed poor forest management for the West Coast wildfires. He said he's "OK" with electric cars...despite wanting to roll back tax incentives that could get more of them on the road. Meanwhile, Biden wants to rejoin the Paris Agreement. And said he'd work toward reaching net zero by 2035.

On election integrity...Biden urged people to vote early, by mail, in person – whatever works for them. Trump called 'fraud' on mail-in ballots, specifically in Democratic-led cities and states. (Reminder: evidence shows voter fraud is extremely rare, including when voting by mail.) And said it may lead to not knowing the election results for months.

And everything else...There was more name-calling than at a "Real Housewives" reunion. Trump said "there's nothing smart about" Biden. Biden told him to "shut up, man." Trump criticized Biden's son – again and again. Biden called him "the worst president America has ever had." Trump wants credit for bringing back Big Ten football. Biden doesn't want anyone to inject bleach. And Chris Wallace may never want to moderate a debate ever again.

The first presidential debate came at a time of uncertainty and chaos. And while most people have already decided who they'll vote for, last night's debate left everyone else sifting through a lot of noise. But it was only the first of three Trump-Biden debates. The two get next week off – when VP Mike Pence and Sen. Kamala Harris (D-CA) will take the stage.

Who keeps changing the deadline...

The Census Bureau. Earlier this week, Commerce Secretary Wilbur Ross said the bureau would wrap up the 2020 Census count on October 5th – defying a federal judge's ruling that counting should continue through the end of October. Reminder: There's been an ongoing battle over the once-in-a-decade count of the US population. The Trump admin wanted the census to finish today (instead of the October 31 deadline) to have more time to process all the data. But civil rights groups and local govs argued the shortened timeline would lead to an undercount of minority communities. And last week, a federal judge sided with them. Now, the bureau appears to be saying 'the earlier the better,' and the deadline's changed again – to less than a week from now. But the judge said, 'um, excuse me?' and asked for an explanation.

Psst...Here's why accurate census data matters for your wallet.

Amnesty International. Yesterday, the human rights org stopped its operations in India. The reason? It claims India is retaliating against the org for revealing wrongdoing by Indian officials – including alleged human rights abuses in Kashmir and police misconduct in February's riots in Delhi. Amnesty International says it's faced an "incessant witch-hunt" for years (think: the freezing of its bank accounts, interrogations of its members). The Indian gov's said the claims were "unfortunate, exaggerated, and far from the truth." Now, Amnesty International says it's working to figure out how it can continue to play a part in the country's human rights movement "for years to come."

The Tennessee Titans. Yesterday, the NFL team punted activities for a few days after three players and five personnel tested positive for COVID-19 – the NFL's first outbreak since kicking off the season earlier this month. The Minnesota Vikings, who recently played the Titans, called an audible and hit pause too.

Pantone. It's released a new "Period" color, which it described as "an active and adventurous red hue." The goal is to end the stigma associated with menstruation and embolden all of those who have periods.

Who'll be ruling our on-screen time…

This king and this princess.