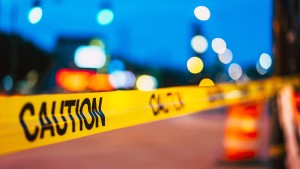 This week, another Black man was shot and killed by police.

On Monday, 27-year-old Walter Wallace Jr was shot and killed in Philadelphia, after police responded to a call about a man armed with a knife. Officers say they ordered Wallace to drop his knife several times but he continued to advance toward them. The two officers retreated then fired at least seven rounds each, hitting him in the chest and shoulder. Wallace was later pronounced dead at a hospital. His mother, who tried to intervene before her son was shot, said Wallace struggled with mental health issues and was on medication. Now, people are demanding answers...and justice.

Wallace's family questioned the officers' use of deadly force, asking why they didn't use a Taser instead of shooting him multiple times. But the police commissioner said the officers involved didn't have Tasers. Others raised questions about why the police didn't try to de-escalate the situation and about how they handle mental health crises. The ACLU of Pennsylvania condemned the shooting, saying "no one was in immediate danger" when the officers shot and killed Wallace. And that the city is overdue to review the "brazenly violent and abusive behavior" of its police department. Meanwhile, many others are also fed up.

Hundreds of people took to the streets of West Philadelphia to protest. Thirty police officers were injured after being struck by things like rocks and bricks, and one officer suffered a broken leg after she was hit by a pickup truck. Many businesses were looted. And dozens of people were arrested. Philadelphia's mayor said the protests showed the "anguish" Black and Brown residents have felt living "their entire lives under systemic racism." He added that the shooting raised "difficult questions that must be answered." Meanwhile, the president of the local police union is urging the public to be patient while authorities investigate. Both officers involved have been taken off street duty while it unfolds.

The push to give voters some (Eau) Clairity is stronger than ever in Wisconsin (a swing state).

Earlier this week, the Supreme Court said 'pass' in a 5-3 vote to extending Wisconsin's deadline to accept and count absentee ballots after Nov 3. Democrats had requested that election ballots received up to six days after Nov 3 still be counted (if they were postmarked by Election Day). But Republicans said 'nah.' And the Supreme Court ultimately sided with the GOP. In a concurring opinion, Justice Brett Kavanaugh said that ballots received after Election Day could raise "suspicions" if they were to change the outcome of the election. Say what now?

Anyway, Sconnies' mail-in ballots must now be received by 8pm on Nov 3. And Democrats are going the whole nine yards (think: calling, texting, flying banners, airing ads) to get an estimated 320,000 outstanding absentee ballots in by then. And they're urging people to skip the mail, and drop off their ballot at secure drop boxes or election clerks' offices.

Why all the stops? President Trump won by less than 23,000 votes there in 2016. So the Democratic Party is doing everything it can to get a Wisconwin.

The Justice Dept. Yesterday, a federal judge denied the DOJ's request to represent President Trump in a defamation lawsuit filed by journalist E Jean Carroll. Back in 2019, Carroll claimed that Trump had raped her at a department store in the '90s. The president denied the allegations, saying he had never met her and that she was using the story as a publicity stunt. Carroll then sued Trump for defamation, alleging that his comments had hurt her reputation and her career. That's when the DOJ stepped in. And said that since Trump responded to the rape allegations in his official role as president, it should act as Trump's defense team. Now, the federal judge is telling the DOJ 'you're dismissed' as this is about the president's personal life, not government business. And is allowing the lawsuit to move forward. The DOJ has not commented on whether it plans to appeal.

Where people are on alert…

Southern California. Firefighters there are battling two new wildfires including one that has reportedly quadrupled in size this week. At least two firefighters have been critically injured. Tens of thousands of residents are under mandatory evacuation orders. Southern California Edison (one of the largest power companies in CA) said its equipment may have started one of the fires. As a precaution, it shut off power to thousands of Californians in the area. And officials say the Santa Ana winds – strong, dry winds that are typical this time of year – could fuel the already fast-spreading fires. Scientists also believe that a key culprit behind these 'mega' fires is climate change.

Who's learned his fate…

Keith Raniere. Yesterday, the leader of Nxivm – a self-help org that prosecutors labeled a criminal enterprise – was sentenced to 120 years in prison. Last year, Raniere was convicted of various crimes including sex trafficking and sexual exploitation. The New York Times had previously exposed that women in an inner circle of Nxivm (pronounced "nexium") were treated as sex slaves – forced to have sex with Raniere and branded with his initials on their pelvises. Fifteen of his victims delivered statements during his sentencing, describing how he terrorized and traumatized them. Despite all that, Raniere still maintained his innocence.

Susan B Anthony's headstone. Since 2016, thousands of people have left "I Voted" stickers on the women's suffrage leader's resting place. But the moving tribute had one problem: the stickers' glue was damaging the headstone. The fix: a plastic cover to protect it, all while keeping the tradition going.

The Los Angeles Dodgers. Yesterday, the team beat the Tampa Bay Rays in Game 6 of the World Series to take the championship title. It is their seventh title in franchise history and the first since 1988.