Daily Skimm: Return of the Bitcoin, Google's on Defense, and an Overeager Boyfriend 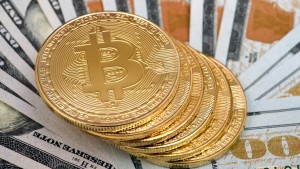 Bitcoin is back, bébé.

You'd think. The cryptocurrency (read: digital currency) started back in 2009. But unlike other currencies, it's decentralized. Meaning, it's not controlled by banks or the government. You can buy it, sell it, trade it, or even mine it. Transactions happen through a peer-to-peer network. Its value is volatile and can change from hundreds to thousands of dollars in a matter of a week. Three years ago, the currency nearly reached a $20,000 record. A year later, it fell to just a few thousand dollars. Now, bitcoin's surging again.

Yesterday, the value of one bitcoin rose above $20,000 for the first time ever. And today, it hit a new high of more than $23,000. The pandemic may have something to do with those new records. In times of uncertainty, some people look for different ways to store their money (could be in gold or silver or...bitcoin) and investors look for different assets. In areas like Africa and Venezuela, cryptocurrencies have served as a silver lining – reportedly helping locals avoid going through a banking system or government with high inflation in order to run their businesses. In Iran, cryptocurrencies may have allowed people to bypass US sanctions. Amid the pandemic, bitcoin has benefitted in part from low interest rates. One analyst says bitcoin's value could reach $55,000 by the end of next year.

Should I get some? Should I sell?

If only we knew. Bitcoin is still pretty new, and it hasn't done as well as more traditional forms of investing (think: stocks and bonds) – unless you hopped on before the 2017 surge. Some businesses have been accepting bitcoin for years (hi, Overstock.com, Expedia, Square, and more). And experts think other cryptocurrencies (Litecoin, Ethereum) could continue to become more mainstream. But while some crypto fans may think its new price tag proves it's legit, financial advisors say people need to understand the risks (little to no regulation, hacking).

There's still a lot we don't know about the long-term value of bitcoin and cryptocurrency. But amid a struggling economy, digital currencies have been looking more attractive.

Psst...if the stock market's more your speed, we break down how to start investing in four steps.

Texas. Yesterday, the state filed an antitrust lawsuit against the tech giant for allegedly using its "monopolistic power." Rawr. State AG Ken Paxton (R) – who seems to be everywhere these days – claims that Google's been squashing competition to control the online advertising market and reap the profits. He's taking the "Goliath" to court and warning it not to "mess with Texas." And Paxton won't be a Lone Star on this one: nine other states joined the suit. Google called the claims meritless, saying 'sorry not sorry' for its "state-of-the-art" ad tech services. It's not the only antitrust lawsuit Google's facing – the Justice Dept filed one in October. And bipartisan AGs are looking to add another suit against the company. Aw, Sheets.

The Pfizer vaccine. Yesterday, the FDA gave health care workers the green light to use leftovers they find in vials of Pfizer-BioNTech's COVID-19 vaccine. Since the distribution of the vaccine earlier this week, pharmacists have noticed that vials contained more than five doses. And some have been able to squeeze out a sixth or seventh dose. Manufacturers reportedly overfill vials to safeguard against spills or other waste. But the extra doses set off confusion among health care workers about what to do with the leftovers. Without clear guidance, some of the extras were thrown away. Now, the FDA's saying every obtainable dose counts "given the public health emergency." But it's warning health care workers not to pool leftovers from multiple vials to create a full dose. The new guidance has the potential to expand the US's limited vaccine supply by up to 40%. And came as the country has reported new records in COVID-19 cases, hospitalizations, and deaths.

Where people are getting closure…

France. Yesterday, a court convicted the accomplices of the men who attacked the French satirical magazine Charlie Hebdo. Following the publication of controversial cartoons of the Prophet Muhammad, two Islamist assailants entered the magazine's Paris offices in 2015 and gunned down 12 people. Their accomplice later killed a policewoman and four others at a kosher supermarket. The three attackers were killed in confrontations with police. And al-Qaeda took credit for the attack. Now, 14 people have been found guilty on charges ranging from membership of a criminal network to complicity in the attacks. Paris Mayor Anne Hidalgo said "justice was served."

MLB. Yesterday, it said it's elevating seven Negro Leagues to major league status. From 1920 to 1948, Black players were barred from joining the segregated National and American Leagues so they played in a separate league. It dissolved a year after Jackie Robinson became MLB's first Black player for the Brooklyn Dodgers. Now, 100 years after the Negro Leagues' establishment, MLB's "correcting a longtime oversight in the game's history." And it'll add records and statistics of over 3,400 players to the record books. The move's being applauded by historians and those with ties to the league.

Where love's got bounds…