After You're Gone: The European Union Post-Brexit | theSkimm
Subscribe

After You're Gone: The European Union Post-Brexit 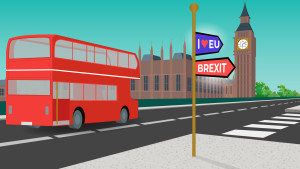 Keep it together: Hundreds of thousands of Brits flooded the streets of London over the weekend, calling for a new Brexit referendum. More than 5.3 million people have signed a petition asking the British parliament to reconsider its plan to leave the European Union.

Nearly three years ago, the United Kingdom said “we’re through”  to the European Union and ever since has been promising "we are never, ever, ever getting back together". But that’s easier said than done. The UK parliament has had a handful of votes on Brexit in the past few weeks: from the actual meat of the deal to whether they even need a deal to whether they need a deal now. Last week, the European Parliament gave them a flextension - but said if British lawmakers can’t agree on the deal, the UK needs to be out of the house by April 12th. That’s the cutoff date for the UK to decide if it will take part in the European Parliament elections in May. British PM Theresa May is fighting for her deal - and her job - this week.

Before it was a divorce … there was flirting. A courtship. And a marriage.

The European Economic Community was born in 1957 to bring the continent together after World War II. It became the European Union in 1993. There are a few big membership perks:

To get those perks, members have to be willing to contribute a certain amount of money to the communal pot.

The UK was rejected from the fledgling Union twice back in the day. Its economy wasn’t doing so hot back then. Eventually the UK got the bid to join in 1973, along with Denmark and Ireland.

But now that there are 28 countries in the EU, things have changed. The UK felt like it wasn’t jiving with the other countries. It thought it was giving too much money and not getting enough out of the deal. It put EU membership to a vote, and a little more than half said 'let's get out of here.'

Why that’s a big deal

We hear a lot about the UK's cost/benefit analysis for Brexit, but we don't hear much about how the EU is going to be affected.

Bad news first: Brexit will hit the EU hard - in the wallet.

The UK pays for 13.5 percent of the EU's budget (the equivalent of more than $21 billion), so the E-U’s gonna have to rethink its spending without that cash. The UK also accounts for 15 percent of the EU's total production value from goods and services (aka the GDP, or gross domestic product).

And there will also be some empty seats at the table. The Brits make up about 10 percent of the European Parliament so the political ideology of the representative body could change. What that shift will look like is still unclear. But the UK is leaving big shoes to fill.

But there's good news, too, and especially in terms of the EU’s future growth: Since the global financial recession in 2008, the UK's debt has grown more than other countries’ debt. That has translated to a slightly increased debt for the EU, and has been a bit of a drag on the EU. Also, Other country’s economies have been growing faster than the UK's. So they won’t be needing the UK’s help to stimulate their economies and prevent unemployment.

The US is going to feel the effects of Brexit, too. The US and UK have a ‘special relationship’ that might change how the US interacts with EU countries - Americans might have to pay for travel visas, and they might not trade with the EU as much.

Brexit isn’t just affecting people inside the UK – the whole EU is hanging in the balance as the UK tries to figure out what it’s doing. There are pros and cons for the EU in all of this. The biggest thing to know, though, is that nobody really knows what’s going to happen to the EU after Brexit. There’ll be a new power dynamic that could affect jobs, trade, and more, and it may take awhile for the Union to find its groove again.