Everything to know about migrant caravans and the asylum process 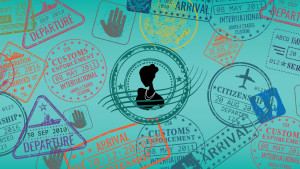 This week, we asked theSkimm app subscribers what they wanted to know about the most recent migrant crisis. Now, we have a lot of answers. Here you go...

What is the crisis?

The most recent migrant caravan you’ve been hearing about started in mid-October in Honduras. Roughly a few hundred people met at a bus station to start making the trek to the US-Mexico border. The goal: claim asylum in the US. The caravan eventually grew to include an estimated 7,000 people, the largest in years. Thousands have reached the border city of Tijuana, where they’re staying in shelters. There’s a wait list to start the asylum process. And the US says it can process fewer than 100 claims a day. Cue rising tension and lots of frustration.

Over the weekend, things escalated when migrants in Tijuana protested against the slow asylum process. Hundreds tried to run across the border – US officials said some of them were throwing rocks. Border agents used tear gas on the crowd, which included kids. You’ve seen the pictures. Critics said ‘whoa too far.’ The US gov defended the move, saying it was in the interest of public safety. BTW, it is illegal to use tear gas in warfare but ok for riot control.

Where are the migrants coming from?

Mostly from an area called the Northern Triangle: Honduras, Guatemala, and El Salvador. These countries are known for poverty and high levels of violence...two main reasons people flee to the US.

Give me the demographic breakdown.

]Most are adult men. But there are also many women and children. President Trump claims that the caravan includes hundreds of criminals and gang members. He hasn’t given any evidence of this.

Who paid for their travel?

The group has been traveling by foot or catching rides along the way. They’ve mostly been getting help (like food, water, and shelter) thanks to local officials, residents, and orgs like churches and non-profits.

Which border entry points are they at or heading to?

Most are in Tijuana, along the border with San Diego. This is the busiest entry point into the US.

How many people are trying to seek asylum?

More than 5,000 people are in Tijuana waiting to start the process. Wait times could last months. Some have decided to head back to their home countries instead.

Where are the migrants staying while they wait for asylum?

Right now, they’re in a sports complex in Tijuana. The mayor there has called the whole situation a humanitarian crisis. There are lines for food. People sleeping in tents. The shelter is over capacity. Officials in the city need more federal money to be able to open another shelter for more migrants on their way.

How often do these caravans happen?

This isn’t a new thing. Migrants have been forming caravans for years, often because there’s safety in numbers. Most recently, back in March, a smaller caravan (about 1,500 people) started making its way to the US. You heard about it because of Trump’s tweets. And because of the “zero tolerance” policy that followed. The one that led to separating families at the border. After a LOT of dirty looks, the Trump admin walked back that policy.

Wait, what’s the latest on that?

More than 2,500 kids were separated from their parents before the Trump admin rolled back the policy. Most of them have been reunited. There are 47 still in custody. 33 of those kids’ parents have been deported. Those kids reportedly could be adopted.

So for those trying to get asylum, what's the process?

Asylum: protection given to non-citizens. Asylum-seekers are looking for protection from violence or persecution for things like their race or religion at home. But it’s a temporary status. You apply for asylum, then the gov has to look at your application. If you get the stamp of approval, then you’re considered a refugee. There are two ways to get asylum. There’s affirmative asylum, which applies to people who are legally in the US or looking for asylum at a port of entry. Then there’s defensive asylum, aka the kind of asylum people apply for if they're caught in the US illegally.

What proof do asylum seekers need to provide?

Enter: paperwork. As in 12 pages of questions and 14 pages of instructions. People have to give “detailed and specific” info on why they fear persecution, and even include the dates of events that made them feel that way. If they’re applying with a spouse and/or with kids, they have to hand over more info (including pics).

What happens to those that don’t get asylum?

It’s complicated. If an asylum app is denied and they’re in the country illegally, the case is referred to immigration court. Migrants go in front of a judge and can present more details to help their case (think: calling on witnesses, giving testimony). If a claim is denied and appeals don’t work, the migrant will be deported. If they’re in the country legally, they get a second chance to explain why they should get asylum and give more evidence. If it’s still denied, people could reapply, but would need to prove that circumstances have changed back in their home country.

What happens to those that do get asylum?

They’re allowed to work in the US and can get a Social Security card. After one year in the country, they can apply for a green card.

How long is the process supposed to take?

The gov says an initial interview should take place within 45 days of the application being filed. And a decision should be made on the app within 180 days. Key word: should.

How has the asylum process changed under Trump? What’s his admin’s justification?

Foreigners have the right to apply for asylum once they set foot on US soil. Current policy is to let migrants stay in the US while their asylum claims are processed. Trump is not a fan of this, saying it makes it too easy for migrants to skip court dates and go MIA. He wants to strike a deal with Mexico to have the migrants stay there while the US handles their asylum claims. Mexico says nothing’s official. Meanwhile, the Trump admin tried to automatically deny asylum claims by migrants caught crossing illegally. But a judge said 'can't do that' and scheduled another hearing on the matter for next month. Stay tuned.

Does Congress get any say in how this is handled?

Depends. Trump has threatened to cut off aid to Central American countries for letting the caravans form in the first place. Congress would have to sign off on that. Trump has also threatened to shut down the entire southern border...

Is that legal? Is there precedent?

In 1985, President Ronald Reagan temporarily closed ports of entry along the border, after the kidnapping of a DEA agent in Mexico. President George W Bush also partially closed the southern border after 9/11. Trump could close ports of entry. It’s unclear if or how he could close the entire border, which would require a lot of staffing and throw a huge wrench in trade.

Are there international regulations around asylum?

Yes. There’s an international protocol that requires member countries to allow people who fear persecution at home to apply for protection.