2020 Presidential Election Explainer: Here’s Everything You Need to Know 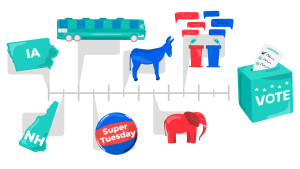 The patriotic brick road to the White House is a long one. Here’s everything that happens along the way.

Primary campaigns: The part where people say ‘you know what, I think I’ll run for president.’ 2020 candidates started entering the race as far back as July 2017. Since then, they’ve been on the road, hitting the debate stage, and rolling out policies on everything from health care to climate change.

The Details: There were six Democratic primary debates in 2019, and there are six more in 2020. The Republican National Committee, on the other hand, is positive President Trump’s their man and hasn’t held any primary debates with the other GOP candidates.

Primary voting begins: The part where voters decide who should be their party’s nominee.

The Details: Voting at this stage occurs in two formats: primaries and caucuses. To get the party nomination, candidates need to win a majority of their party’s delegates. For the Dems that’s at least 1,885 and for the GOP it’s 1,276. Delegates are awarded based on how candidates do in the primaries. This is also the stage where candidates start dropping (out) like flies.

A number of states' Republican parties have canceled their nominating contests, which is seen as a sign of support for Trump. It's not an unusual move when either party’s incumbent seeks a second term.

Related: Need help figuring out who to vote for? Check out our candidate guides here.

Here are some of the key dates to have on your radar. Note: this isn’t a complete list of every primary or caucus happening in 2020.

Related: Don't know what caucuses are? Confused about delegates? We explain it all over here.

The Details: Each party has their own convention rules but they look pretty similar from the outside. Think: lots of party supporters in their best red, white, and blue, speeches, TV crews, balloons. Oh and thousands of delegates voting for a nominee. To win a party’s nomination, a candidate typically needs a simple majority of delegate votes. Spoiler: the primary system means everyone pretty much knows who the nominees will be at this point. It wasn’t always like this. But now the conventions are basically a sales pitch to the American people, with a focus on unifying the party heading into the general election.

The Details: To elect a president, the US uses the Electoral College. There are 538 electoral votes total. Each state gets a certain number based on the number of lawmakers it has in Congress (in both the House and Senate). To become president, a candidate needs 270 electoral votes.

To get to 270, it goes a little something like this: on Election Day, you cast your ballot. In most states, the candidate with the most votes gets all of that state’s electoral votes (vs awarding electoral votes proportionally). Meaning even if a winning candidate, say in New York, only gets 51% of the popular vote, they get 100% of the state’s 29 electoral votes.

Time to head to the polls and cast your vote. It’s always the first Tuesday (after the first Monday) in November. And depending on your state, you can vote early or absentee.

Related: Get to know the 2020 candidates and the main issues driving this election.