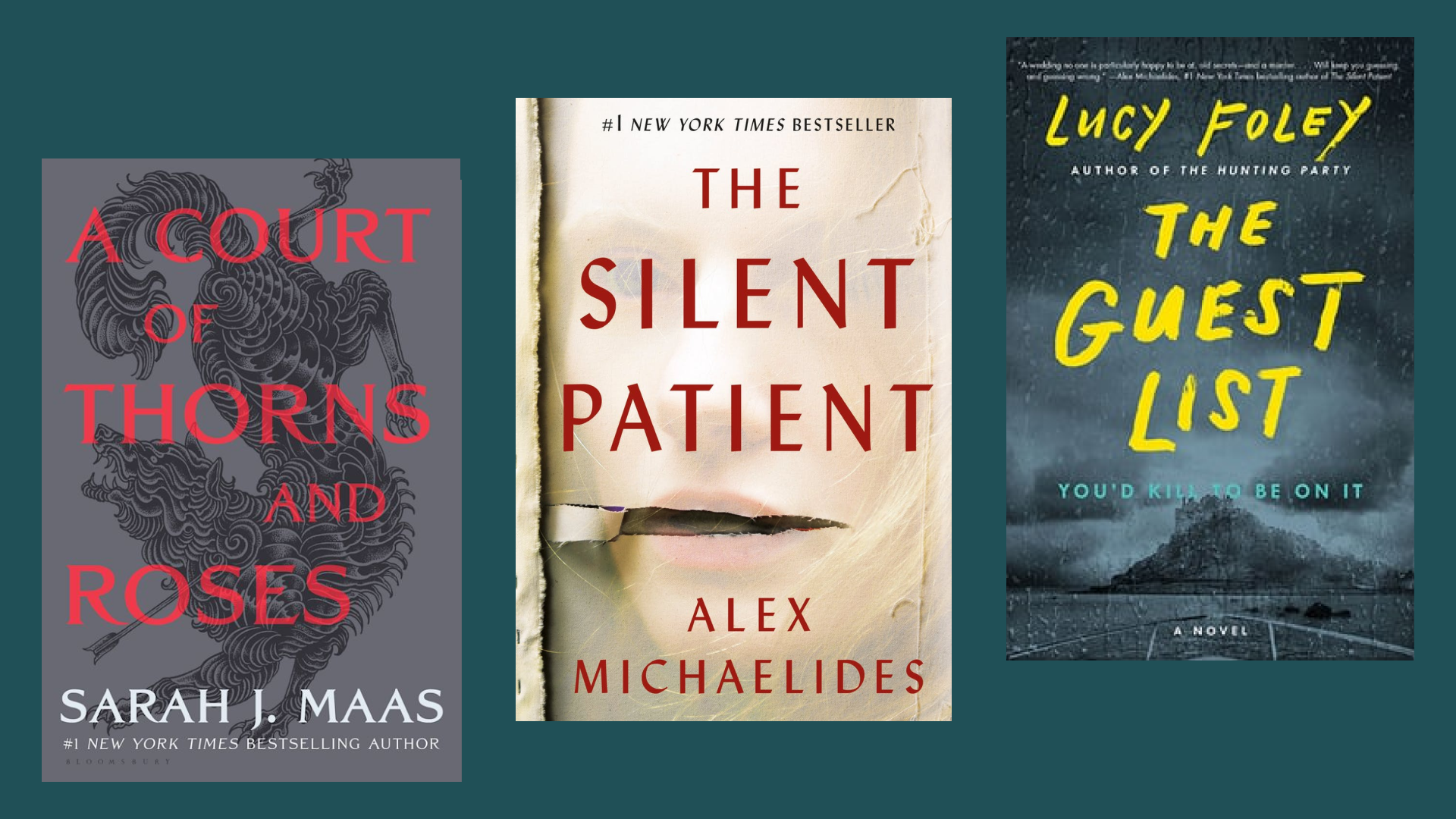 It started out as one HQ’r looking for a page-turner to spend the weekend with. (And yes, they’d already read “Gone Girl” and all the Liane Moriarty titles.) Then the recs started pouring in. We’re talking the books you read in a single sitting, the ones you stay up past your bedtime to get lost in and insist all your friends read once you finish. So we’re sharing some of our favorite can’t-put-down books — old and new. We’ve got a riveting memoir, an irresistible romance, a fantasy series you won’t be able to get out of your head, and of course, some thrillers. Cancel all your plans, because once you start, you’re going to have to finish.

Talk about a word-of-mouth of page-turner we’re still not over. A friend made us read this romance slash thriller. Then we made another friend read it. Then that friend made someone else read it. And now we’re telling you to read it. Hoover, who also wrote one of our fave books “It Ends With Us”, centered this one on a struggling writer who accepts a job from the husband of a bestselling author named Verity. He tasks his new hire with completing the remaining books in a book series his injured wife is unable to complete. But when she starts looking through Verity’s notes...what she finds is completely disturbing. Cue the seductive mystery that has one of our all-time fave twists. Run, don’t walk. (Amazon, Apple Books, Bookshop)

“The Idea of You” by Robinne Lee

Romance > all other genres. (There, we said it.) This 2017 sleeper hit follows a 39-year-old sophisticated, divorced mother who starts a hot and heavy relationship with a boy band member half her age. He’s essentially a not-so-thinly veiled Harry Styles. And naturally, things get messy and super steamy — don’t say we didn’t warn you. It’s not a classic romance novel; it’s a cool (and smart) take on a romance novel that you’ll be thinking about long after you’ve finished it. Plus the characters' chemistry is off the charts. Let’s get it on. (Amazon, Apple Books, Bookshop)

Sometimes the most addictive reads are the ones that make you want to melt into a puddle of tears. In this 2016 meditative bestseller (published posthumously) a 36-year-old neurosurgeon gets diagnosed with stage 4 lung cancer. The manuscript beautifully and devastatingly covers his coming to terms with the diagnosis and contemplating choices like whether or not he and his wife should try to have a child, knowing there was only a finite amount of time left. One New York Times reviewer put it perfectly: “I guarantee that finishing this book and then forgetting about it is simply not an option.” We agree. And we have a feeling you will too. (Amazon, Apple Books, Bookshop)

The last thing you want at a wedding is an uninvited guest. What about a storm that keeps everyone trapped? Or a dead body? In this buzzy 2020 fictional thriller, the perfect couple is set to marry off the coast of Ireland. Everyone in their inner circle is keeping secrets, and you’ll be guessing who ends up dead — and why — with each and every page. (Amazon, Apple Books, Bookshop)

“The Seven Husbands of Evelyn Hugo” by Taylor Jenkins Reid

Our love for TJR (of “Daisy Jones & the Six” and “Malibu Rising” fame) started back in 2017 with this novel. It follows a now-reclusive 1960s movie icon (ahem, the Evelyn Hugo) who’s ready for her tell-all. Hugo hires an unknown magazine reporter, Monique, to give her exclusive interviews to. And as she begins to share her legendary stories...Monique begins to do some thinking of her own. Why was she really picked to tell this story? What’s actually going on here? The connection between her and this glamorous Hollywood star will keep you glued to the page. Plus the tales about Hugo’s seven husbands are totally worth staying up late for. (Amazon, Apple Books, Bookshop)

It was the best of times. It was the worst of times. It’s a tale of two...sisters in 1980s Atlanta in this gripping novel from Jones. It’s a cinematic and tense story that centers on James Witherspoon’s two families — namely his two teenage daughters Dana Lynn Yarboro and Bunny Chaurisse Witherspoon. Only one of them knows that their father is a bigamist and that the other exists. The book is split into two halves: the first told from Dana’s perspective, the second from Bunny’s. And as the girls form a relationship, you’ll be waiting for the truth to come to light. Get ready for an emotional roller coaster, courtesy Tayari Jones. (Amazon, Apple Books, Bookshop)

“The Silent Patient” by Alex Michaelides

One category of page-turners we can never get enough of: psychological thrillers. In this 2019 bestseller, a famous painter violently and inexplicably kills her husband — and never speaks another word. She’s then sent away to a psychiatric unit in London, where she meets a criminal psychotherapist who sought her out in an attempt to get answers about her heinous crime. It has Agatha Christie meets modern Hitchcock vibes, and the insane ending will make you want to talk to anyone and everyone about it once you finish. What are you waiting for? (Amazon, Apple Books, Bookshop)

“The Secret History” by Donna Tartt

This 1980s-set campus drama for the win. If you’ve read Tartt’s other masterpiece “The Goldfinch” and haven’t picked up this one yet, this is your cue. And if you haven’t entered the Tartt universe...welcome. This book is the perfect spooky-season novel: it’s got mischievous, reclusive students who break bad at a liberal arts college in Vermont. They all study Greek under an eccentric professor, and before you know it these ultra lived-in characters are self-destructing (read: participating in devilish misconduct). Even though it was published in 1992, trust us when we say it’s still a page-turner almost 30 years later. (Amazon, Apple Books, Bookshop)

“Born a Crime” by Trevor Noah

When it comes to books we can’t put down: Nonfiction that reads like fiction is right up there at the top. In “Born a Crime,” the TV host opens up about his childhood growing up as someone half white and half Black in South Africa under apartheid. He writes candidly about the complications and tumult that came from walking around as “a light-skinned child” with his Black mother. It’s electrifying, heartbreaking, eye-opening, and unputdownable all at once. (Amazon, Apple Books, Bookshop)

PS: Here are some more of our absolute favorite books by celebs.

“A Court of Thorns and Roses” by Sarah J. Maas

Calling all fantasy fans. Yes, we mean you, “Harry Potter” and “Game of Thrones” stans. This sexy series (emphasis on the sexy) follows a 19-year-old huntress who is captured and brought to a treacherous magical land she’s only heard about from stories growing up. She begins a sizzling romance with her captor and is ultimately tasked with uncovering hidden secrets and saving the world. Casual. It’s considered a loose retelling of “Beauty and the Beast” and is filled with the hallmarks of a great fantasy story: love, loss, choice, violence, mystical beings, complicated family dynamics, politics...the list goes on. It’s the perfect read for anyone who loves being a part of an active book community. Plus it’s being turned into a series for Hulu by the team who adapted “Outlander.” (Amazon, Apple Books, Bookshop)

’Cause baby now we got bad blood. This 2018 book of investigative nonfiction is about unicorn health startup Theranos — and its verrry steep fall from grace. Spoiler: Founder Elizabeth Holmes went from wearing black turtlenecks a la Steve Jobs to being the black sheep of Silicon Valley. The book charts the company’s downfall (read: scams) in shocking detail, and once the revelations start coming, they don't stop. (Amazon, Apple Books, Bookshop)