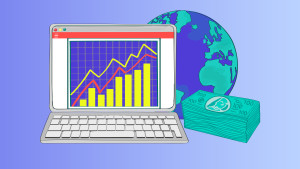 If school subjects had personalities, Econ probably wouldn’t be life of the party. But, spoiler alert: it’s what makes the world go ‘round. And directly impacts how much you pay for stuff, what happens to your investments, and whether it’s a good time to find a new job. We Skimm’d the basics.

Bubble: When the price of an asset (like stocks or housing) grows so fast, it’s unsustainable. When it eventually pops, it deflates a lot of wallets, too.

Consumer Confidence: A measurement of how people feel about the economy now and where it might be going in the future. More confidence = more spending. Spending more stimulates the economy. And around we go.

Currency: The dollar, peso, pound, and other flavors of money used for the exchange of goods and services in a certain country.

Exchange Rate: How much your country's currency is worth in another country with a different currency. A strong exchange rate means your money buys more stuff while you’re OOO and overseas.

Federal Reserve: America’s central bank. Its main job is to keep the economy growing. Its go-to levers: adjusting interest rates, setting rules for other banks, and making sure you can access your money when you need it. Just kinda important.

GDP: Aka Gross Domestic Product. That’s the total value of all things made and services provided in a country within a certain time frame, like a year. It’s used to track the overall health of the economy. Basically, America’s Fitbit.

Inflation: The increase in the price of goods and services over time. Like your in-laws, it can be good in small doses: a little inflation helps businesses grow because consumers aren’t waiting for lower prices to buy. Which fuels the economy.

Quantitative Easing: When a gov increases the money supply to encourage lending and investing...and boost the economy. But some think short-term solutions can lead to long-term issues. Like too much inflation or a devalued dollar. Mo money, mo problems.

Recession: When the economy declines significantly for at least six months. Side effects include high unemployment, unhappy investors, and the Federal Reserve playing Coldplay’s “Fix You’’ on repeat.

Supply and Demand: The relationship between how many people want something and how much of that ‘something’ is available. Reader’s Digest Version: high demand + low supply = higher prices.

Tariffs: A special tax one country adds to the imported goods from another country to make them cost more. It’s meant to hurt foreign companies because their prices won’t be competitive. But domestic buyers feel the pinch, too.

Unemployment: The percentage of people in the US who don’t have a job but are actively looking for one. Gives you a good idea how fierce the competition for the trending jobs on LinkedIn might be.